Review: A Man for All Seasons by City Theatre Company
by Brian Paul Scipione

A Season for a Fall

It’s good to be king, as the saying goes, you have absolute power and most of your desires are readily fulfilled.  Everyone loves you, or at least they pretend to. . . ahhh, there's the rub. The pandering sycophants and your truest friends are forced by fear of the executioner’s axe to be pretty much one and the same.  An honest opinion is hard to find. This is why King Henry VIII tells Sir Thomas More when they are alone together, “Your sincerity is water in the desert.” That very sincerity leads to More’s fall.

The situation is dire indeed. The King wants a male heir but his wife has not provided him with one, so he seeks an annulment  the Pope will not grant. The King isn't about to take the pope's refusal. He’s prepared to sunder the entire country from the Catholic Church and create a whole new independent structure if that’s what it takes. And of course, that is exactly what it takes. 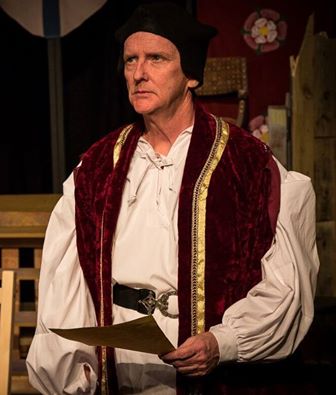 Everyone falls in step with the plan except for Lord High Chancellor Thomas More. The story of one’s man’s stark loyalty and yet determined resistance to his king is captured as dramatic gold by Robert Bolt’s 1954 play A Man for All Seasons. It's firmly in the contemporary repertoire, having been performed successfully for more than fifty years and inspired a 1966 multiple-Academy-Award-winning film starring Paul Scofield and Orson Welles.  The title comes from a 1520 quote from Robert Whittington: “[Thomas] More is a man of an angel's wit and singular learning. (…) And, as time requireth, a man of marvelous mirth and pastimes, and sometime of a sad gravity. A man for all seasons.”

Austin’s City Theatre Company has been been improving every year of its decade of existence. They have a track record of taking on classic dramas (Waiting for Godot; A Streetcar Named Desire; Night of the Iguana: 12 Angry Men; Wit; Death of a Salesman, and more) that makes them the leading choice  to undertake this long and serious, historical work. Not only is their execution razor sharp but this cast breathes new life into a very dated piece.

With recent tawdry political events and confrontations dominating our television, radio and social media streams, the story of a politician with unshakeable integrity and steadfast moral values is heartening and invigorating. Early in the play Cardinal Wolsey warns Thomas More, “Your conscience is your own affair, but you’re a statesman.” In other words, please keep your convictions to yourself.

Thomas More cannot conform himself with that advice. The dramatic action of the play is shaped by the increasing pressure from all corners to bend to the King’s will. One by one his allies leave him. His resolve remains.

Particularly relevant to our own day are More's repeated attempts to use clever rhetoric and philosophical rationale to assert to himself and others that he's not defying his king. At no point does he actually state that the king is wrong; he just can’t bring himself to say the king is right.  Today such a speaker would be accused of waffling or playing both sides of the fence, but it's evident that barbs and attacks wouldn’t even ruffle his feathers. When the Duke of Norfolk tries to understand More’s stance, he is thwarted with the simple reply, “I trust I have made myself obscure.”

Yet the truth couldn’t be farther from this gibe. More’s stance is as a clear as the summer skies of West Texas. All the others in the play are manipulating their principles like toddlers wiedling chess pieces. King Henry asks More, “Does a man need a pope to tell him when he’s sinned?”  To More the answer is obvious, but to the king the answer is not fixed. 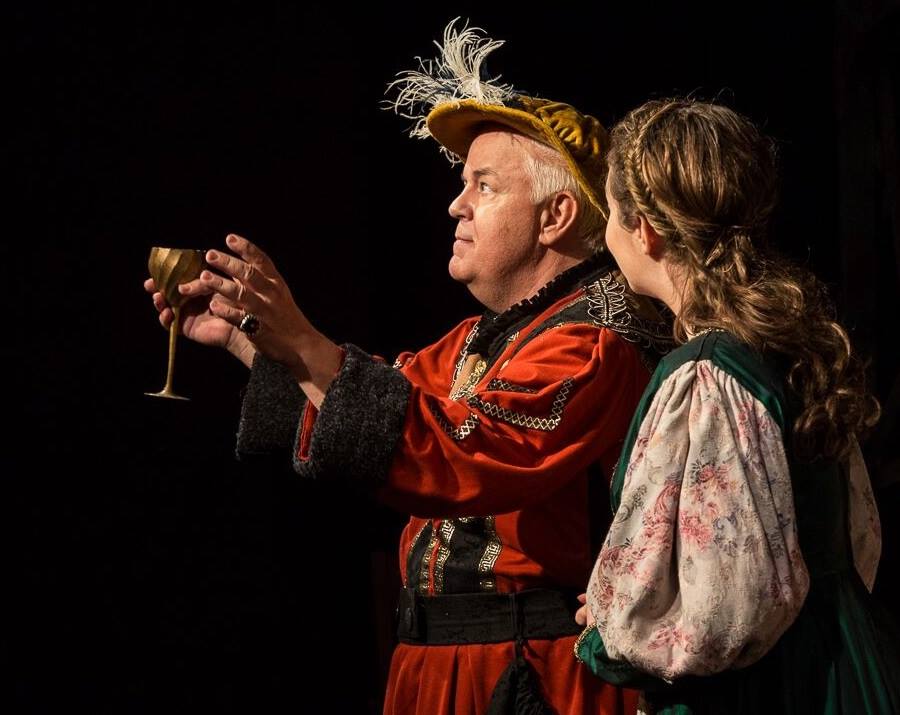 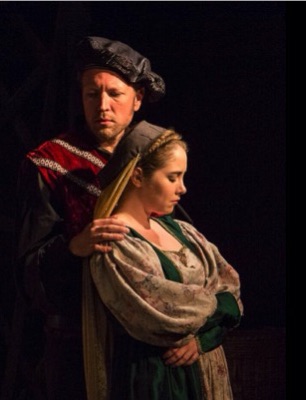 City Theatre Company’s production has very stark lighting and sound design. Music lilts by in the background as sound effect, not as emotional underscoring. The lights calmly reflect the locations: down by the riverside or in the main hall of the house.  Costumes are period accurate, fully detailed, and impressively inspired in every detail.  Gold chains, bright flowing robes and hats are abundant. The outfit of the Spanish ambassador informs the audience what kind of man he is. The opulence of the Spanish empire that he represents is replete in every fold of his peacock-like robes and the shine of his multiple pieces of jewelry. More’s humbler robes portray his true nature as well.  I cannot be sure if it was intentional, but during certain moments his tri-cornered hat appeared as either a crown or a coxcomb depending on how it was placed.

Garry Peters played multiple roles representing the lower-class Common Man, attacking each character with devilish relish. Peters  literally dons the many hats of the character types he cycles through: from sailor’s cap to gaoler's hat to jury member’s derby. With acerbic glee and rakish grin he punctures the follies of the big-talking politicos while emphasizing his own characters' focus on making a few coins so as to survive another day.

Levi Gore as King Henry VIII practically explodes on to the stage. The king is a comet composed entirely of ego. His antics are hilarious but at the same time borderline perverse, exactly what one would have imagined of the real Henry VIII.  The comic relief he brings to the middle of the play is like, well, water in the desert. Gore's coy smile and bounding energy reminded me so immediately of Jack Black that I wouldn’t have been surprised to see him do a cartwheel while exiting. By contrast, this level of humor make his moments of anger and sleaziness all the more real. His angry grasp of More’s head and his lascivious approach to More’s daughter are completely unnerving. 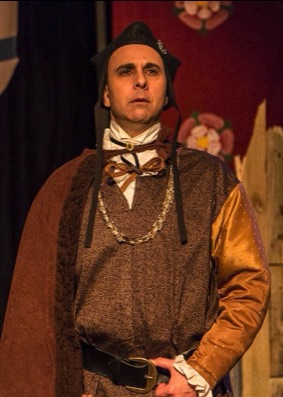 Scot Friedman slithers across the stage as Oliver Cromwell. I couldn’t help but think of Johnny Depp’s recent performance as Whitey Bulger in the film Black Mass. Here's a person with poise and a certain level of charm who at any moment may lunge out and bite you. Friedman rolled out his lines with expert deliberation. In another actor's mouth the line, “You brought yourself in. In another sense I was brought” might be confusing. Friedman leaves no doubt about the stark threat hidden in those words.

Every actor in this cast delivers an excellent performance. Roy Mulin as the title character is no exception. He achieves one of themost challenging performance tasks of theatrical art: appearing at the end of the action as a completely different person from that he was at the start. The adversities, the painful loss of familial support, and the harsh toll of sticking to his principles emanate from him like radioactive energy. You want to shout at the director, “What have you done to this man?”

Even if you don’t understand or care about what Thomas More is fighting for, you have gone through the battle with him. Your heartstrings are yanked into taffy and your skin is marked with permanent goose bumps.

More summarizes this experience in the closing of the work. “What matters to me is not whether it’s true, but that I believe it to be true.”

And so it is with this performance. These events may not be actually happening but they feel as if they are.

A Man for All Seasons
by Robert Bolt
City Theatre Company 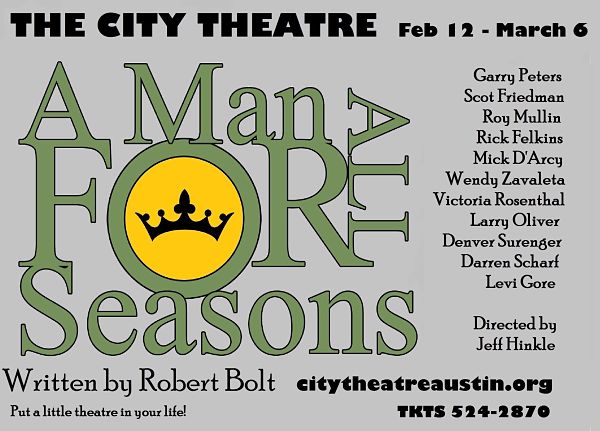