Review: The Sound Inside by Jarrott Productions
by David Glen Robinson 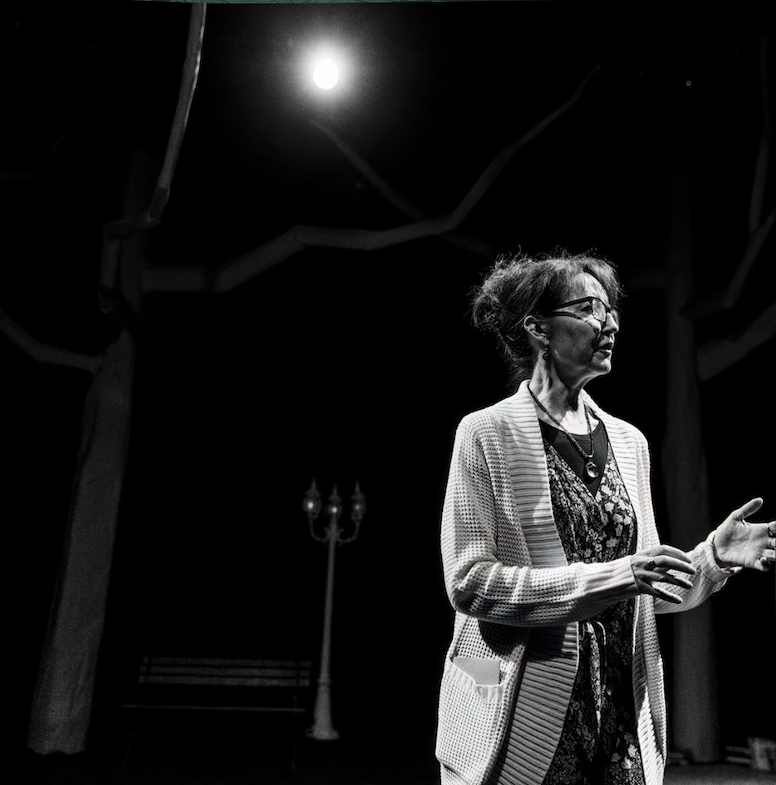 The Sound Inside by Adam Rapp shakes the earth without arrogance or condescension. With this and recent productions Jarrott Productions has found its stride on a high plateau of excellence in production and theatrical art. Much is due to the dramaturgy of Producing Artistic Director David R. Jarrott. In The Sound Inside, much of the excellence is brought to the audience by actor Rebecca Robinson, who plays fictional Yale faculty member Bella Baird. All of it is heightened by the imaginative and spacious playground of Ground Floor Theatre, in which the play is staged for Austin audiences.

The play traces the life of a reserved professor of creative writing and literature at Yale University, a character anyone who has attended college classes anywhere has encountered. One wonders about such specialized creatures and whether their private or interior life is as rich as the subjects they teach. We learn that Bella feels deeply unfulfilled, and this speaks to the title. Never married, child-free, driven only by letters, and parenting neither a cat nor a dog, Bella wrote and published a novel seventeen years earlier. A reviewer dismissed it as “tepid.”

Bella takes that as one cue among many that her career and possibly her life may end far short of her dreams, in pursuit of which she sacrificed nearly everything. The fluttering batwings of death hover about Bella throughout. She tells us that her father died early and her mother died a lingering cancer death. What Bella clings to is her exceptional creative writing course at Yale, complete with realistic writing exercises given to unappreciative upper-class students. Many of her exercises use Dostoevsky’s Crime and Punishment. Oddly, otherwise she drops the names mostly of contemporary writers from the twentieth and twenty-first centuries.

An unruly and ungovernable student starts coming to Bella’s office hours without an appointment.  He is rule-breaker Christopher Dunn, portrayed by Tucker Shepherd with all the enigmatic qualities the character requires. Dunn is brilliant, looks down on the upper-class students, and hails from Burlington, Vermont. He claims his mother is Joyce Carol Oates, as have we all from time to time. Eventually he asks Bella to read a novella he is writing. The narrative in first person tells of murdering another character with a tourist souvenir Statue of Liberty statuette. The protagonist later presents the murder weapon to his mother as a gift. The story resembles a twisted, murderous take on Catcher in the Rye. Bella finds it innovative—charming, possibly unique. Christopher has gotten into her circle of caring, and Bella manifestly needs a friend. The acme of their intimacy comes when Christopher tenderly touches Bella’s face. After that, he becomes hard to find, and rarely attends class. 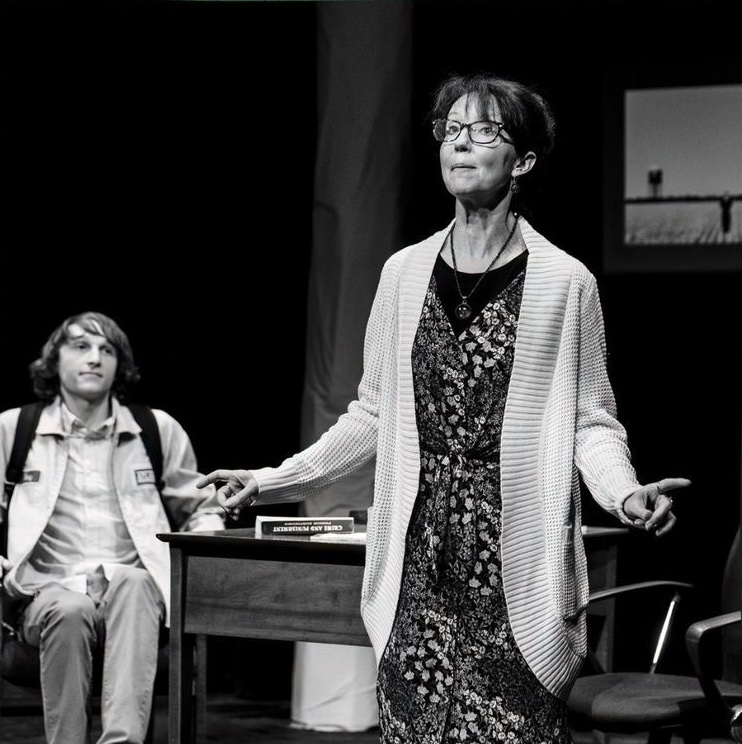 Christopher introduces the theme of suicide, sarcastically rattles off a long list of contemporary writers who took their own lives “to draw attention to their work.” It starts with Hemingway and includes (but isn't limited to) Sylvia Plath, Anne Sexton, and David Foster Wallace, 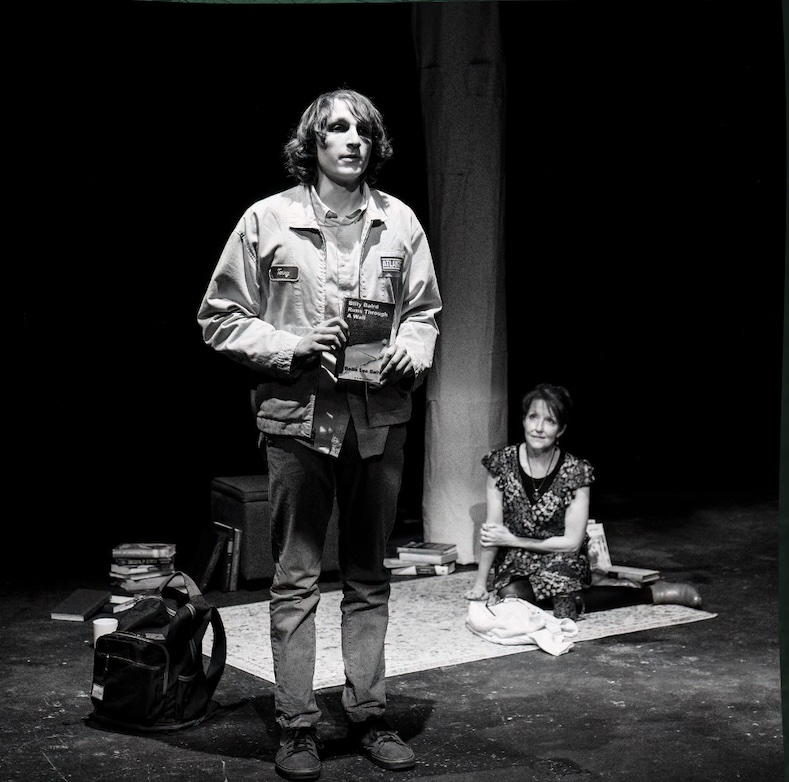 The Sound Inside has a strong metatheatrical structure, almost like Our Town. The play starts with actor Rebecca Robinson downstage center as Bella, describing herself in third person peering into a darkened house and musing on how the audience will respond to her. Thereafter, Bella plays her own narrator with a long introductory monologue on herself and her family, conversationally to the audience, describing her thoughts about Christopher. Throughout the play she narrates the transitions to different scenes. She slides imperceptibly into direct dialogues and out again. Eventually, all the textual, spoken material stays within the frame of the story universe of Bella and Christopher in New Haven. Robinson, playwright Rapp, and director Jarrott seem made for each other. 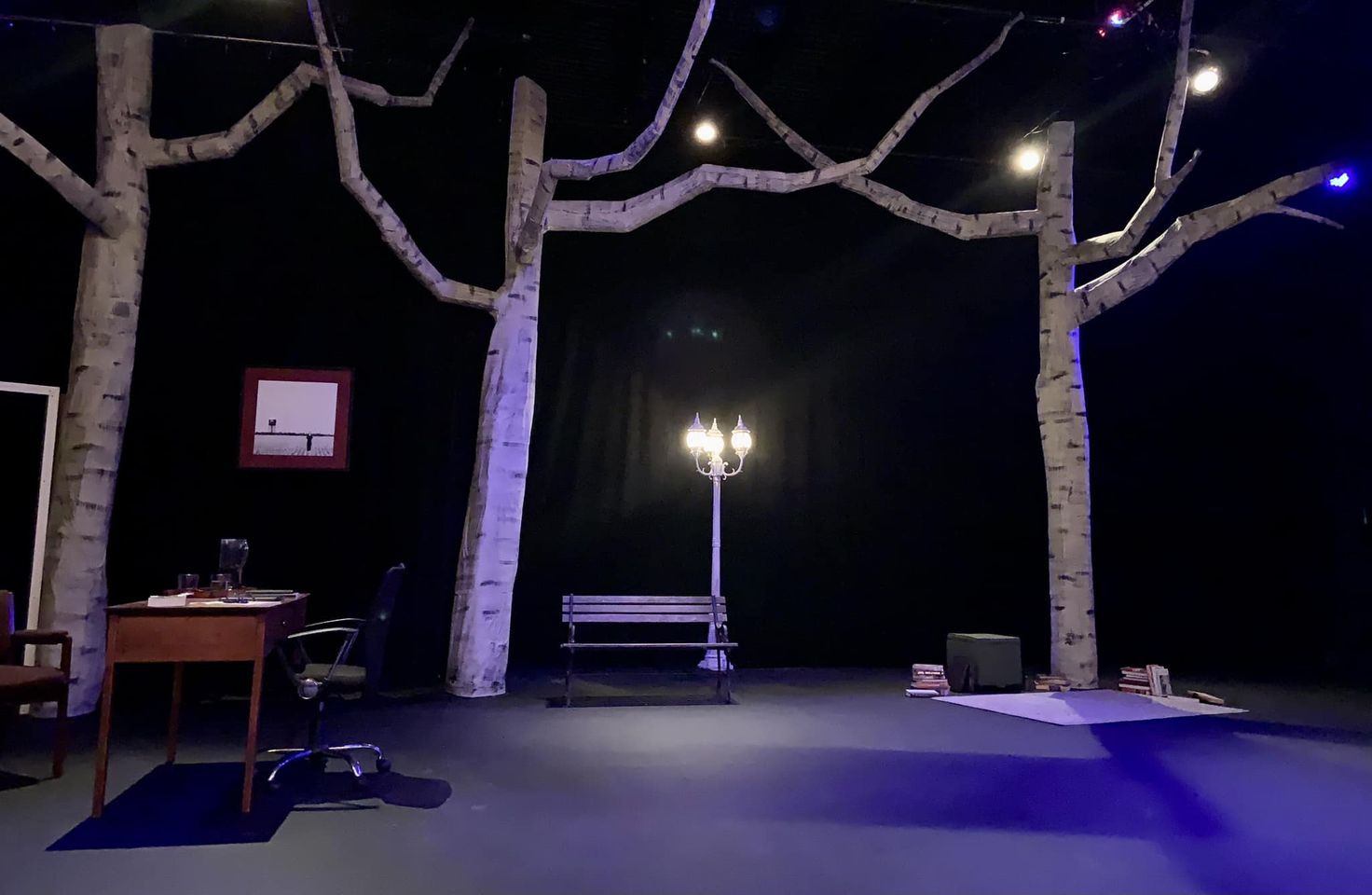 Much of this smoothness and deftness stems from the set and other design fields. A perusal of photos of other productions of the play shows an emphasis on dull office and classroom interiors. Jarrott Productions has none of that. The company places the birches of New Haven upstage in winter guise, stripped of leaves and rising to the top of the Ground Floor Theatre stage space. Beneath their immensity, interior scenes follow the “pools of light” staging concept with lights fading up on furniture and props in place only as actors enter the playing space for that scene. The concept was also used in Jarrott Productions’ recent The Lifespan of a Fact. Robinson moved skillfully while dealing with the complex blocking scheme required by this set. Zane Bares receives the credit for scenic design.

At one point, Robinson delivered a few lines outside the well-lit areas of the stage. She was dimly lit. In fact, there was no light across her face and head. My first thought was that she had missed her mark. Then it became evident that she was musing upon a very dark subject. The darking design was as clever and apt as the lighting design. Alison Lewis receives credit for both.

Kudos to projections designer Lowell Bartholomee for the snowfall that rose to a blizzard and blew across the birches and park bench as the alienated Christopher Dunn stumbled through. That brief bit created transformative imagery.

There was one significant flaw in the play. The State of Connecticut wrestles with an assisted suicide law but does not have one yet, to the knowledge of this reviewer. Any potentially depicted act of such assistance should acknowledge the current legal status in Connecticut, even if in defiance, and not leave the lsituation implicit or entirely unacknowledged. The lack of any such recognition in the play is a misstep by playwright Rapp.

The Sound Inside is highly recommended for adults with a literary bent. It plays at Ground Floor Theatre in East Austin from January 13 to 28, 2023.

The Sound Inside
by Adam Rapp
Jarrott Productions 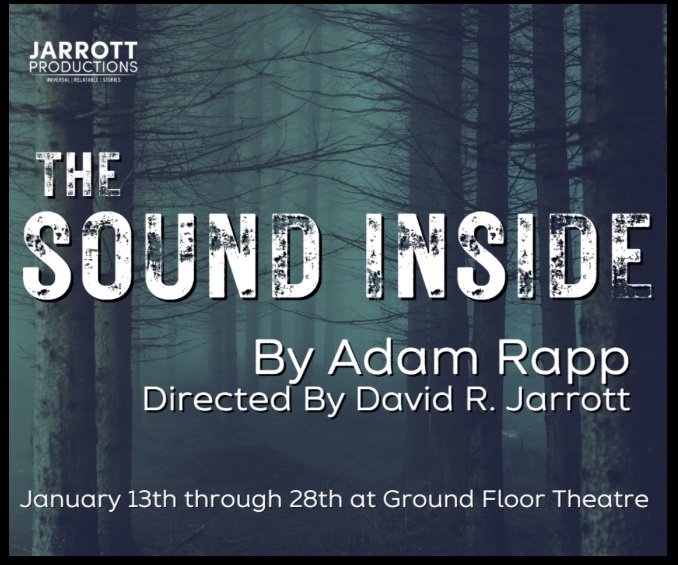