Review: Straitjacket: Variations on a Theme of Horror by Charles P. Stites
by Michael Meigs

I’ve been avoiding you the way your principal character Dr. Daryl Standing tried to avoid Chin Lo, the murderous leader of the San Francisco tong wars.

Not because I wanted to. No. Like Daryl Standing, I was intimidated, seeing failure and pain looming before me. Chin Lo took a month to execute an earlier offender, chopping pieces off him bit by bit, until the victim actually began to look forward to the pain and to ignore the death that would inevitably result.

In his monodrama Straitjacket, presented from September 2 to 11, 2021 at the Vortex, Charles P. Stites uses the structure of Jack London’s 1915 tale The Star-Rover to project the central character, Daryl Standing, to lives of other times and other places. As in London's tale, Standing—certainly an appropriate name, in terms both of posture and of endurance—finds that when punished by confinement in a cinched straitjacket, he projects himself elsewhere in time and space. There's particular urgency to this spiritual flight, for Standing is terrified by vengeance he senses is fast approaching.

Prison existence is vivid and oppressive. Stites is clad in a bright red jumpsuit that does not hinder him from instantly transforming into other characters — initially the tough-ass prison guard and the junior warden following behind like an obedient puppy, but many others subsequently, through other lives and stories.

Stites gives us a frightened but dutiful little boy with a mother rendered vegetative by a stroke, the boy’s stern, unsympathetic father (“Are you a Gideon man, son?”), a storekeeper, and an eerie, warmly sympathetic woman who becomes young Seth’s secret friend and then his seducer/executioner. In episodic form, at the horrific conclusion of each of the other existences to which the immobilized Standing transports himself, the prisoner rawakens once more within the confines of the straitjacket. The second story is one of an earnest but uncertain priest in the America of the conquistadors, an honest man afflicted by self doubt, proud of a single convert who will turn renegade and outraged by the libidinous transgressions of his own father confessor. The third story is of a simple-minded Palestinian woman named Mary in times of Roman occupation who becomes pregnant and delivers a child named Jesus.

The finale of the last return to prison seethes with apprehension, distrust, and brutal deception. We never understand whether we are deep within the delusions of a man’s mental illness or simply travelers in time and space while Standing seeks refuge from the vicious vengeance of Chin Lo, whom we never see. It is not clear whether the tong leader even exists, but evil is definitely present with Standing in his prison cell.

I wasn’t there at the Vortex. Like Daryl Standing, I was transported to a distant place, far from the Texas of COVID and deranged lawmakers. I might have missed out on Straitjacket entirely, but Vortex Managing Director Melissa Vogt provided a link to a video of the performance.

The problem was that when Charlie’s stories became too intense, too heart-stopping, I had a resource denied to the live audiences. I could turn him off and — unlike audiences receiving the live stream — I could eventually turn him back on.

And I did. The first time at the 50-minute mark of this 85-minute performance.

It was like having an imaginary monster under the bed. You’re terribly fascinated by the threat and yet can’t quite work up the courage to lean over and take a look. When I resumed, I took it to within the last ten minutes but couldn’t bear to sit through the victimization of Mary in ancient Judea. It took several days to steel myself to face, embrace, and endure the concluding doom-filled moments of Straitjacket.

That’s not criticism, at least not in the sense of negative response or rejection. Charles Stites is such a gifted actor that he renders these haunting stories too intense to bear. It actually helps to be trapped in that black-box space with him. My agony, like that of the protagonist of Straitjacket, spanned a much longer period. For me, the full ten days following my return to the United States from a serene séjour in the mountains.

Robert Faires, now freed of his responsibilities as arts editor of the Austin Chronicle, did attend Straitjacket and agreed with me about the power of Charlie’s performance.

What intrigues me and sets me so ill at ease is Stites’s choice of stories. Prison and a straitjacket and astral projection provide a framework; but the tales are all of victims, well intentioned innocents who are duped by systems of belief firmly in place around them. Young Seth yearns for love, which comes only from a spectral witch luring him toward death; Padre Benicio yearns for faith and righteousness but is betrayed by his father confessor and by his protégé; and Mary, poor Mary, does not understand where her son came from or why he is put to death.

Daryl Standing’s mind is in ferment and delusion, providing his sadistic warder a victim to torture and push toward suicide.

Stites cited many of his inspirations/sources in the initial announcements of this piece. They are eclectic, as to be expected of a writer who reads widely and compulsively, especially from the canons of 20th-century English-language literature. The phrase that leaped out at me was his citation of “all the Baptist church Sunday school classes I was dragged to as a child and the subsequent nightmares they inspired.”

These are the musings of a highly intelligent man facing the dilemma of the finite nature of our lives, the shortness of our existence, and the fading of hope. He says as much, though in other words, terming Straitjacket “a story of madness and violence, and the terror of eternity.” Stites has the boundless ambitions of a sensitive, spiritual man and the grit of one with no expectation of redemption. Those huge, contradictory feelings and attitudes collide over the basic questions of existence and the meaning of life.

Due to the ongoing Pandemic and Stage 4 restrictions, The VORTEX requires masks for all in-person audience members.

Blue Star Theatre: Discounts for Military, Veterans, and their families.
Radical Rush Free Tickets: Limited free tickets for each performance in the spirit of sustainability, accessibility, and the gift economy. Radical Rush tickets released one hour before each performance--in-person only. 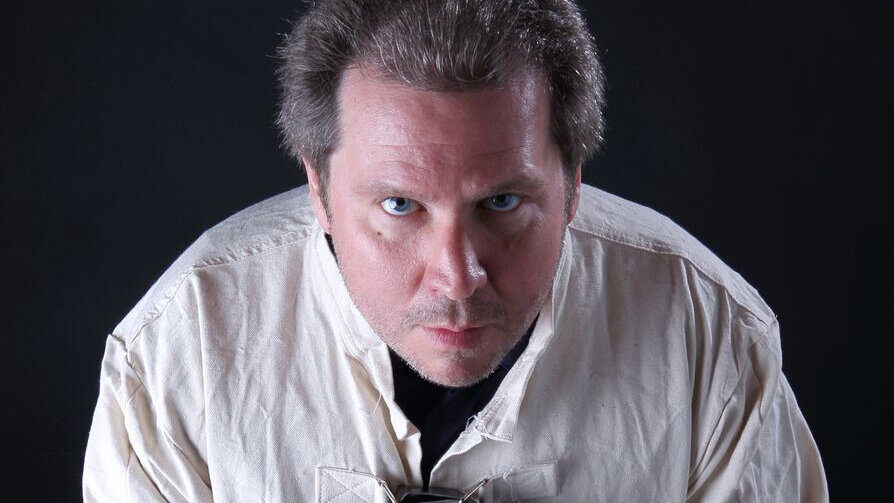