Review #2 of 2: HEDWIG AND THE ANGRY INCH by Zach Theatre
by Michael Meigs 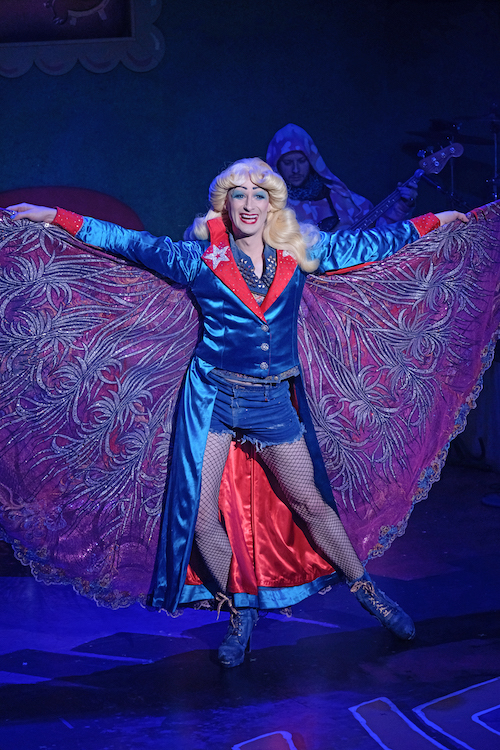 Hedwig is twenty years older now than when s/he first came out on American stages, but in the magic bubble of theatre s/he hasn't aged a day. Director Dave Steakley put on an Austin version of the 1998 Broadway musical in 2002, at just about the same time the movie version premiered, and it played in the snug Whisenhut theatre in the round for months. In his Austin Chronicle review Wayne Alan Brenner enthused over that staging as "aural entertainment with a heart, a keeper of a play about playing for keeps among the winners, the losers, the everyday freaks like you, reader, and me."

Zach Theatre's newly opened production is evidence that age cannot wither Hedwig nor custom stale their infinite variety. If anything, with the shifts in society over the past two decades, s/he's the distillation of gender flux and young existential dilemma -- after all, by my calculation, by now s/he's a millenial, a member of that most put-upon, demanded and desperate of generations.

A key question in this reboot in wickedly high heels must have been whether Hedwig and the Angry Inch was scalable. Could Steakley enlarge their success in the comfortable chamber of the Whisenhut to a captivating presentation in the 400-seat Topfer Theatre? No bets taken, however; given the artistic resources Zach has acquired and cultivated since 2002 and Steakley's Barnum-like flair, Hedwig II was bound to explode in Austin like 4th of July fireworks over Town Lake (oops, Lady Bird Lake). And it does.

A quick primer for those of you too young to have known Hedwig the first time around and those absent like me from the U.S. cultural scene back then: Hedwig's a rock performer, glam queerqueen, extravagant and transsexual, a refugee from East Germany (remember that? before 1989?) who was maimed by a clumsy sex-change operation and has been abandoned by Tommy "Gnosis," the young rocker from Texas s/he nurtured .

S/he's bitchy, funny, bewigged and fabulously costumed, darling, and s/he's going to tell you all about it between singing bouts backed up by Yitzhak the transsexual from Eastern Europe and a loudly competent four-member band, "The Angry Inch." The music is loud, catchy and eminently forgettable, and the sets and gags are clever. Is the Goodnight, Moon set parody by designer Stephanie Busing original to the Zach Theatre? Ach, who knows? There's so much cuteness and fun that it hardly matters: Hedwig gives us scathing reviews of imaginary children's books, takes down Donald and the Trumpistas, and tickles us with sharp digs at Austin and Texas. 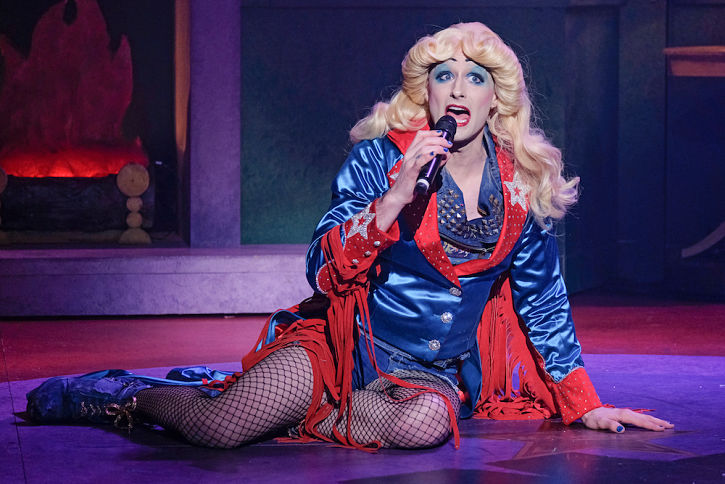 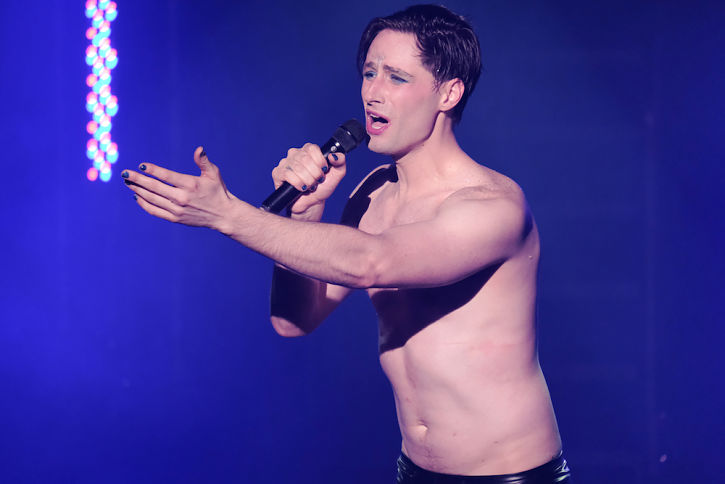 The show -- and it is a show rather than a play -- opens with colorful, brightly costumed prancing when Hedwig rides in on one of those obnoxious electric scooters and spreads their plumage. Over the course of the evening and through a series of comic but biting monologues Hedwig will gradually shed those plumes, and glam will give way to anger and pain. Daniel Rowan is onstage almost every moment, indefatigable and undefeatible; I was astonished that his bio in the program had no mention of playing this role before. The level of energy it requires and he delivers is intimidating. As his foil Yitzhak, Leslie McDonel is mute in response but thrillingly vocal in singing backups and some lead numbers that allow Rowan a few seconds of rest. Hedwig plays Wednesdays through Sundays, and I can only imagine that Rowan, for whom no understudy is listed, must spend those two days off in cryogenic storage, trying to recharge his batteries.

It's fun, it's impressive, it's kinda stupid, and it all depends on the gigantic absurd personality of Hedwig, the incarnation of marvelous. Hedwig's not my cup of -- well, Red Bull -- but it is a signal achievement. Steakley and Rowan prove that Hedwig, already larger than life back then, can be scaled up to a needy, appealing, viciously funny and achingly vulnerable monster who towers over the Karen Kuykendall stage like King Kong in a tanga and high heels.

Age recommendation: 13 and up for strong language and adult themes