Review: Significant Other by Jarrott Productions
by David Glen Robinson 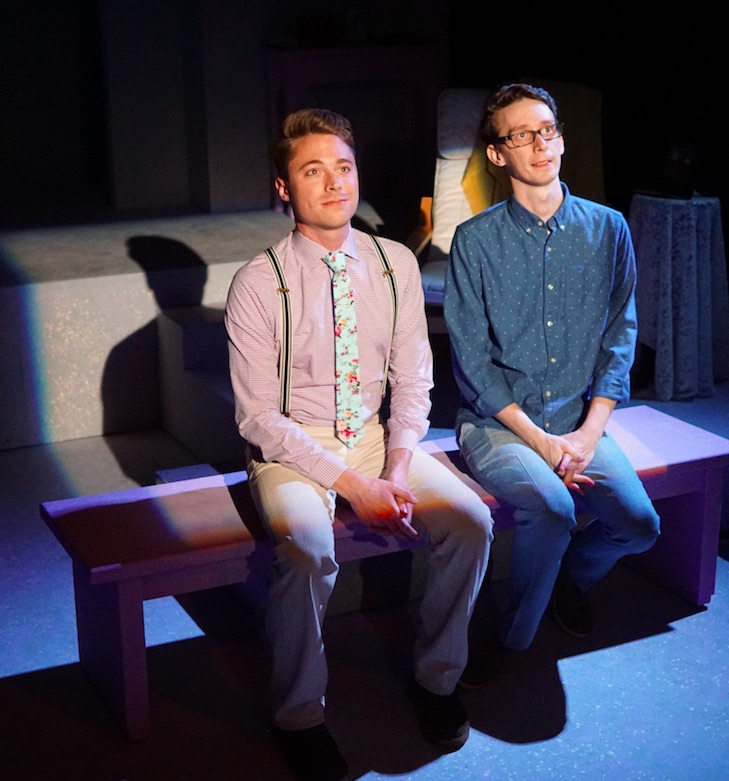 Significant Other is a contemporary play about downtown young professionals’ lives. This genre is perennially trending, and Jarrott Productions mines the niche to great success. The company takes full advantage of Trinity Street Playhouse’s geographic positioning in the Austin downtown business/government/ entertainment/club scene. The characters of Significant Other etch their lives into the landscapes of the East Coast, but their thoughts, successes, and epic fails connect immediately with urban Southwestern audiences. Their struggles are those of late twenty-somethings, but the life lessons they learn or whiff will strike the fifty- and sixty-somethings in the audience as very, very familiar.

The cast is the central strength of the production.  Will Douglas brings significant power of his own to the lead role of skinny, gangly, stereotypically gay Jordan Berman. Jordan’s is more than simply a quest for love; it's a quest for a measured existence with integrity and honor, with the low-stakes goal of just getting through one human life. Douglas shoulders lead-role burdens with the apparent ease that masks great talent. The lengthy dialogue between Douglas and Susan Myburgh as Laura in the second act-- which might be entitled “Best Friends Forever Fall Out”—is exceptionally well crafted and well-performed, and in fact it's the single greatest recommendation for attending Significant Other.  Myburgh’s Laura is essentially a co-lead; she is Jordan’s BFF, his housemate, his confidante and, in a deeper sense, his mirror. Jordan’s fundamental vulnerability is seen most clearly when life draws Laura away from him inexorably through marriage and family-building. Myburgh’s acting chops are impeccable, and her quicksilver emotionality is impressive and rare among actors. 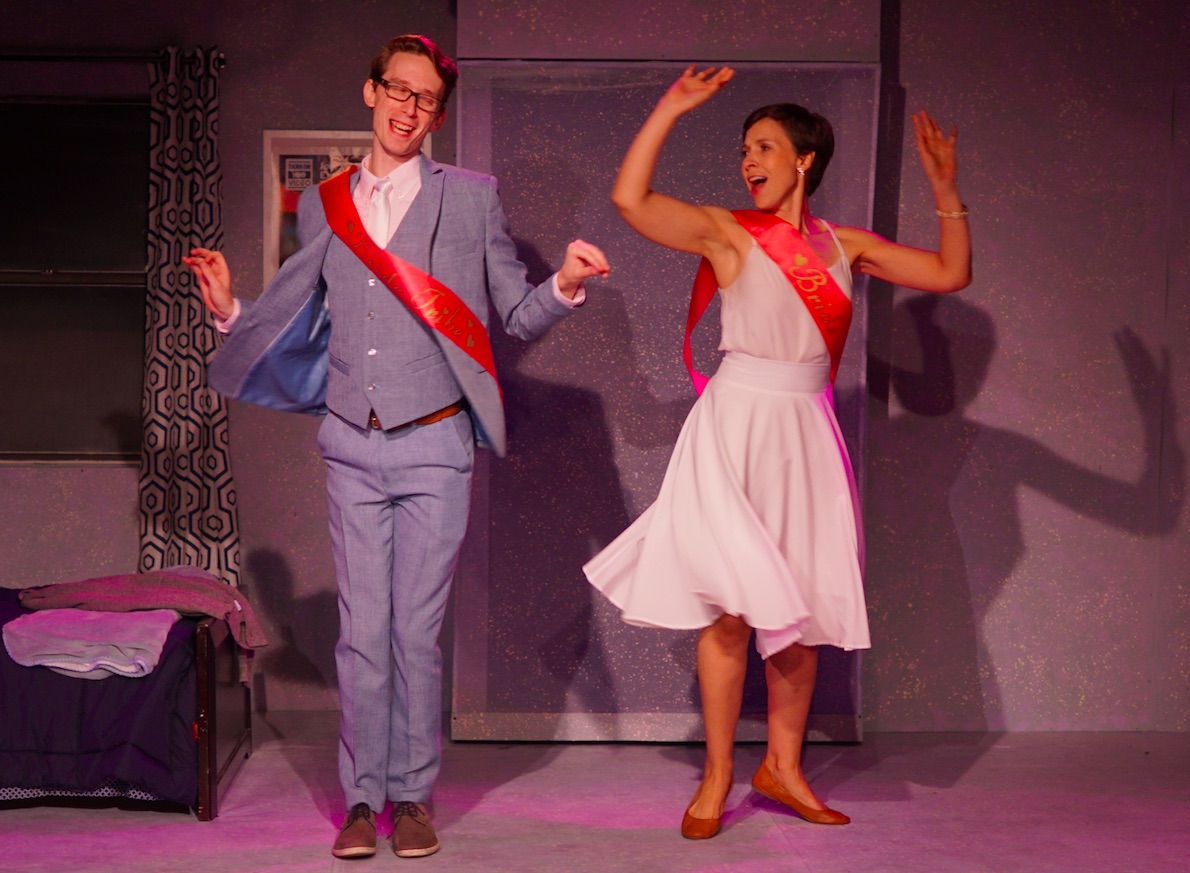 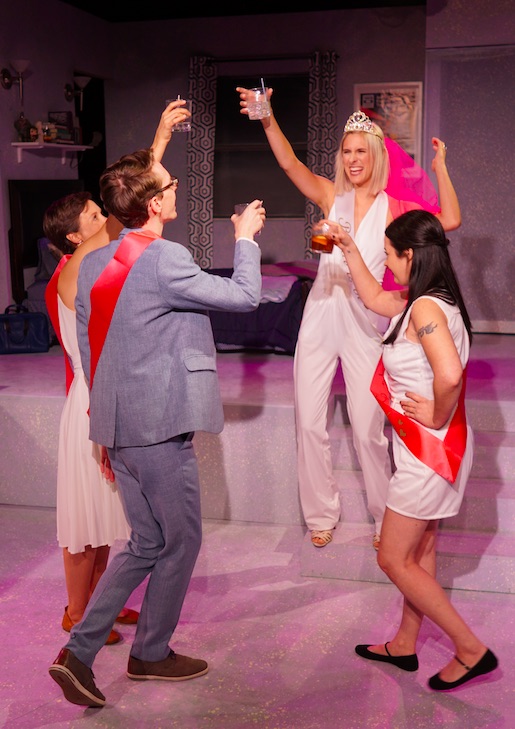 The play has an interesting structure. It runs through three cycles, repeating marriage rituals of the three young women. The action begins with a batchelorette party with Kiki in a cheap plastic tiara and all of the women in pink sashes and other party toys as may be found in Spencer’s Gifts (if the firm is still in business). The parties succeed one another with each of the girls wearing the tiara. Indeed, the play could be subtitled “The Wedding Rituals of the Tribal Urban Americans.” In between, Jordan looks for his own partners and confronts his evolving feelings.

Kelsey Mazak plays Kiki, an office friend. Kiki is the essential flibberdegibbit, all blonde surface and no depth. She is unafraid to take huge risks, largely because she doesn’t know what a risk is. The office “family” continually lurches after her to keep her from pitching over one edge or another. They cannot stop her from pitching into a marriage to an obvious jerk (Conrad, played by Tanner Smith, not a jerk in real life). Along her way, she dishes out surprisingly deeper wisdom to her friends, who come to rely on her. And she's always there to lift up the fallen. Only the most brilliant plays carve out hidden depths in shallow characters, bringing together seeming opposites into wholes of incredible richness. Such is Kiki. 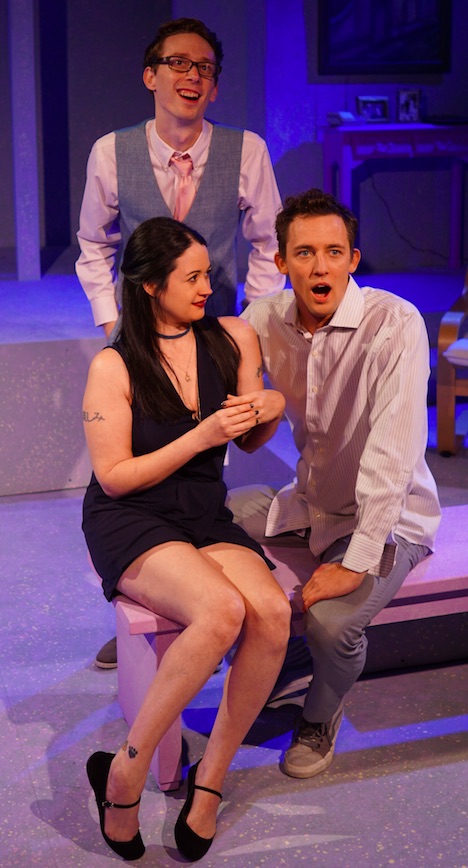 Natalie Garcia plays Vanessa, the antithesis of Kiki, who knows much more about life than Kiki and hates all of it. She is a neo-Goth, black-lipstick-wearing, frowning, dreamer of death—we’ve all known a few of those. Her negativism and one-liners sum to a poetry of existential despair. She could invent her own personality disorder, something named by Kiki in her quasi-neologism when she says, “Oh, don’t be so Pessmissmus" (pessimistic?). Vanessa has her crisis when confronted with actually going through with her own wedding ceremony.  Marriage and family will strip away her affectations and force her to map a pathway through life. One would enjoy an entire play about Vanessa alone.

Tanner Smith and Sam Howard each play three characters, the significant and not-so-significant others of Jordan and his three gal pals. They seem to have learned quick-change arts as well. Switching characters while switching hats is another rare skill in theatre arts, and Smith and Howard are well up to it.

The senior cast member is Janelle Buchanan, playing Helene Berman, Jordan’s grandmother. Buchanan has been an Austin acting fixture since the 80s.  Her bio records more than 70 Austin productions, including  In the West, Durang Durang, The Council of Love, and many more with Jim Fritzler’s legendary Big State Productions. She shows the kids how it’s done by playing Grandma in a relaxed, easygoing fashion appropriate to a character losing her powers through aging. 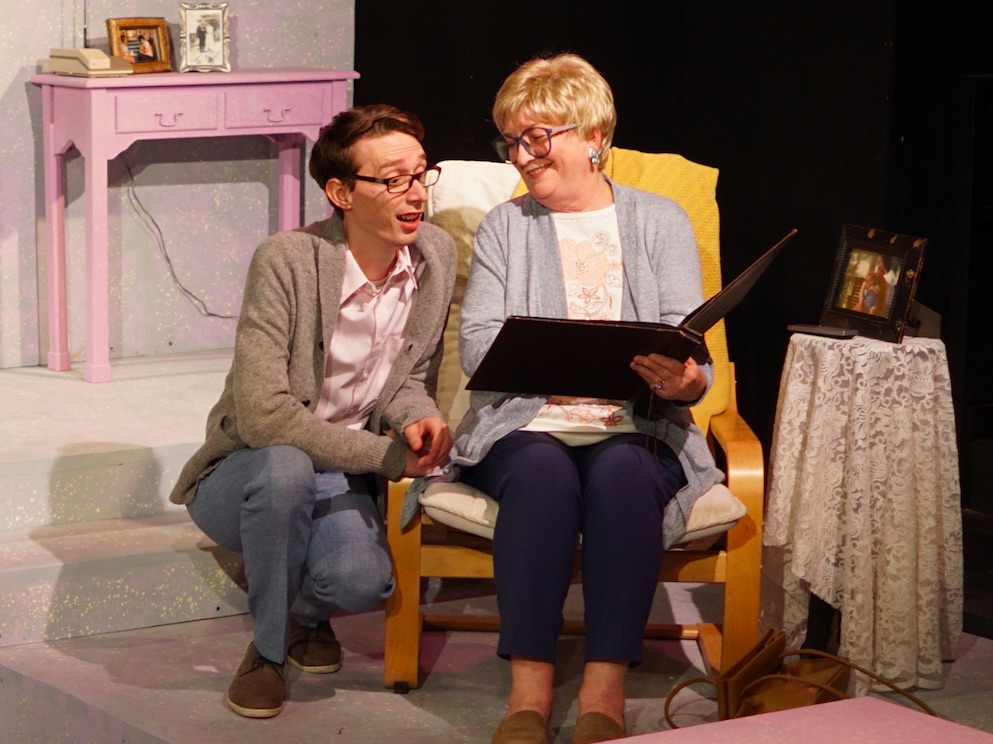 Director Dave Jarrott has done outstanding directorial work with his cast on an immensely tasteful and functional set designed by Michael Krauss that serves with little inter-scene modification as office, tiny uptown apartment, wedding event centers, and Grandma’s living room. Director Jarrott applied much creativity (read: elbow grease) to the transitions between scenes. The blocking is directed toward the transitions at all times, and minute lighting changes and an occasional sound tone to signal the audience, cast, and staff that a change is about to happen. The result is a play with scene changes that are super-quick, appropriate, and non-disruptive so that the audience follows the thread of the story. Director Jarrott clearly knows that no detail is too small not to cause a lot of insomnia. If this seems like battening on minutiae, well, other recent important Austin productions have shown no awareness or care for transition issues, to the detriment of their productions and reputations.  Have a care for your transitions.

Sometimes a play with a downer ending possesses a sort of inevitable perfection. Significant Other has this necessary but frightful quality. The fading light on Jordan’s face sets the hook in our hearts and draws us out into the cold, cold downtown night.

But don’t be afraid to hold up this mirror to your own face. Jarrott Productions is becoming the central go-to company for performing arts in the downtown theatre and club scene.  One hopes their success can grow further.

SIGNIFICANT OTHER plays Thursday-Saturday evenings at 7:30 pm with Sunday matinees at 2:30 pm, September 6-30, 2018 at the Trinity Street Playhouse, located in the First Austin Church at 901 Trinity in downtown Austin.

Tickets range from $23-$30 and may be reserved online at www.jarrottproductions.com. Discounts available for students, seniors, teachers and former teachers. Tickets go on sale August 1st. 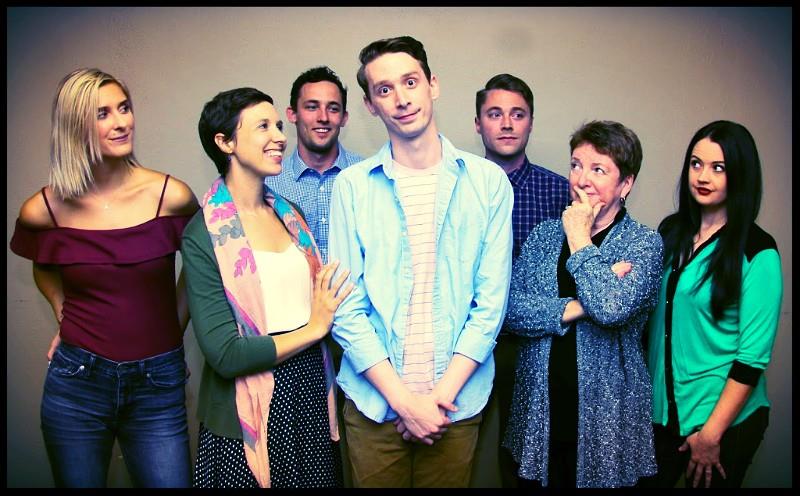 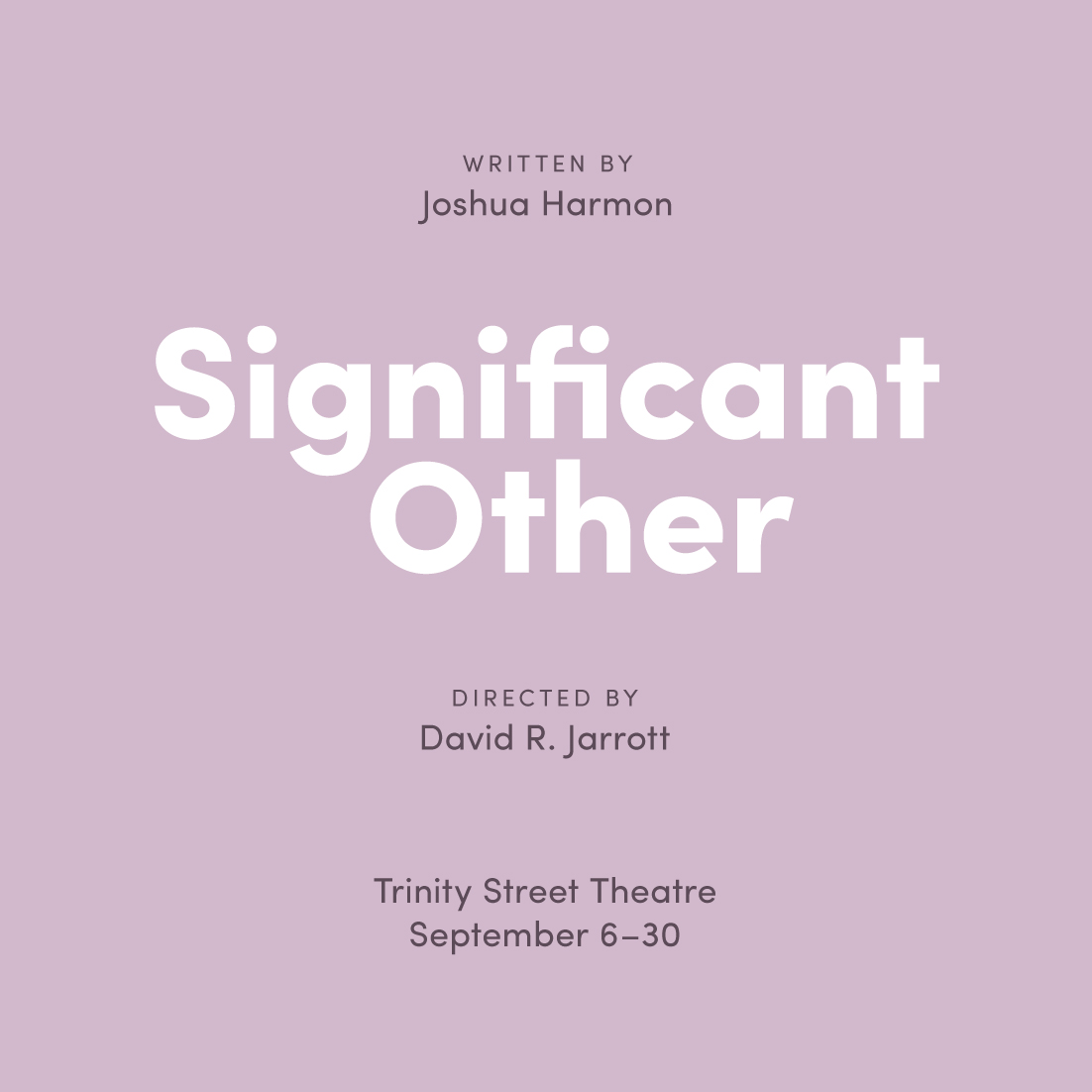