Review: The Repentance of St. Joan by Paper Chairs
by David Glen Robinson 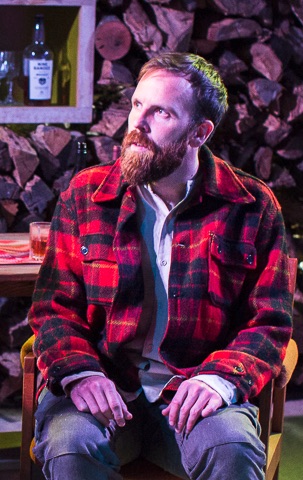 Judd Farris’ visage is a landscape.  He opens the play in monologue, speaking of what he did after the war—what war?—building villages, building churches, and working in granaries. He describes walking in snowy woodlands, and ascending a hill and its consequent aerobic effects on him. By the time he reaches the crest he has become the landscape he describes, and we trust his genuineness and authenticity.  It is time itself we cannot trust.

Patrick Shaw’s play The Repentance of Saint Joan is not about repentance, and some of its characters argue forcefully that Joan of Arc was not a saint. The play is an alt-historical work, offering numerous alternative stories and scenes of the life of Joan of Arc. It is for the audience member to grasp one’s best belief of the actuality of Joan’s past life.

This task is rendered to us as an advanced historical thought problem by means of its rapid, non-sequential race through time periods and places, many of them never involving Joan of Arc. The play is a kind of kinetoscope run wild until its flip-cards fly all over your Victorian drawing room. It reminds one also of the Star Trek television episode “The City on the Edge of Forever,” and its time portal on endless runaway flicker, but without Scotty, Spock, and McCoy available to figure out how to drag Kirk out of the damn thing back into Star Trek space-time. 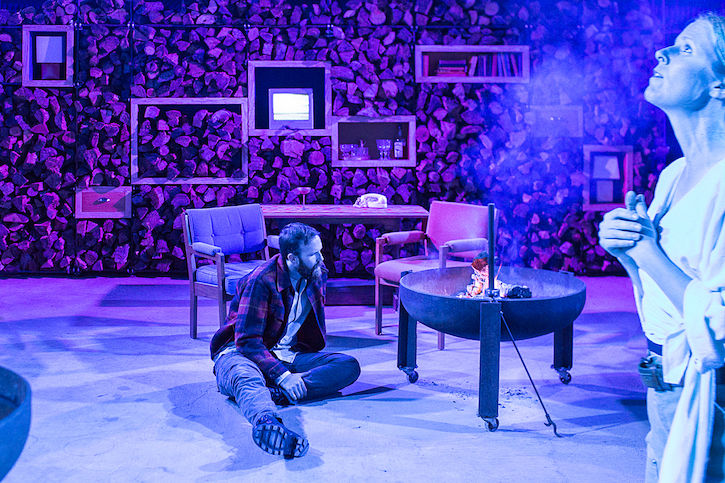 Not all of theatre is reducible to the tropes of old Star Trek shows. The freshness of The Repentance of Saint Joan is its freedom to change space, time, character, and tone from one phrase of dialogue to the next. This is made possible only by the strength of the gifted, flexible cast of Judd Farris, Jess O’Rear, and Elizabeth Doss. Their characters are multiple and mutable. For example, Me, played by Judd Farris, who was Joan’s page, partner, and childhood friend among other characters, seeks out Stephen, played by Jess O’Rear. Me has malicious intent to kill Stephen for condemnable violations of fact in Stephen’s video documentary on Saint Joan. We learn in the meeting of Me and Stephen that Stephen is variously a respected historian living on the East Coast, an authorized chronicler for King Charles II, a transgender historian in a luxury apartment in Paris, the sister of Joan of Arc who skipped the Hundred Year’s War hiding out as a student in Vienna, and probably a few characters this reviewer missed. Which Stephen will figure out Me’s malign intent? Which Stephen will compute the algorithm to avoid the murder? 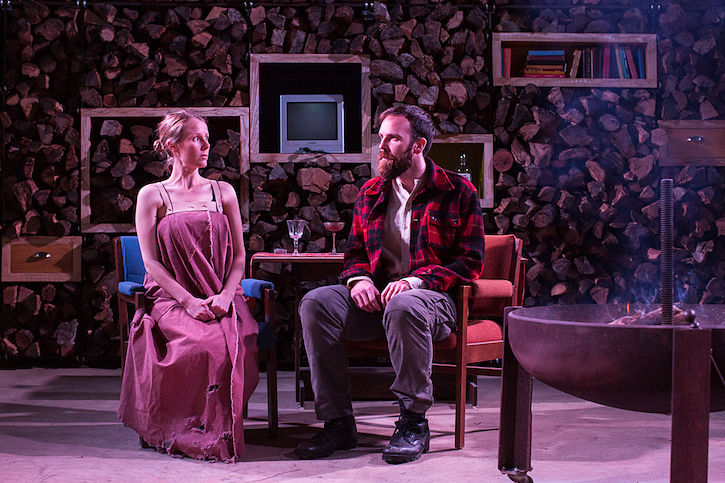 This wide set of characters embodied by Stephen also allows a mental self-conversation on the uses and abuses of history -- not that this was even part of the point of the play. Dragging in history and historiography is designed to key the audience on how history is still being used in the ongoing mythologization of Joan of Arc, wildly varying in every country in Europe and North America. The Repentance of Saint Joan is anything but a flat-footed history play. 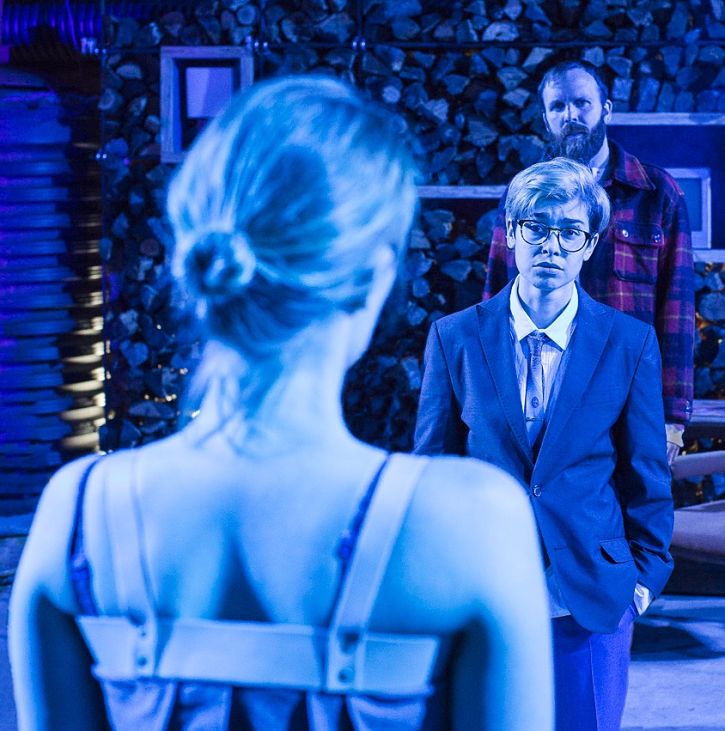 Paper Chairs has made a reputation for spectacular production and design values, and The Repentance of Saint Joan is no exception. Its first advantage is presentation at Pliny Fisk’s and Gail Vittori’s Center for Maximum Potential Building Systems in East Austin, where the stage was built into an existing pavilion. The set design by Lisa Laratta once again offers glimpses of her imaginative range, this time with a motif beckoning to forests and woodlands. Without giving anything away, it is fair to say the set will enchant the lumberjack soul deep within everyone.

The lighting design is by Natalie George and Sadie Langenkamp, and the highly functional costumes are by Aaron Flynn. The standout video design is by Lowell Bartholomee, who crafted a few minutes of a video faux-documentary on the life of Joan of Arc. A special credit goes to the co-directors, Elizabeth Doss, Lisa Laratta, and Patrick Shaw, who kept a very complex play on the rails directly from text to performance.

The Repentance of Saint Joan is highly recommended to any adults who love the interplay of history and theatre, especially in this era of illumination and re-illumination of the most significant female personages in history.  The play runs from March 23 to April 7, 2018.

The Repentance of Saint Joan
by Patrick Shaw
Paper Chairs 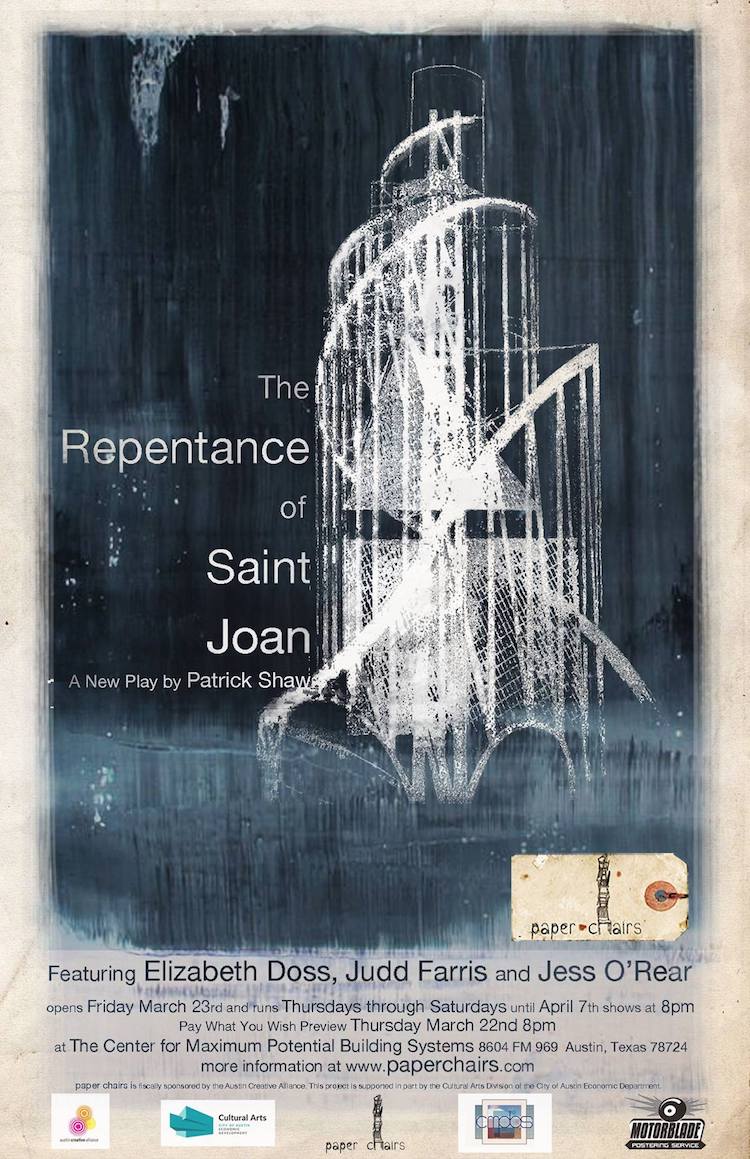