Review: Tomás and the Library Lady by Magik Theatre
by Kurt Gardner

Tomás & the Library Lady is the inspirational true story of Tomás Rivera, the son of migrant farm workers who grew up to become the first Mexican-American chancellor of a California university. The charming production now playing at San Antonio’s Magik Theatre deserves to be seen by the widest possible audience, as its message of inclusiveness is so important today.

Young Tomás travels with his parents, Josefa and Florencio, from Texas to Iowa so they can find work on a farm. Since Tomás has been uprooted from his familiar home, he can’t help but feel somewhat lost. He also suffers recurring nightmares about a former teacher who constantly hounded him to speak only English. 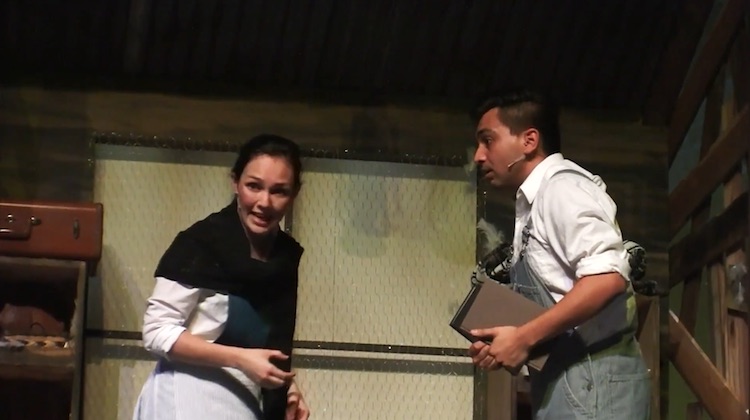 When Josefa sends the boy into town to post a letter, he happens to pass by the public library. As he tries to sound out the name of the building (“Carne-gie? Meat?”), he is approached by the library lady who kindly invites him inside. There, she shows him the stacks of books and explains the purpose of the library. Tomás is amazed that he can actually borrow books for free!

He rushes home with the first two volumes and tells his mother of the wonderful place he’d discovered. He swiftly becomes a voracious reader, and as time passes, the library lady helps him to improve his English, he in turn coaches her in Spanish.

Directed by Laura Garza, the Magik’s production is splendid. Ronald Watson’s scenic design is ingeniously minimal, supplemented by the amusing props created by Lucian Hernandez and Roy Moya’s atmospheric lighting. There are also several songs in the show, pleasantly performed by the cast under the supervision of music director Isabel de la Cerda. 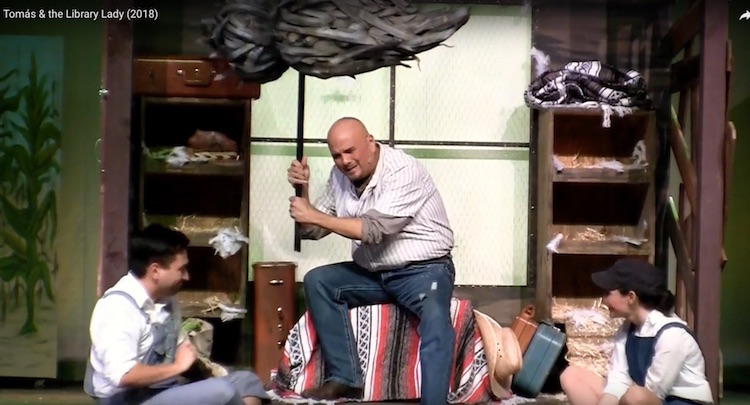 The actors are terrific. The show I saw had understudy Aiden Baldinger playing Tomás, and he inhabited the role with assurance. Michelle Bortoni is fine in dual roles as mother Josefa as well as Enrique, a friend of Tomás. Greg Hinojosa also resonates as father Florencio and the elder Papa Grande, the latter being indicated by an amusingly gargantuan white mustache held over his head. Corina Zars charms as the library lady and then makes a 180-degree turn to portray the scary teacher. Again, the teacher is indicated by a huge pair of batwing eyeglasses hovering over a smoke machine with an echo-chamber creepy voice.

Performed in both English and Spanish, Tomás & the Library Lady has something for everyone. It plays Saturdays and Sundays at 2:00 p.m. through Feb. 17 at the Magik Theatre, 420 South Alamo. Tickets can be obtained online or by calling (210) 227-2751.

Tomás and the Library Lady
by José Cruz González, based on the book by Pat Mora
Magik Theatre

Regular performance times are Saturday and Sunday at 2 p.m. For tickets, visit MagikTheatre.org or call the box office at 210-227-2751. Tickets are $13.50 for adults and children; senior, military and educator discounts are available. 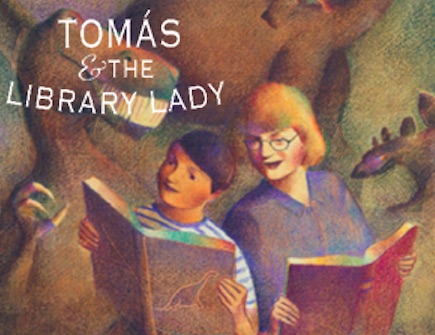