Winnie the Pooh
by Zach Theatre

Winnie-the-Pooh is Christopher Robin's fat little "bear of very little brain" who would like to drift peacefully through life, humming tunes and stopping frequently to eat "a little something." However, he finds himself involved in all sorts of frantic adventures, assisted by such friends as the dismal Eeyore, Piglet and Rabbit, with his countless relations. Pooh's intentions are always the best, but his passion for honey and condensed milk keeps getting him into trouble. When friend Piglet gets roped into Kanga's household and Kanga starts bathing him (with soap!) and forcing down spoonfuls of Strengthening Medicine, Pooh wants to fly to the rescue, but he's had so many snacks he gets stuck in the door. A.A. Milne's wit and special understanding of young people make this one of the most successful plays available. Bare stage w/props.

Based on the book by A.A. Milne. 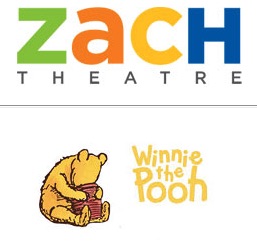