The Patriot is a one-person theater show written, performed & directed by Mike Maria with live music by composer/singer Yleana Wooten. The 60 minute long play takes the audience on an entertaining rollercoaster of fun, disturbing, sad & often unbelievable slices of the playwright's seemingly restless life – drawing outrageous parallels between personal issues and affairs of our nation. In a world separated by diversity, the show offers a soothing outlook to perhaps find the courage - after all the fighting's done - to embrace peace.

Austrian born American Mike Maria is a conservatory trained actor and director for film & theatre, acted in or directed 60 independent productions. In 1990 he moved from Austria to the USA, lived in Miami & New York. He created original work such as "I, Adolf Hitler", exploring the pitfalls of losing individual rights; "Anomie", a multi-media frenzy following a protagonist thru worlds of beauty & fear; "Son of Man", looking at love through the eyes of Jesus' 2nd coming.  Amongst others, Mike loved directing comedies like "Cafe Noir", "Tango Lesson" and the ever-charming "Little Prince".

In 2009, after a death in his family, Mike moved to Berlin, Germany, where he met his future wife. He acted in plays - directed, co-produced and starred in the feature film "Return of the Moonwalker"; he produced and acted in the documentary "Light.Man" which explores the possibility to live solely off light/prana. He wrote and directed "Ruth Berlau", a play depicting the life of the heroic key-player behind Bertolt Brecht.

In early 2016 Mike and his family decided to make New Braunfels their new home. In San Antonio Mike has been assisting, designing & performing theater with AtticRep (14 & Secrets of a Soccer Mom). Mike's original show „The Patriot“ is the third part of an original play trilogy, which has begun in Miami with „I, Adolf Hitler“ & „The Son of Man“, both commissioned by the Miami Light Project. Mike is proud to bring his original show „The Patriot“ to New Braunfels, the Christian Youth Theater & its Artistic Director Josh Scott and team.

Click to view feature by Robin Blackburn in the New Braunfels Herald-Zeitung, November 16, 2016 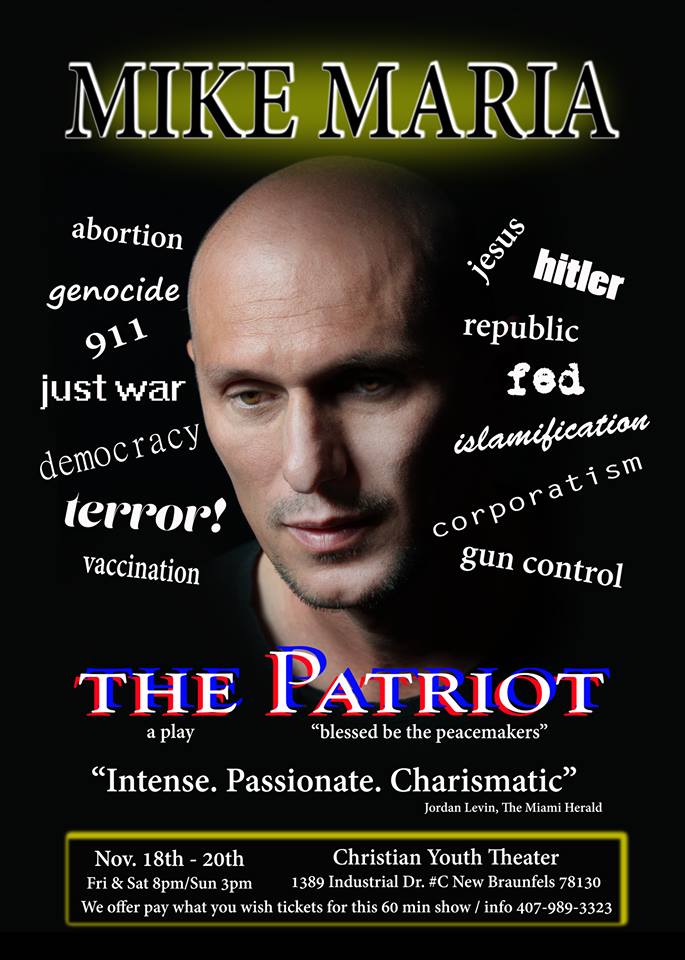 Christian Youth Theater (CYT) is an after-school theater arts training program for students ages 4 - 18. Since its founding in 1981 in San Diego, CYT has grown to be …