The Musical Adventures of Flat Stanley
by Georgetown Palace Theatre

Join everyone's favorite two-dimensional hero in a whirlwind musical adventure as Flat Stanley scours the globe for a solution to his unusual problem. He's stamped, posted and cancelled from Hollywood to France to Honolulu and beyond. And whether he's thwarting a robbery at the Louvre Museum in Paris, or 'hanging ten' off the coast of Hawaii, Stanley is closing in on his goal of being a three-dimensional boy once more!

Professional actors perform this toe-tapping musical for the young and young at heart!  All tickets $10!

The running time of the show is 55 minutes. 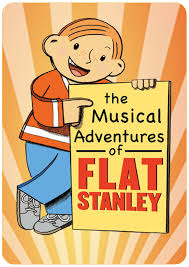