The Merchant of Venice
by Classic Theatre of San Antonio

The title character is the merchant Antonio, not the Jewish moneylender Shylock, who is the play's most prominent and most famous character. This is made explicit by the title page of the first quarto: The most excellent History of the Merchant of Venice. With the extreme cruelty of Shylock the Jew towards the said Merchant etc.

Bassanio, a young Venetian of noble rank, wishes to woo the beautiful and wealthy heiress Portia of Belmont. Having squandered his estate, he needs 3,000 ducats to subsidise his expenditures as a suitor. Bassanio approaches his friend Antonio, a wealthy merchant of Venice who has previously and repeatedly bailed him out. Antonio agrees, but since he is cash-poor – his ships and merchandise are busy at sea – he promises to cover a bond if Bassanio can find a lender, so Bassanio turns to the Jewish moneylender Shylock and names Antonio as the loan's guarantor.

February 13 - March 1, 2015, Fridays and Saturdays at 8 p.m., Sundays at 3 p.m., at the Classic Theatre, San Antonio, housed in the storefront studio at the Woodlawn Theatre, 1921 Fredericksburg Rd., San Antonio 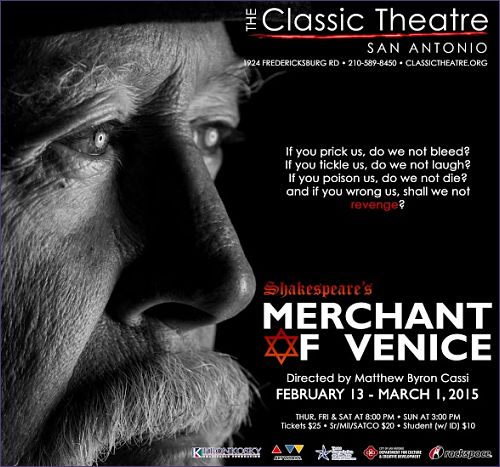 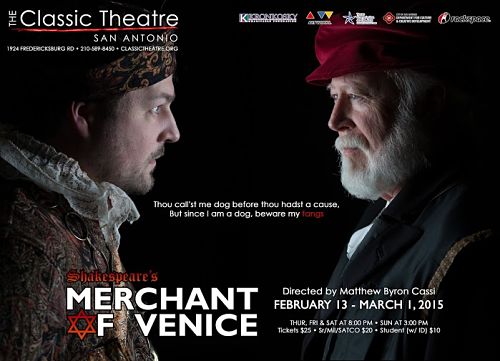