The Importance of Being Earnest
by Mary Moody Northen Theatre

Two young gentlemen living in 1890's England have taken to bending the truth in order to put some excitement into their lives. Jack Worthing has invented a brother, Earnest, whom he uses as an excuse to leave his dull country life behind to visit the ravishing Gwendolyn. Algy Montcrieff decided to take the name 'Earnest' when visiting Worthing's young and beautiful ward, Cecily at the country manor. Things start to go awry when they end up together in country and their deceptions are discovered - threatening to spoil their romantic pursuits.

- Written by Scorpiessa at the Internet Movie Database 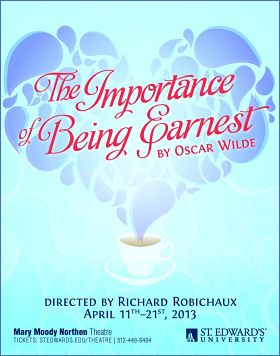