Lovingly ripped off from the classic film comedy MONTY PYTHON AND THE HOLY GRAIL, the story retells the legend of King Arthur and his Knights of the Round Table, and features a bevy of beautiful show girls, not to mention cows, killer rabbits, and French people. Did we mention the bevy of beautiful show girls? The winner of 3 Tony Awards, including “Best Musical,” and received 14 Tony Award nominations.

For five weekend, you can experience this extremely popular, highly irreverent and hilarious parody of the Legend of King Arthur, affectionately purloined from the classic film comedy Monty Python and the Holy Grail (1975).  The story retells the legend of King Arthur and his Knights of the Round Table, featuring a bevy of beautiful show girls, not to mention cows, killer rabbits, and French people.  "Why SPAMALOT?  Because nothing else rhymes with Camelot, of course!"  (This from an innocent bystander…)

The original 2005 Broadway production of SPAMALOT, directed by Mike Nichols, won three Tony Awards, including the Tony Award for Best Musical of the 2004–2005 season, and received 14 Tony Award nominations.  Eric Idle wrote the book and lyrics, and John Du Prez and Eric Idle collaborated on the music.  A further explanation of the title for SPAMALOT is attributed to Eric Idle:  “It comes from a line in the movie which goes: We eat ham, and jam, and Spam a lot.”

With great enthusiasm, talent, and experience in this arena, Ron Watson directs the Palace’s production of SPAMALOT; Jesee Smart provides her brilliant choreography skills; the multi-talented Austin Kimble serves as music director, conductor, and keyboardist; and Jessie Drollette, in her ninth season with the Palace, does the tough job as stage manager. 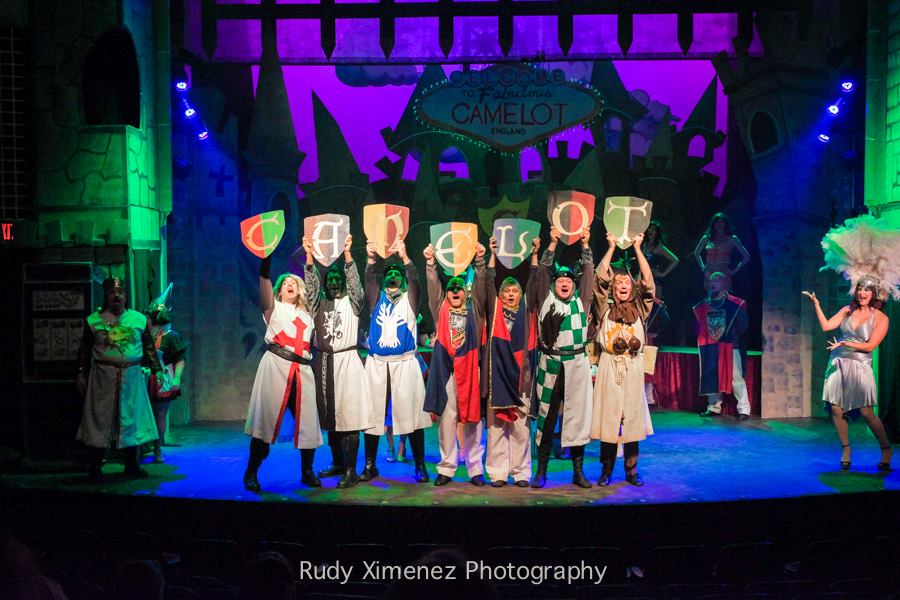 *All individual ticket prices include a $1.00 Historic Preservation Fee.

The Palace seats about 295, with reserved seating paid for in the ticket price.  The Palace office in the lobby of the theatre is open Monday through Friday from 10:00 a.m. until 4:00 p.m. (except for some holiday dates).  Purchase tickets and select seating on-line at www.georgetownpalace.com or by calling 512-869-7469.  (Please call ahead regarding special needs seating.)  Visa, Master Card, Discover, and American Express are accepted.