The stage at Georgetown’s Historic Palace Theatre has been transformed into a café: Smokey Joe's Café, to be precise, where The Songs of Leiber and Stoller will be rockin’ and rollin’ on weekends from July 15 to August 14.  It is said that Jerry Leiber and Mike Stoller, American songwriting and record producing partners, virtually invented rock 'n' roll, and now their songs provide the basis for this electrifying show that illuminates a golden age of American culture.  Smokey Joe's Café, The Songs of Leiber and Stoller features Kansas City, Fools Fall in Love, On Broadway, Yakety Yak, I’m a Woman, Love Potion #9, Jailhouse Rock, Stand by Me, and many more.  Leiber and Stoller won a Grammy award for Is That All There Is? in 1969 and a Grammy for the cast album of Smokey Joe's Cafe on Broadway in 1995, where it was also nominated for seven Tony awards and became the longest-running musical revue in Broadway history. 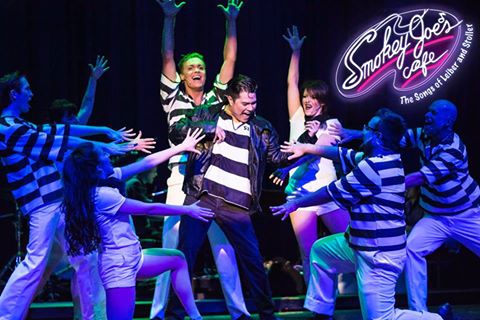 Lannie Hilboldt, currently the Director of Music for the Palace Theatre, admirably fills the role of Director for Smokey Joe's Cafe.  Lannie has been a professional musician for more than 40 years, has toured Asia and the United States, performed with the Duke Ellington Orchestra, and performed twice in command performances at the White House.  Lannie also spent 20 years as the house bassist for the Zach Theater in Austin.  Austin Kimball also wears many hats for Smokey Joe's Cafe:  Music Director, Conductor, and Pianist.  He is an Austin-based performer, educator, composer, and arranger whose career has spanned the worlds of jazz, classical, and musical theatre.  He is the 2015 recipient of the Broadway World Austin Award for "Best Musical Direction." Vincent Sandoval, as Choreographer, has pursued a professional dance career in New York City with performing credits for Radio City Christmas Spectacular, Radio City Easter Show, Radio City Spring Spectacular (Featured Dancer), and many European and American tours.  At the Palace, he has also provided his talented choreographic direction for CATS, SHREK, and (among others) The Full Monty.

A special thank-you to The Round Rock Express, affiliate of the Major League Texas Rangers baseball team, for their sponsorship of the Palace production of Smokey Joe's Cafe:.  And another thank-you to our non-profit partner..... The Caring Place!  Since 1985, The Caring Place has been providing basic human needs for families in financial crisis in Georgetown and Northern Williamson County.

Smokey Joe’s Café, with a suggested rating for General Audiences, runs 5 weekends from July 15 to August 14, 2016.  Friday and Saturday shows are at 7:30 p.m.; Sunday shows are at 2:00 p.m.  See our Website for actual dates and seating availability.

Ticket prices for the 2015-2016 Season are $28* General Admission, $26* Seniors (55+), $15* Students (10-22) and Active Military, and $11* Children (9 & younger).  *All individual ticket prices include a $1 Historic Preservation Fee.  (Season Tickets do not assess the Historic Preservation Fee.)  Group rates are available for 20 or more.  The Palace seats about 295, with reserved seating paid for in the ticket price.  The Palace office in the lobby of the theatre is open Monday through Friday from 10:00 a.m. until 4:00 p.m. (except for some holiday dates).  Purchase tickets and select seating online at www.georgetownpalace.com or by calling 512-869-7469.  (Please call ahead regarding special needs seating.)  Visa, Master Card, Discover, and American Express are accepted. 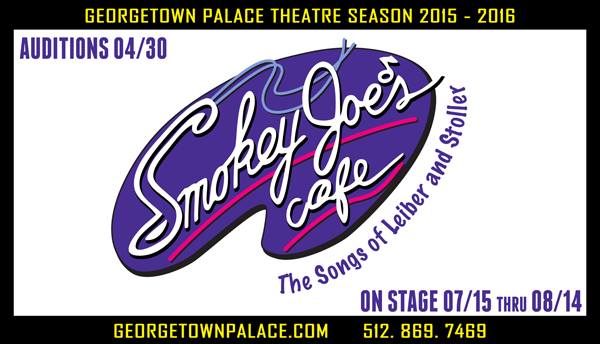