Georgetown's Historic Palace Theatrebrings SHREK THE MUSICAL to life onstage just in time for the Holiday Season, with a run of 27 scheduled performances from November 21st to December 29th! The hilarious story of everyone’s favorite ogre is based on the 2001 Oscar®-winning DreamWorks film and William Steig's 1990 book SHREK!; the stage version has music by Jeanine Tesori and Book/Lyrics by David Lindsay-Abaire and is directed by Clifford Butler for the Palace.

Featuring fabulous, colorful costumes, a terrific score of songs, big laughs, and great dancing, the story of SHREK goes something like this: In a faraway kingdom turned upside down, things get ugly when an unseemly ogre – not a handsome prince – shows up to rescue a feisty princess. Throw in a donkey who won’t shut up, a bad guy with a SHORT temper, and over a dozen other fairy tale misfits, and you’ve got the kind of mess that calls for a real hero. Luckily, there’s one on hand… and his name is SHREK!

Director Clifford Butler has been a major player at the Palace Theatre since early 2002.  His talents include not only directing, but also writing, acting, singing, and musical direction.  His previous Palace directing credits include CATS (twice), A Christmas Carol, EVITA, and A Little Night Music.  Onstage credits include Will Rogers in The Will Rogers Follies, Seymour in Little Shop of Horrors, and Judas in Jesus Christ Superstar.  Clifford has also performed and directed many times for Sam Bass Community Theater.

In the role of SHREK, Scott Shipmanwill steal your heart – again!  He did so as Captain Hook in Peter Pan and as Trevor Graydon in Thoroughly Modern Millie, both at the Palace.  Scott has worked with Zach Theater, Austin Lyric Opera, Austin Shakespeare, Zilker Theater Productions, Arts on Real, St. Edward's University, and other Austin venues.  A nominee for multiple B. Iden Payne and Austin Critics Table awards, Scott Shipman has worked with the Shakespeare Institute and the Royal Shakespeare Company in Stratford-Upon-Avon, England, as well.

Vincent Sandoval is the man behind the outstanding choreography in SHREK – following much distinguished education, a professional career in New York City, both national and European tours, SummerStock Austin, B. Iden Payne, Austin Critic’s Table, and BroadwayWorld Nominee for Outstanding Choreography.  Vincent is faculty at both Round Rock Repertory Dance Center and Zach Scott Theatre School.  At the Palace, he has also provided his talented choreographic direction for CATS and The Full Monty.

Music Director Austin Kimble holds a Bachelor of Music degree in jazz piano performance from the University of Texas at Austin.  With many musical direction jobs to his credit, he began working for the Palace in 2012 as an accompanist for rehearsals and auditions.  SHREK THE MUSICAL is his first production as Music Director for the Palace.  Kimble currently performs with many different bands in Central Texas and teaches music at St. Stephen’s Episcopal School in Austin.

Oh, and those exciting puppets and other props – and all the prosthetics and makeup?  Credit for those goes to the talented Tamar Madrigal who is working on her fourth season at the Palace.  Scenic Artist Barb Jernigan brings her A-game to the set – and what an A-game it is!  Assisted by Sue Williams, Barb takes the imaginative and sturdy work done by the Palace Set Builders and makes magic! 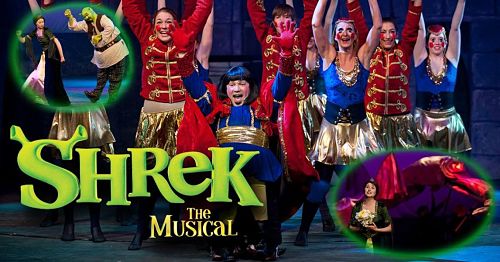