Based on the Oscar-winning DreamWorks film that started it all, 'Shrek: The Musical' brings the hilarious story of everyone's favorite ogre to dazzling new life on the stage. In a faraway kingdom turned upside down, things get ugly when an unseemly ogre -- not a handsome prince -- shows up to rescue a feisty princess. Throw in a donkey who won't shut up, a bad guy with a short temper, a cookie with an attitude, and over a dozen other fairy tale misfits, and you've got the kind of mess that calls for a real hero. Luckily, there's one on hand -- a big, green, lovable one named Shrek! Let your freak-flag fly with this wonderfully zany musical for the whole family. Full of all-new songs, great dancing and breathtaking scenery, 'Shrek: The Musical' is part romance, part twisted fairy tale and all parts fun!"

Fridays-Sundays,
June 03 - July 03, 2016
Emily Ann Theatre
1101 Ranch Road 2325
Wimberley, TX, 78676
Performed on the outdoor Patti S. Harrison Main Stage.
Tickets: Adults $15, Students $10, Groups of 10 or more $12 and Children under 5 free.  To purchase tickets, click here.
Join us for dinner before the show!  Barbecue plates will be a new feature at the concession stand this year in addition to hot dogs, popcorn and drinks.  Gate and concessions open at 7:00 p.m. 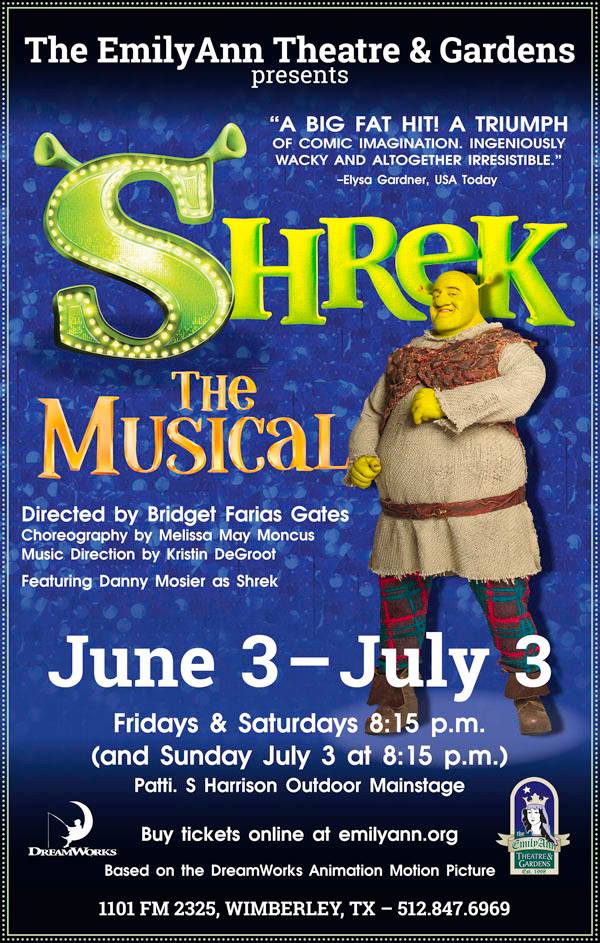