What would the world be like if Selena had lived? ¡Imagínate!

That's the question in "Pulga Time Machine,"a new sketch comedy show from Austin's Mexcentrics troupe. Both a clever remix and a comically creative  expansion of last year's sold out "Pulga Nation" show, this new production brings together award-winning alumni from Teatro Vivo and the Latino Comedy Project for a night of Tex-Mex laughs.

Definitely NOT for the whole family. Recommended for mature audiences, ages 18 and up.

Sketch writers for this production include Omar Gallaga, Raul Garza and Karinna Perez. 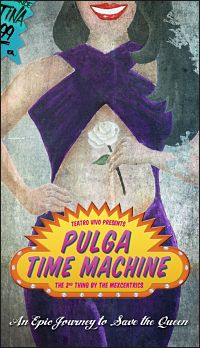