Two teenaged Latina cousins, Araceli and Julie, have come to the US at different points in their young lives. Both girls work through the struggles of living on the hyphen known by many Mexican Americans, including their language, traditions, nationality, and identity. The play asks various questions including the following: What does having a quinceañera mean to Mexican American girls given varied connections to their roots? How can anyone retrace their roots and remember and re-establish who they are? How might these primas influence one another to live on the hyphen with more courage, consciousness and grace?

A Theatre for Youth piece directed by Oscar Franco

Playwright: Roxanne Schroeder-Arce is a scholar, artist and pedagogue. She has taught theatre education in the Department of Theatre & Dance at the University of Texas at Austin since 2010, and before that she taught at Emerson College and Fresno State. Roxanne’s research interests include culturally responsive theatre education and Latino/a theatre for and with youth. She has published articles in journals such as Youth Theatre Journal, International Journal for Education and the Arts, Theatre Topics and Gestos. Roxanne’s bilingual plays Señora Tortuga, Legend of the Poinsettia, Sangre de un Ángel and Mariachi Girl are published by Dramatic Publishing and have been produced by various theatres and schools throughout the U.S. Roxanne also taught high school in Texas for several years and served as Artistic Director of Teatro Humanidad in Austin. As well as her playwriting, she is also a director and performer.

Teatro Vivo presents the sixth annual Austin Latino New Play Festival (ALNPF) in collaboration with ScriptWorks February 25-27 at the Emma S. Barrientos Mexican American Cultural Center. The festival includes three evenings and one afternoon of staged readings of new Latino plays. General admission tickets for the festival are a donation-based or “pay what you wish.” A $40 reserved seat festival pass is available for those attending all three days or reserved seats may be purchased for $15 for each play. Furthermore, Teatro Vivo is offering a limited number of complimentary “social media” seats at the back of the theatre for those interested in live tweeting and posting to social media during the festival. Visit teatrovivo.org for information.

ALNPF is a theatre event that brings playwrights and audience members together in conversation surrounding new workshop productions that bring insight into the Latino experience. After each reading, the playwright participates in a talkback sessions with the audience. New this year is the addition of two theatre for youth pieces to be shown the evening of Thursday Feb 25 and the afternoon of Saturday February 27, 2016. The productions have Latino roots and explore cross-cultural themes and modern dilemmas that surprise, challenge, engage, and push the dramatic envelope for audience members accustomed to one-way conversations at the theater. 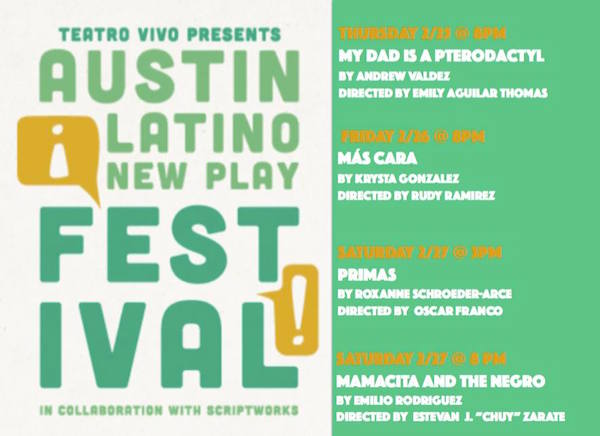