As a general rule. Closer to law.
The first commandment in our town reads:
Poor Boys don’t talk to Rich Girls.

Summer in a small town. Beautiful Annabel strikes up a tentative friendship with Steeds, a poor orphan. A carnival sweeps through, featuring the mysterious illusionist, Bill the Magnificent. Plans are hatched, promises are broken, and innocent mistakes produce tragic consequences. Poor Boys’ Chorus uses rhythm, light and magic to tell a story that is poignant, timeless and uniquely theatrical.

Brian Kettler is a third-year M.F.A. candidate in Playwriting at UT-Austin. He is a graduate of Kenyon College and the National Theater Institute. He was the recipient of the 2012 Oregon Literary Fellowship in Drama. His full-length plays include School Suspension, Personal and Poor Boys’ Chorus.His short play, Clown Room, was featured in the 2014 Theater Masters National M.F.A. Playwrights Festival, with production in Aspen and New York City.

Natalie Novacek tells raw and daring stories with effortless staging through contemporary, language-driven scripts. She is the artistic director of Loudmouth Collective, known in her hometown of Minneapolis, MN for tackling challenging solo performance and engaging small-ensemble theatrical events. Natalie was a Kennedy Center American College Theater Festival National Selection Team Directing Fellow. She is an associate member of the Stage Directors and Choreographers Society.

Admission is free. Seating is limited. 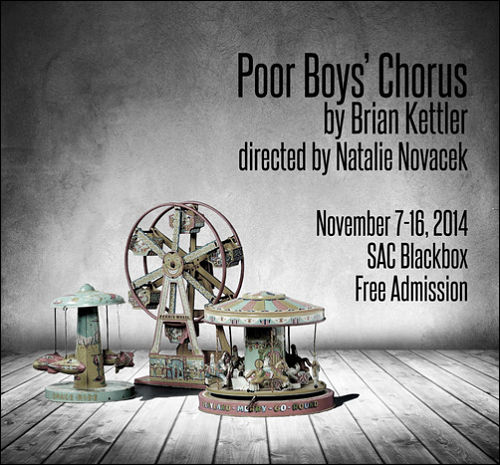