Is it too late for love? Persuasion is a Cinderella story about a fairy tale gone wrong and Anne Elliot's fight to earn her happy ending. Jane Austen's final novel soars to life in this ravishing new musical about love, longing and second chances.

Hot off the stages of Seattle's Fifth Avenue Theatre New Musical Festival, Persuasion tells the harrowing tale of Anne Elliot, who was persuaded to break off her engagement to a penniless naval officer who had only himself to recommend him. When Captain Wentworth returns from the Napoleonic Wars a rich and eligible bachelor, he can't forgive Anne for doubting and deserting him and is determined to marry anyone else.

Harold Taw is a novelist, playwright, and screenwriter. His debut novel was Adventures of the Karaoke King (Lake Union Publishing 2011). His writing has been featured on NPR, in a New York Times bestselling anthology and in The Seattle Times; his screenplay Dog Park has garnered recognition in domestic and international film festivals and competitions. Taw wrote the book for two musicals commissioned and presented as staged readings by The 5th Avenue Theatre: the full-length Persuasion (2015), based on Jane Austen’s final novel and the original one-act The Missed Connections Club (2014), which won Third Place in the 2015 Frostburg State University One-Act Competition, was a finalist in the Arts Club of Washington’s 2014 One-Act Play Competition and was long-listed for the 2015 British Theatre Challenge. Taw is currently completing a novel about a turbulent adolescence in Southeast Asia and co-curating WordsWest Literary Series. A Yale Law School graduate and a Fulbright Scholar, Taw's research and writing have been supported by, among others, 826 Seattle, Artist Trust, Centrum, the Helen Riaboff Whiteley Center, Humanities Washington, Jack Straw Productions and Wing Luke Museum.

Chris Jeffries has written book, music and lyrics for Vera Wilde and Moon of My Delight (Empty Space Theatre); Kaleidoscope Eyes (Northwest Film Forum); The Glory Booty Club (Garland Award); I See London, I See France ; Radio Pirates and The Fatty Arbuckle Spook House Revue (Annex Theatre, Footlight Award). The Fatty Arbuckle Spook House Review was later produced at Yale School of Drama. Vera Wilde  has been produced throughout the U.S. and abroad, most recently in Berkeley (four SFBATCC awards). Music/lyrics credits include Laura Comstock's Bag-Punching Dog (Los Angeles, Ovation and LA Weekly Awards, Best Musical) and Horse Opera (Seattle, Minneapolis, Washington; NEA Consortium Grant). His music for Bunnicula (Kennedy Center/Seattle Children’s Theatre) has been heard in dozens of productions in the U.S. and Canada. He is currently under commission by A Contemporary Theatre (ACT) for a musical based on Jack Kerouac’s Maggie Cassidy. Chris received The Stranger's first “Genius” Award in Theatre and was twice a finalist for CalArts’ Alpert Award in the Arts. A graduate of Yale University, he lives in Seattle, Washington.

Admission is free.
Reserve seats in advance by emailing persuasionaustin@gmail.com
**Please indicate the name of party and the number attending.
Available seats will be released to walk-up patrons five minutes prior to curtain. 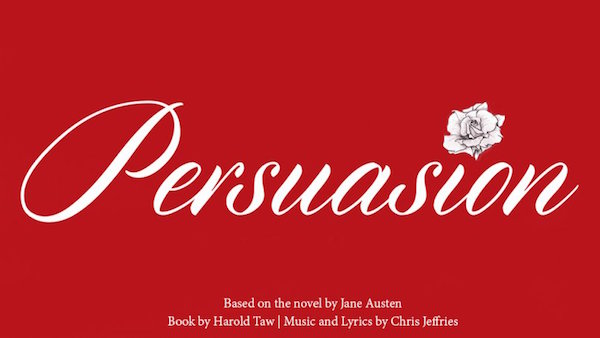