Our Town
by University of Texas Theatre & Dance

Wikipedia: Our Town is a 1938 three-act play by American playwright Thornton Wilder. It tells the story of the fictional American small town of Grover's Corners between 1901 and 1913 through the everyday lives of its citizens.

Throughout Wilder uses metatheatrical devices setting the play in the actual theatre where it is being performed. The main character is the stage manager of the theatre who directly addresses the audience, brings in guests lecturers, fields questions from the audience, and fills in playing some of the roles. The play is performed without a set and the actors mime their actions without the use of props.

The Stage Manager introduces the audience to the small town of Grover's Corners, New Hampshire, and the people living there as a morning begins in the year 1901. Joe Crowell delivers the paper to Doc Gibbs, Howie Newsome delivers the milk, and the Webb and Gibbs households send their children off to school on this beautifully simple morning.

Three years pass and George and Emily prepare to wed. The day is filled with stress. Howie Newsome is delivering milk in the pouring rain while Si Crowell, younger brother of Joe, laments how George's baseball talents will be squandered. George pays an awkward visit with his soon-to-be in-laws. Here, the Stage Manager interrupts the scene and takes the audience back a year, to the end of Emily and George's junior year. Emily confronts George about his pride, and over an ice cream soda, they discuss the future and their love for each other. George resolves not to go to college, as he had planned, but to work and eventually take over his uncle's farm. The wedding follows where George, in a fit of nervousness, tells his mother that he is not ready to marry, and Emily tells her father she is not ready to marry either, but they both calm down and accept their proposals happily.

The Stage Manager opens the act with a lengthy monologue emphasizing eternity, and introduces us to the cemetery outside of town and the characters who died in the nine years since Act Two: Mrs Gibbs (pneumonia, while traveling), Wally Webb (burst appendix, while camping), Mrs. Soames, and Simon Stimson (suicide by hanging), among others. We meet the undertaker, Joe Stoddard, and a young man named Sam Craig who has returned home for his cousin's funeral. We learn that his cousin is Emily, who died giving birth to her and George's second child. The funeral ends and Emily emerges to join the dead. Then Mrs. Gibbs tells her that they must wait and forget the life that came before, but Emily refuses. Despite the warnings of Simon, Mrs. Soames, and Mrs. Gibbs, Emily decides to return to Earth to relive just one day, her 12th birthday. She finally finds it too painful, and realizes just how much life should be valued, "every, every minute." Poignantly, she asks the Stage Manager whether anyone realizes life while they live it, and is told, "No. The saints and poets, maybe – they do some." She then returns to her grave, beside Mrs. Gibbs, watching impassively as George kneels weeping at her graveside. The Stage Manager concludes the play, and wishes the audience a good night.

Our Town
by Thornton Wilder
University of Texas Theatre & Dance 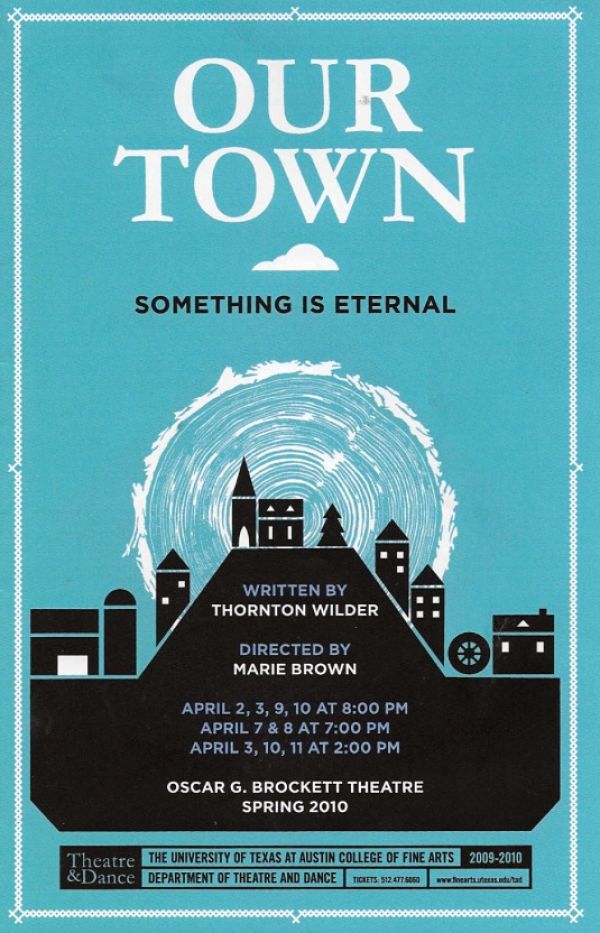