Moon Over Buffalo, another of Ken Ludwig’s comedic masterpieces,plays at the Historic Palace Theatre in Georgetown from April 11 to May 4.  This popular stage comedy brought a lot of laughs to Palace audiences when first performed as part of our 2006 Season.  For our All-Star Season 2013-2014, Moon Over Buffalo, directed by Artistic Director Mary Ellen Butler, returns in the spirit in which it was intended:  to bring down the house with laughter!

To sum up the plot for Moon Over Buffalo is next to impossible!  What it is NOT:  It is not about an animal roaming the prairie.  What it is:  It IS about a rather crazy series of events in a repertory theatre in Buffalo, NY.  Traveling actors George and Charlotte Hay are performing Cyrano de Bergerac and Private Lives when George receives a phone call from Frank Capra, THE famous film director, who says that he needs replacements for Ronald Coleman and Greer Garson, the two stars of his current film, and that he plans to see one of George's shows and consider George and Charlotte for the parts.  While Charlotte has grandiose dreams of becoming a Hollywood film star, George is quite satisfied as a stage actor, and sees live theater as being superior to film.  From here, complications and duplicity abound!

Following separations and reunions, Charlotte and daughter Roz try to get George prepared for the afternoon's showing of Private Lives, which Capra intends to see.  George, in a drunken stupor, decides he would rather do Cyrano, and dresses appropriately. The resulting show is a disaster, as George is several minutes late to arrive onstage and in the wrong costume and character.  Hilarious pandemonium ensues!

The Palace’s 2013-2014 All-Star Season has two very generous sponsors:  HEB and the Texas Commission on the Arts.  Additionally, the Palace production of Moon Over Buffalo is sponsored by Vitalogy Skincare, and the Palace’s non-profit partner for this production is the Ride on Center for Kids (R.O.C.K.). 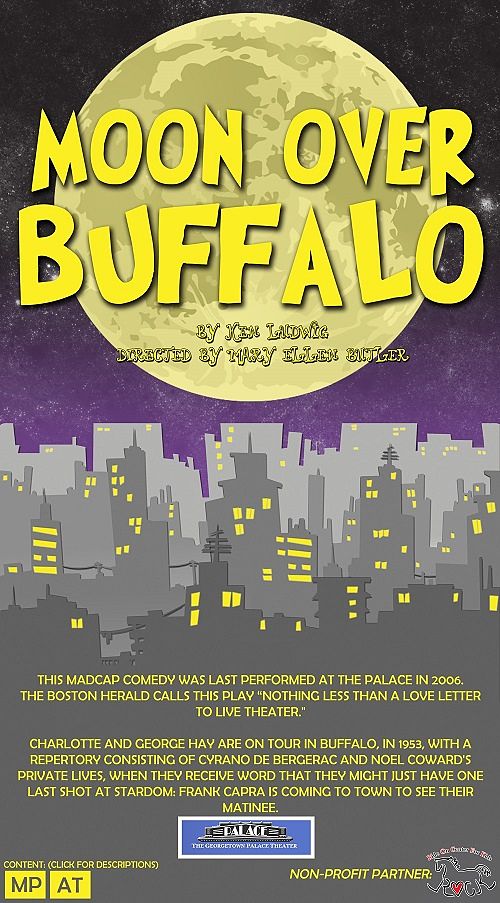