Junie B. Jones, the musical
by Georgetown Palace Theatre

Junie B. Jones, the Musical, is based on the Book Series by Barbara Park, with Book and Lyrics by Marcy Heisler and Music by Zina Goldrich. The production features a tremendously loveable character and fun-filled songs in a delightful adaptation of four of Barbara Park's best-selling books brought to life in a genuinely comical manner through professional actors.

It's Junie B.'s first day of first grade and a lot of things have changed for her: Junie's friend Lucille doesn't want to be her best pal anymore, and on the bus, Junie B. makes friends with Herb, the new kid at school. Also, Junie has trouble reading the blackboard and her teacher Mr. Scary thinks she may need glasses. Throw in a friendly cafeteria lady, a kickball tournament, and a "Top-Secret Personal Beeswax Journal," and first grade has never been more exciting.

Junie B. Jones will capture your hearts just as the books captivated an entire generation of students. Created by Marcy Heisler and Zina Goldrich. Awaken a young person's desire to read with the sassy little diva Junie B. Jones and her adventures in first grade.

Junie B. Jones, the musical
by Marcy Heisler, Aina Goldrich, based on the books by Barbara Park
Georgetown Palace Theatre

That’s only two Saturdays: October 18th and 25th, at 10:00 a.m. All tickets $10.  Reserve early online www.georgetownpalace.com for the best seats!  Tickets may also be purchased by phone at 512-869-7469 or at the door per availability. This not-for-kids-only musical is professionally developed by TheatreworksUSA and runs one hour in length on stage. 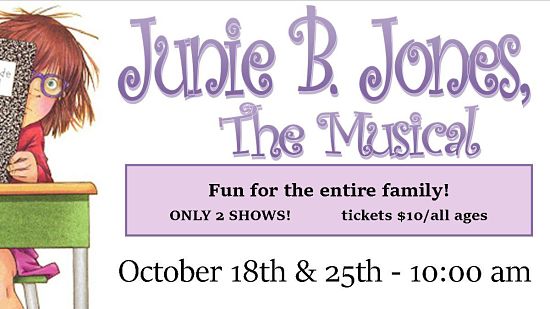