Blood Wedding (Spanish: Bodas de sangre) is a tragedy by Spanish dramatist Federico García Lorca. It was written in 1932 and first performed in Madrid in March 1933 and later that year in Buenos Aires. Theatre critics often group it with Yerma and The House of Bernarda Alba as the "Rural Trilogy".

The theme of choice is evident through the characters of Leonardo, the bride, and the bridegroom. The bride is very conflicted because she forces herself to marry the bridegroom, when in reality she is still in love with Leonardo. Leonardo, despite being married, is also still madly in love with the bride. Their combined choice to run away with each other after the marriage is one that manifests their latent and pent up desires left over from their previous relationship. The bridegroom is in love with his bride-to-be, however. Despite the fact that she lives in a cave located hours away, the bridegroom still loves the bride and takes her as the woman he wants to remain with for the remainder of his life.

The theme of deception ties into the theme of choice. The bride is deceitful and deceptive by masking her residual yearnings for Leonardo with a marriage to another man. This choice is dishonest because deep down the bride knows how she feels, and the only reason she even attempts to marry the bridegroom is because she is manipulating him in order to distract herself from her ‘troubling’ desires for Leonardo.

The theme of fate also ties into the themes of choice and deception. The choice on the bride’s part to marry the bridegroom, despite the fact that she still retains feelings for her ex, causes the outcome of the deaths of both men in the end of the play. There is a certain degree of irony in action because what are the chances that a woman would try to choose both men and yet lose both instead of winning one? Fate plays a very important role in the drama of Blood Wedding with its surprising twists and turns in the plot, and the final result as well.

Finally, the theme of nature is present in Blood Wedding: the moon, the trees, the river, death (in the form of the beggar woman), the vineyard, orange blossoms, etc. These references to nature suggest that there is something in human nature that is unavoidable. Perhaps Leonardo is unable to follow social norms (by leaving his wife and running off with the Bride) because his nature will not allow him to do otherwise. In this and other examples, a Freudian reading of the text becomes available as Lorca seems to be exploring the true nature of man. 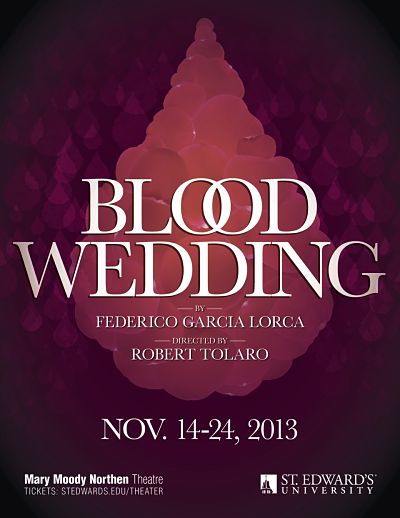