Best of Fest - Bill B
by FronteraFest

Bill B. Tonight we present five shows selected from among the 2016 Saturday "Best of Week" performances: four chosen by our panel and the fifth by audience vote. This same bill of shows is also playing on Saturday, February 13.

Cunctipotence, by Gloria Adams, Danielle Bellone, Teresa Johnson
"Cunctipotent": from the Latin cunctus, "all," and potens, "powerful." All-powerful deriving from a female source, or in other words . . . cunt magic. Three badass Austin women use poetry, storytelling, and spoken word to explore their own magic and raise their voices in praise of cunctipotence.

Beautiful Thangs Come From Trailer Parks, Y'all, by Jack Darling (The Darlings). Jack Darling picks up the pieces after a violent attack, journeying through the darkness and back with a little help from a thing called *magic*.

The Old Maid and Her Old Goose. An old maid is charged with instructing her young niece about the art of love on the eve of a Fancy Ball. When a rapacious libertine commandeers the lesson, a contest is born to determine whose approach to love is most potent. A new play by Kyle John Schmidt, directed by Elizabeth C. Lay.

Co*Star: The Record Acting Game with Vincent Price, conceptualized by Lee Eddy. YOU act scenes opposite your favorite actor. Directions: 1) Remove script from LP envelope. 2) Turn to any scene you want to play. 3) Place the phonograph needle on the corresponding scene that is on the record. 4) Listen carefully as the narrator sets the scene and the star on this record acts out his part and gives you your cue. 5) When your cue is given, read your lines at the proper pace so that the flow of the scene is natural and realistic. 6) Follow the script but you may add, change or improvise your lines as you wish. REMEMBER! Practice makes perfect.

Breaking It Down: A Guide, created by The Back Pack: Katie Kohler, Justin Morley, Jeremiah Rosenberger, and Pete Betcher (The Back Pack). A whimsical piece using movement, music, and a sprinkle of magic. The fourth entry into FronteraFest for the group and the newest work in a long line of short, fast-paced pieces.
Performances at Hyde Park Theatre. Map

Wednesday, Saturday,
February 10 - February 13, 2016
Hyde Park Theatre
511 West 43rd Street
Austin, TX, 78751
Now in its 23rd year, FronteraFest is five weeks of new, alternative, offbeat, and just plain off-the-wall unjuried fringe theatre. Too bad there's no actual way to expect the unexpected, because that is your only hope. Produced by Hyde Park Theatre in collaboration with ScriptWorks.
Short one (I'm speaking relatively, people) this week: we're at the final week, the Best of the Festival. And that means, besides ourclosing night party (please come!), we have three separate billsfor you this week:
Bill A plays Tuesday and Friday, and includes two eggs, two fathers, three horrible things, three extraordinary spoken-word artists, and four hilarious improvisers.
Bill B plays Wednesday and Saturday, and includes badass women, trailer park magic, a rollicking fairy tale, the transformative power of Vincent Price, and a madcap, high-energy closer.
Wild Card night--staff-selected from shows overlooked by judges earlier in the festival--plays Thursday night only. You can see a woman wondering why you're saying that, an Englishwomantrapped in Tripoli, entanglement in the Tinder era, an all-black male improv troupe--and perhaps the most meta FronteraFest piece of all time, "a series of very short plays for life-size people."
If your night is sold out, come on down to the theater at 7pm and get on the waiting list--we get in at least some folks from that list just about every night.
And hey! Please come to the closing weekend party after the show on Saturday, February 13 at Dane's Body Shop next to Hyde Park Theatre. We'll have drinks on hand and New World Deli and The Parlor will feed you up right. 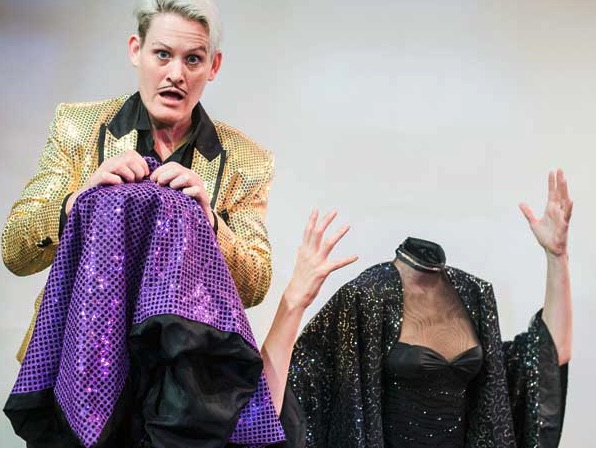