As You Like It
by University of Texas Theatre & Dance

Shakespeare’s famous pastoral comedy, written in the late 1500s/early 1600s, is the story of Rosalind, daughter of Duke Ferdinand, who has been forced into exile by the usurping Duke Frederick. When Rosalind is banished from the court, she, in the company of her cousin Celia and Touchstone the fool, travel into the forest in search of her father. Taking the disguise of a boy, Rosalind wanders into a gauntlet of heartsick lovers, bizarre encounters and passionate longing in this hilarious examination of the human condition.

Admission is free; seating is limited 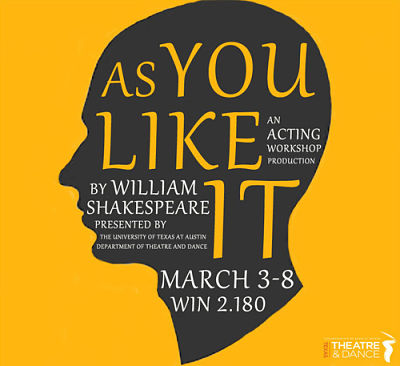