Anything Goes
by Georgetown Palace Theatre

It's the age-old tale of boy-meets-girl, boy-loses-girl, boy-gets-mistaken-for-a-famous-gangster, set aboard the S.S. American cruise ship. It's an evening of high notes, high stepping and hijinks on the high seas with this classic of musical comedy. Enjoy such Cole Porter Classics as I Get A Kick Out of You, It's de-Lovely, You're The Top, and Anything Goes!

Cole Porter originated the music and lyrics for ANYTHING GOES, providing such unforgettable songs as “Anything Goes,” “You’re the Top,” and “I Get a Kick Out of You.”  The original book for the show was a collaborative effort by Guy Bolton and P.G. Wodehouse, heavily revised by the team of Howard Lindsay and Russel Crouse.  Since its 1934 debut at the Alvin Theatre (now known as the Neil Simon Theatre) on Broadway, the musical has been revived several times in the United States and Britain and has been filmed twice.  The story is told through madcap antics aboard an ocean liner bound from New York to London.  Billy Crocker is a stowaway in love with heiress Hope Harcourt, who is engaged to Lord Evelyn Oakleigh.  Nightclub singer Reno Sweeney and Public Enemy #13 Moonface Martin aid Billy in his quest to win Hope.

Scott Shipman makes his Palace directing debut at the helm of ANYTHING GOES, and his acting credits include several outstanding roles for the Palace – roles that have endeared him to Palace audiences:  as Captain Hook in Peter Pan, as Trevor Graydon in Thoroughly Modern Millie, and most recently as Shrek in SHREK, The Musical.  Scott has worked with Zach Theater, Austin Lyric Opera, Austin Shakespeare, Zilker Theater Productions, Arts on Real, St. Edward's University, and other Austin venues.  A nominee for multiple B. Iden Payne and Austin Critics Table awards, Scott Shipman has also done notable work with the Shakespeare Institute and the Royal Shakespeare Company in Stratford-Upon-Avon, England.

Judy Thompson-Price is also making her debut at the Palace as Choreographer for ANYTHING GOES, but she has choreographed in Austin and Georgetown for more than thirty years.  Recent work includes Gypsy at Southwestern University and How to Succeed in Business... for Archangel Theater. She choreographed twenty-one of the Zilker Hillside Theater musicals, and has received numerous ACOT Awards.  She currently teaches dance at SU.

Michelle Haché, now a Palace veteran, is Music Director for ANYTHING GOES.  She moved to Austin after completing her Graduate Diploma at the Juilliard School in New York. Since arriving in Austin, she has been nominated for the B. Iden Payne four times, winning in 2010 and 2013, for roles such as Maria in Zilker Theatre’s The Sound of Music, Elsie in The Yeomen of the Guard, and Princess Ida in Princess Ida. 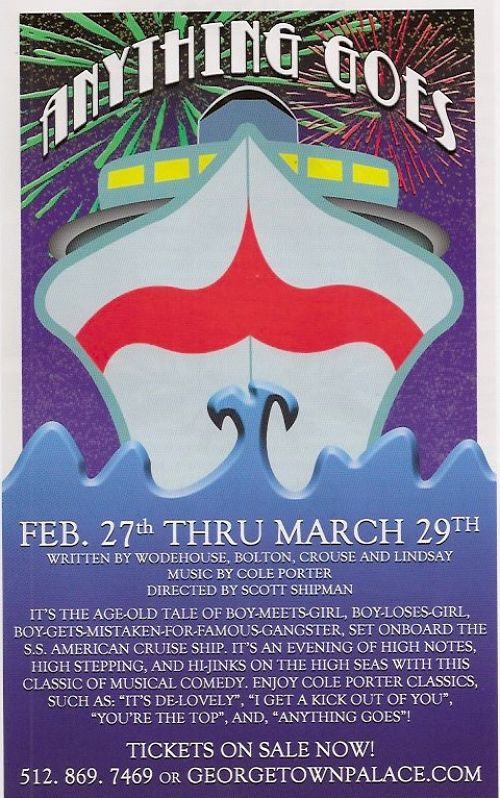