An Enemy of the People
by Vortex Repertory Theatre

The VORTEX’s Summer Youth Theatre presents a contemporary adaptation of Henrik Ibsen’s An Enemy of the People. The timely environmental statement in An Enemy of the People focuses on the contamination of the economic jewel of the town and its focus of cultural tourism: “The Springs”. Written in 1882, the play centers on the politics of greed and corruption that ultimately damage our natural treasures. This summer, in addition to theatrical experience, students will examine the environmental impact of development, runoff, and pollution to the Edwards Aquifer and Barton Springs guided by environmental engineers from our cross-sector partners at GlenRose Engineering.

For more than 23 years, SYT has provided high quality theatre to Austin audiences. This project teams adult professionals with students to create high-calibre theatrical productions of world-class literature. The Austin Chronicle named SYT “Best Theatre Program that Treats Kids like Grownups.” Nominated for dozens of local awards, SYT has been recognized with B. Iden Payne Awards for Outstanding Production of a Play for Children for The Commedia of Errors, Outstanding Direction of a Play for Children for The Commedia of Errors, The Physicists, Moby Dick, and The Frogs, Outstanding Acting for The Physicists and Moby Dick, and Outstanding Sound Design for Machinal.  Every year, students work with adult artists who are among the most celebrated theatre professionals in Austin. Producing Artistic Director, Bonnie Cullum, who founded SYT in 1991, was inducted into the Austin Arts Hall of Fame in 2009.

Summer Youth Theatre is funded and supported in part by VORTEX Repertory Company, a grant from the Texas Commission on the Arts, and by the City of Austin through the Economic Growth and Redevelopment Services Office/Cultural Arts Division, believing an investment in the Arts is an investment in Austin’s future.

An Enemy of the People
by Henrik Ibsen
Vortex Repertory Theatre 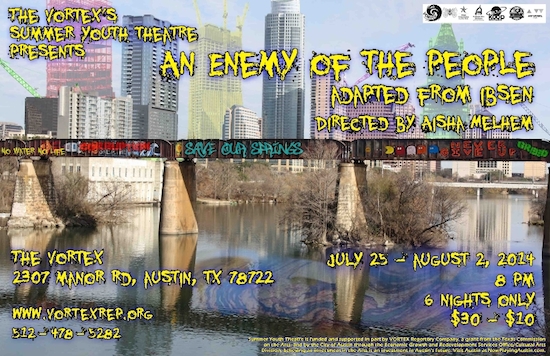