In 1989 Westerburg High School, seventeen-year-old Veronica Sawyer is frustrated with the hellish competitive social hierarchy. She manages to join the popular clique, Heather Duke, Heather McNamara, and their leader Heather Chandler, by proving herself useful at forging notes ("Beautiful"). After discovering that Veronica's friend Martha "Dumptruck" Dunnstock has liked football player Ram since they dated in kindergarten, they make Veronica forge a note from him, confessing he still likes her. She tries to stop them, but is given an ultimatum: give the note to Martha or go back to being unpopular ("Candy Store").

Ram and fellow footballer Kurt pick a fight with the eccentric loner new kid, J.D., and Veronia finds herself attracted to him ("Fight for Me"). She meets him again in a 7-Eleven on her way to Ram's homecoming party. They hit it off and he offers to buy her a Slurpee, saying he uses the brain-freeze to numb the pain of his troubling home life ("Freeze your Brain").

At the party, things get out of control and Martha shows up, thinking Ram invited her because of the note ("Big Fun"). The Heathers try to prank her having her hit a pig piñata with a "Martha Dumptruck" sign around its neck, but Veronica stops them. She decides being popular isn't worth it and resigns from the Heathers, and Heather Chandler informs her they intend to ruin her social life at Westerburg. Feeling she has nothing to lose now, she breaks into J.D.'s bedroom and sleeps with him ("Dead Girl Walking").

After having a nightmare about Heather Chandler tormenting her, Veronica decides to go to her house to apologise, with J.D. tagging along. Heather orders Veronica to make her a hangover cure, and J.D. suggests putting toxic drain cleaner in it as revenge. Veronica says no, but mixes up the drinks and accidentally gives it to Heather anyway, killing her. Fearing no one will believe it was an accident, she using her forging skills to write a suicide note ("The Me Inside of Me"). In the process, she makes Heather sound more deep and complex than she actually was, gaining her sympathy.

With Heather Chandler dead, Duke decides to assume control, taking Chandler's iconic red scrunchie from her locker as a power symbol. Veronica gets a call from Heather McNamara, telling her to come to the cemetery. When she gets there, she discovers McNamara and Duke locked in a car, trying to fend off a drunk Kurt and Ram. With Veronica there, the footballers set their eyes on her instead ("Blue"), but she escapes by feeding them more alcohol until they pass out. The next day, they tell everyone they had sex with Veronica anyway, and she's branded a slut ("Blue (Reprise").

At Ram and Kurt's joint funeral, their fathers decide to accept their apparent homosexuality and work towards making the world more tolerant ("My Dead Gay Son"). Seeing this as a sign their murders are making the world a better place, J.D. tries to convince Veronica they should make Heather Duke their next target. She refuses, saying she wants to give up killing and live a normal life with him ("Seventeen"). Martha asks Veronica for help breaking into J.D.'s locker, as she suspects he murdered the footballers, insisting Ram couldn't be gay because of the love note he wrote her. Scared she'd find something incriminating or J.D. would kill her next, Veronica is forced to remove Martha's suspicions by confessing she forged the note.

Pauline Fleming, the school guidance counsellor, holds a therapy assembly in order to discuss the suicides and prevent anymore from happening("Shine A Light"). Heather McNamara is the only one to step forward, confessing she's thought about killing herself due to ruthlessness of high school ("Lifeboat"). Heather Duke and the rest of the students mock her for it. Angry, Veronica tries to confess to the murders, but no one believes her. Heather McNamara attempts suicide by overdosing ("Shine a Light (Reprise)"), but Veronica stops her in time. J.D. tries to talk her into killing Heather Duke again, but realizing how unstable he is, Veronica breaks up with him instead.

Feeling she's not pretty or thin enough for anyone to ever love her, Martha tries to commit suicide by jumping off a bridge ("Kindergarten Boyfriend"), but winds up in hospital with a few broken bones. Heather Duke passes around a petition for a student suicide commemoration holiday, saying J.D. started it. Veronica's parents confront her about finding proof she's suicidal, and she realizes J.D. plans to make her his next victim. ("Yo Girl"). He breaks into his room and tells her he's changed his mind, believing the solution is to kill the student body that's brainwashing her. He plans to blow up the school while everyone's at a pep rally, making it look like a mass suicide by leaving a note with the signatures from the petition ("Meant to Be Yours").

Veronica decides to put an end to J.D.'s madness, even if she has to die in process ("Dead Girl Walking (Reprise)"). She confronts him as he's setting up the bomb and they fight, causing J.D. to shoot himself. Thinking he's dead and having no idea how to disarm the bomb, Veronica takes it out to the empty football field, intending to save the other students by sacrificing herself. Still alive, J.D. follows her and convinces her to let him take the bomb instead ("I Am Damaged"). The bomb goes off, killing J.D. Veronica takes the red scrunchie from Heather Duke, and declares she's going to make sure everyone at school starts being good to each other ("Seventeen (Reprise)").

Heathers, musical
by book by Laurence O'Keefe and Kevin Murphy and based on the 1988 film Heathers
Harbor Playhouse 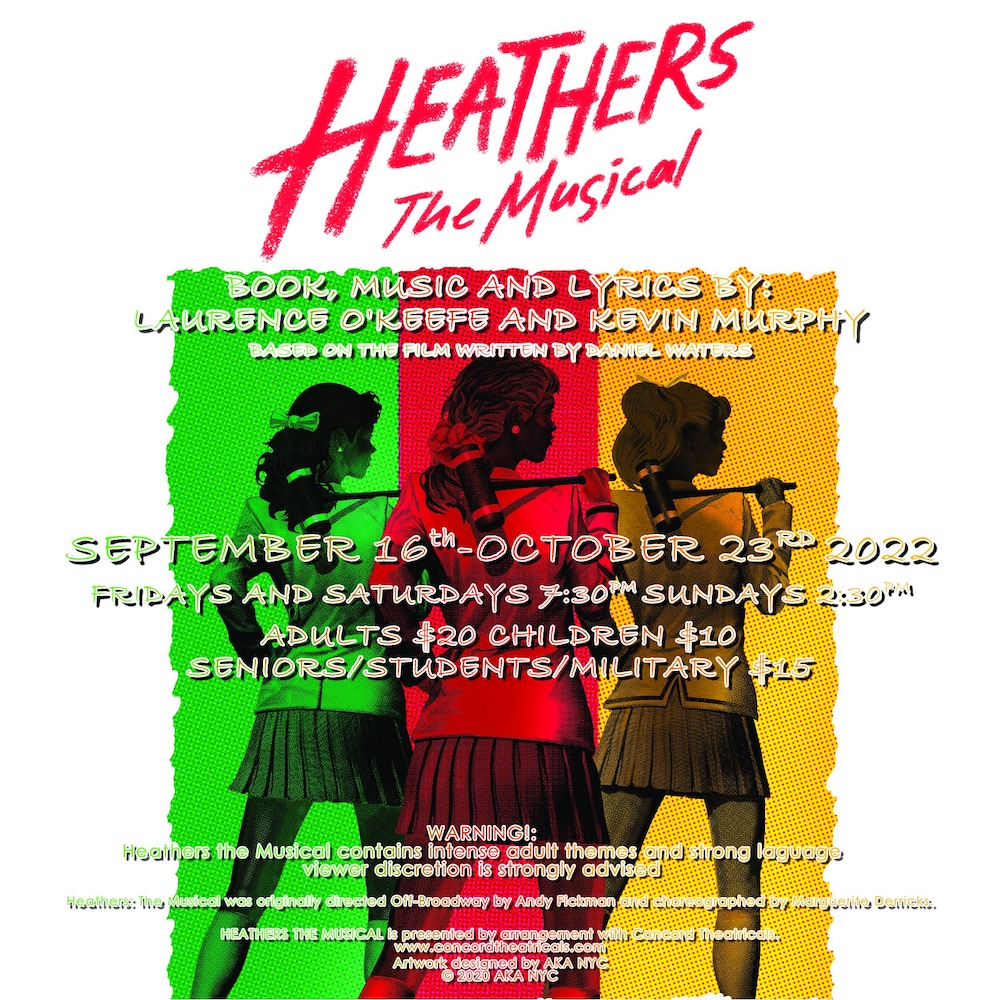