Nat Paradis is a Red Sox-loving part-time dad who manages “Paradis’ Last Convenient Store,” the last place to get gas (or anything) before the Canadian border in northern Maine. When an old flame returns to town, Nat gets a chance to rekindle a romance he gave up on years ago. But sparks fly as he’s forced to choose between new love and old.
This play takes a hilarious and sometimes heartbreaking look at love lost and found, and what it means to “get back to happy.”

Nat finds himself looking for a way to "get back to happy," like the ad for "Elatra" promises, and he may find it when high-school sweetheart "Lurene Legassey" (she goes by "Lu" now), played by Amy Goodyear, comes back to town to bury her mom. But Jeff Cunningham, as long-time best friend "Guy Gagnon," is not at all sure that's a good idea.
Jeffrey Brown is the Director, and Emery Dorman is Stage Manager.

Last Gas is the third play by multi-award-winning playwright/actor Cariani, who also created Almost, Maine, played "Julian Beck" in TV's Law and Order, and starred on Broadway in Fiddler On the Roof (2004) and Something Rotten!, among others. When it premiered at the famous Portland Stage Company in 2010, Last Gas was the best-selling three-week run in the group's history.

The show will open in the VK Garage Theater in Kerrville on Friday, July 15th for three weekends. 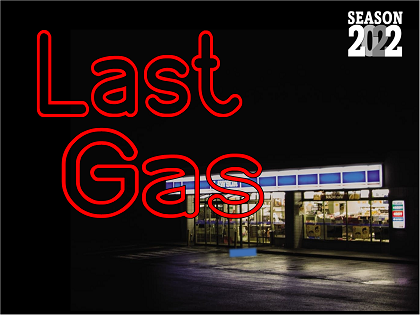