Newsies is inspired by real-life Newsboy Strike of 1899, when newsboy Kid Blink led a band of orphan and runaway “newsies” on a two-week-long action against Pulitzer, Hearst, and other powerful newspaper publishers. Timely and fresh, the fictionalized adaptation of Newsies is high-energy with non-stop thrills, with eight new songs in additional to keeping many of the beloved songs from the film, including “Carrying the Banner,” “Seize the Day,” ”King of New York,” and “Santa Fe.”

“For more than 60 years, Zilker Theatre Productions has brought the magic of musical theatre – at no charge - to the people of Austin and Central Texas, and I am so proud to carry on that legacy for this summer’s production of Disney’s Newsies and beyond,” said Executive Director David Ponton.

Zilker Theatre Productions recently welcomed Ponton as the new Executive Director in May 2022. Ponton brings a wealth of musical theatre experience to this role, having first appeared on the Zilker Hillside in Crazy for You in 2003. Since then, David has gone on to appear another seven times as a performer, co-directed and choreographed Hairspray in 2015, and co-choreographed productions of All Shook Up in 2018 and Little Shop of Horrors in the summer of 2021.

The Zilker Summer Musical is offered at no charge to the public (donations gratefully accepted). Patrons are invited to bring blankets, picnics, and gather with friends and family to watch a high-quality production under the stars.Disney's musical based on the 1992 musical film Newsies, which was inspired by the real-life Newsboys' Strike of 1899 in New York City. The show has music by Alan Menken, lyrics by Jack Feldman, and a book by Harvey Fierstein based on the film’s screenplay by Bob Tzudiker and Noni White. 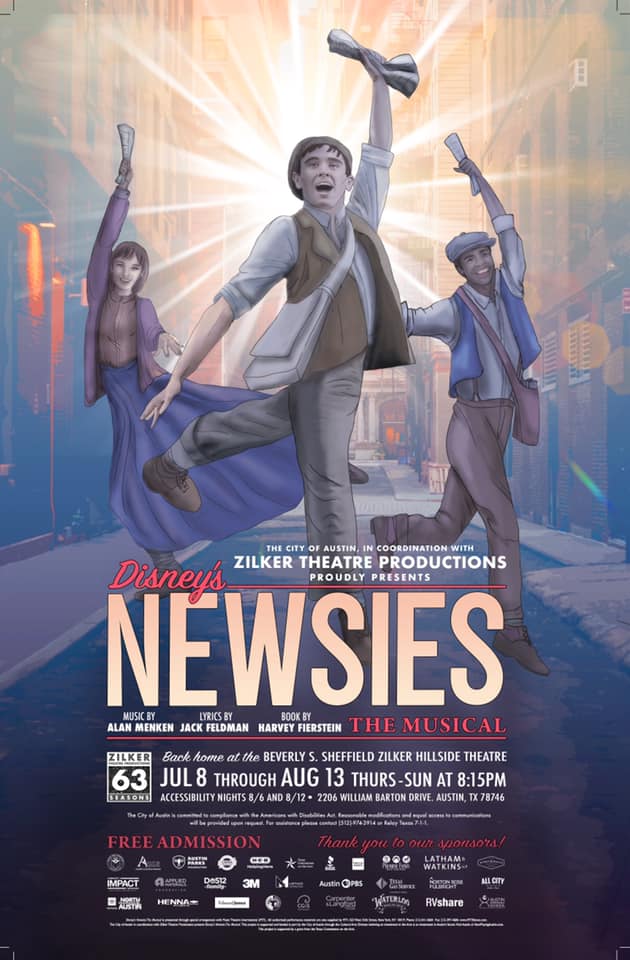