Tales of a Blerd Ballarina
by Vortex Repertory Theatre

A choreo-poem of stories told with humor, dance, and music, Tales of a Blerd Ballerina centers the Blerd (black nerd) experience, embracing diverse communities and generating vital conversations around black identity. This unashamed art pulls concepts and style from both the Afro-Diaspora and Jazz Aesthetic while also focusing on stories of growing up as a Blerd child of the 80's. It is a piece about cultural pride, yearning, and proclamation of self in a world that often wants us to narrowly fit into contrived ideas of what being Black means.

Timely and funny, these initial pandemic workshop presentations provide the springboard for the world premiere and subsequent tour of this delightful new play.

Directed by Florinda Bryant with choreography by Sadé Jones.

Tales of a Blerd Ballerina has been in development over the past year through the support of Performance Platform Austin. The VORTEX is a Core Member of the National New Play Network (NNPN) and is part of the cohort of its new Bridge program which is funding this initial performance. The Bridge Program aims to support work centering BIPOC artists and created through anti-racist practices. Tales of a Blerd Ballerina is one of 18 Bridge projects being presented around the country this year by NNPN Member Theaters.

ABOUT THE ARTIST: Valoneecia Tolbert has been honing her skills as a playwright during the pandemic, with the mentorship of Sarah Saltwick (MFA Playwriting, Michener Fellow, UT Austin) and Performance Platform Austin. She has decades of professional experience as an actor. Recently, she received a B. Iden Payne Award for her performance in the VORTEX Virtual series, The CoviDecameron- Life Reloaded, directed by Rudy Ramirez. In February 2020, she starred in Lisa B Thompson's Single Black Female, directed by Matrex Kilgore and produced by Ground Floor Theatre. Other notable roles in the past few years include Lisa B Thompson's world premiere of The Mamalogues at The VORTEX; Hellena in Hidden Room's The Rover, directed by Beth Burns; Actor #6 in We Are Proud… by Jackie Sibblies Drury, directed by Liz Fisher; Marianne Angel in Shrewd Productions’ The Revolutionists, directed by Rudy Ramirez. She is a company member of Hidden Room Theater, The VORTEX, Shrewd Productions, and Ashé Arts. Valoneecia is an Austin homegrown stage, film and voice actor with a BFA from Texas State University. She is represented by Collier Talent Agency.

ABOUT THE VORTEX: A leader in the growth of the arts and economic stability in Austin, The VORTEX thrives as a unique regional theatre. Our ensemble creates aesthetically diverse world premiere plays and musicals with hundreds of awards for artistic excellence. As a cultural harbor in Six Square Austin’s Black Cultural Arts District, The VORTEX provides a community destination with a spacious Butterfly Sanctuary, food and drink, and an outdoor stage. The VORTEX serves as a catalyst for change, providing theatrical art characterized by direct impact. We engage in radical transformation through edge-walking artistic creations and innovations. Our venue and culture support expanding circles of inclusive community. As a fearless theatre exchange for a shifting age, The VORTEX stimulates inquiry and challenges white supremacy. Our anti-racist lens reflects diversity of people and voices of the BIPOC global majority. As change-makers and truth-tellers for more than three decades, The VORTEX challenges the destructive cycles of industrial society striving for an equitable, life-sustaining civilization. Sustainability centers Earth at our foundation as we envision a green new theatre.

ABOUT NNPN: The National New Play Network is an alliance of professional theaters that collaborate in innovative ways to develop, produce, and extend the life of new plays. Since its founding in 1998, NNPN has supported more than 250 productions nationwide through its innovative National New Play Network Rolling World Premiere program, which provides playwright and production support for new works at its Member theaters. Additional programs - its annual National Conference, National Showcase of New Plays, and MFA Playwrights Workshop; the NNPN Annual and Smith Prize commissions; its residencies for playwrights, producers and directors; and the organization’s member accessed Collaboration, Festival, and Travel banks and online information sessions - have helped cement the Network’s position as a vital force in the new play landscape. NNPN also strives to pioneer, implement, and disseminate ideas and programs that revolutionize the way theaters collaborate to support new plays and playwrights. NNPN's New Play Exchange is changing the way playwrights share their work and others discover it by providing immediate access to information on nearly 40,000 new plays by living writers. NNPN’s Core and Associate Members - along with more than 325 Affiliated Artists who are its programmatic alumni, and the professionals and patrons who comprise its Ambassadors Council - are creating the new American theater.
nnpn.org | newplayexchange.org

The VORTEX Tapas 2021 presents a sampling of new work to limited live audiences, as well as streaming live performances to homes. In April, Valoneecia Tolbert unveils a workshop production of her new play Tales of a Blerd Ballerina at The VORTEX.

The Eloise Stage @ The VORTEX will host Tales of a Blerd Ballerina with a limited, masked, socially-distant audience over two weeks of filming and performance, April 8-18, 2021.

This work-in-progress production serves as a bridge for audiences who are ready to come back to low-risk, live theatre. We will use streaming technology to reach a broader virtual audience as well as providing access to spectators around the country. We will host pre- and post-show Zoom-style events like happy hour, chats with artists, talk backs, and parties, offering the virtual audience an opportunity to connect with the artists and one another. 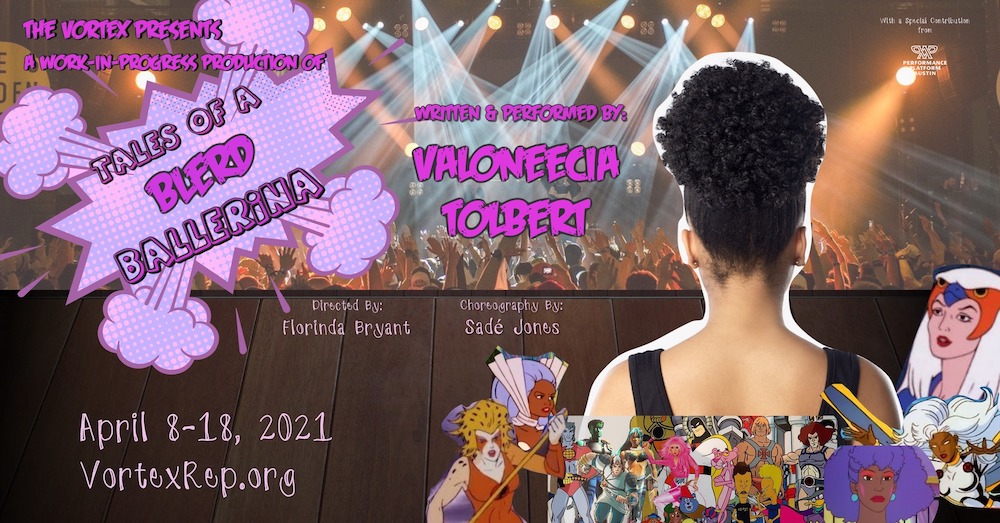