"They’re coming to get you.”

Chaos descends upon the world when the brains of the recently deceased become inexplicably reanimated, causing the dead to rise and feed on human flesh. As the catastrophe unfolds, a young woman who is visiting her father's grave takes refuge in a nearby farmhouse, where she is met by another woman who protects her and barricades them inside. They both later discover people hiding in the basement, and they each attempt to cope with the situation. Their only hope rests on traveling to a local town, which requires braving the hordes of ravenous walking corpses outside.

The Anderson High School Theater Department’s suspenseful production of Night of the Living Dead offers a creepy interactive theater experience this Halloween season as surprises await audience members from the time they enter the lobby and then walk into the graveyard setting inside the theatre.

Night of the Living Dead was an instant hit among movie goers when George Romero’s black and white film was first released in 1968. Since then, the iconic story of the undead apocalypse has become a favorite classic on both screen and stage.

Tickets are $5 for students and seniors and $10 for adults, and are available online at andersontheater.ludus.com

Recommended for ages 12 years and up. 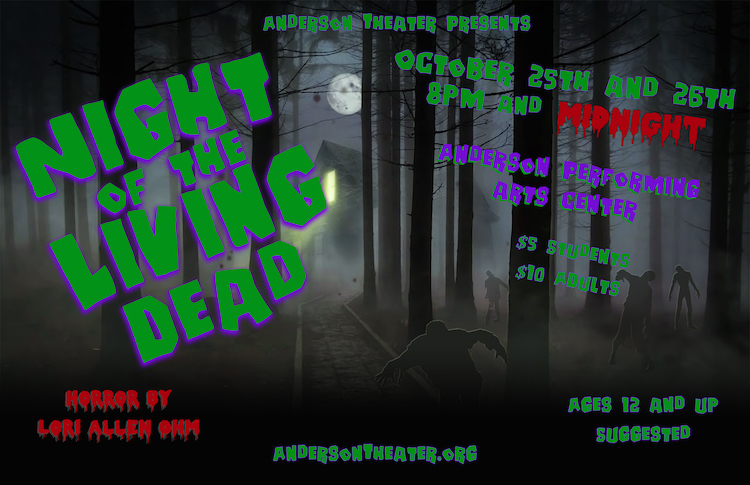