Dionysus in America
by Thinkery& Verse

In an American dystopia, women suffer endless harassment, and right-wing politics wrench away women's control over their own bodies; in response, American women heed the call of Dionysus, and flee to new, strange, euphoric rites in Iraq, the cradle of civilization. General Pentheus, leader of the American war machine, swears to go to the Middle East, liberate the women, and drag them back to the United States. Unfortunately, he operates unaware that his uncle, a transformed and unrecognizable Dionysus, God of ritual madness, has decided to punish America's hubris for rejecting his mother, his divinity, and his seemingly inexplicable rites of devotion.

After developing the play through a grant with Aquila Theater, the most prolific classical touring company in America, Thinkery & Verse works with first-time playwright and combat veteran Jenny Pacanowksi to offer a fast-paced, thrilling re-imagining of Euripides' The Bacchae, as translated by Paul Woodruff, a Distinguished Teaching Professor of classics and philosophy at the University of Texas at Austin. Performances will be at The Vortex.

Costumes by Shakespeare at Winedale

Blue Star Theatre: Discounts for Military, Veterans, and their families.
Radical Rush Free Tickets: Limited free tickets for each performance in the spirit of sustainability,
accessibility, and the gift economy. Radical Rush tickets released at 7pm each night-in-person only 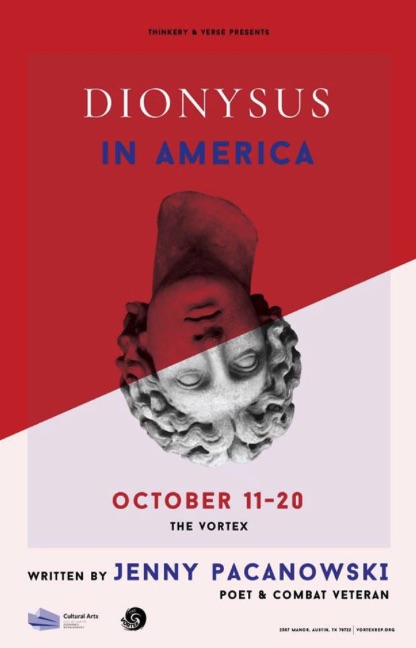 How do theater artists choose what to perform? How do they create an ensemble, design a costume, or craft an argument? In our art, Thinkery & Verse places disparate traditions in …