Back by popular demand, the show draws audience members back in time to 1940 as members of the KPNF radio station present Dickens' cherished masterpiece like you’ve never seen it before. Ebenezer Scrooge, Bob Cratchit, the Spirits and dozens of others are brought to life by a small company of virtuosic voice actors and live foley sound effects reminiscent of "A Prairie Home Companion". Together, they tell the stirring story of an ice-hearted miser who is given a last shot at redemption one miraculous Christmas Eve night!
A Christmas Carol Classic Radiocast is the eighth production in Penfold’s series of live radio plays for the holidays. Associate Artistic Director Nathan Jerkins crafted the adaptation alongside radio scripts for It’s a Wonderful Life (2016) and Miracle on 34th Street (2017).
“Today’s news stories bombard us with frightening displays of greed and violence,” says Producing Artistic Director Ryan Crowder. “Telling stories of hope during the holidays is our way standing against despair and celebrating the noblest human virtues. A Christmas Carol tells us that the ‘good life’ is one of generosity, not selfishness, and that it’s never too late to embrace it.”
The performance features mock radio commercials for local businesses and a nightly cameo role for a selected member of the audience. Glowing with warmth and undeniably evocative of the true Christmas spirit, the performance is a perfect way to ring in the holiday season.
During their visit to Old Settler’s Hall, guests should be sure to take in Christmas Towne, hosted by the City of Round Rock. Located next door to the performance, the Towne features light displays, full-scale carnival rides, light maze, holiday food and more – all coordinated by the City of Round Rock’s Parks & Recreation Department. (See the city’s website for more details.)
Directed by Ryan Crowder
Featuring Robert Berry, Clint Harris, Elizabeth Bernhardt, Julia Lorenz Olson and Bobby Byers 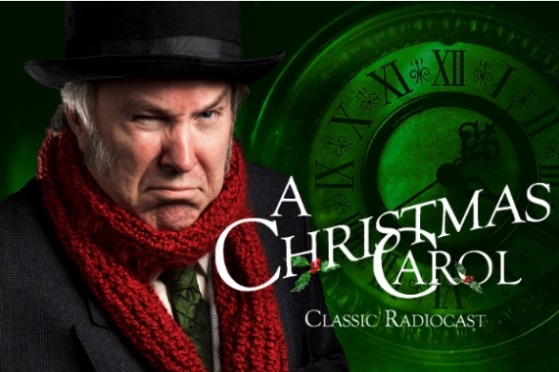