THE ADDAMS FAMILY features an original story, and it’s every father’s nightmare. Wednesday Addams, the ultimate princess of darkness, has grown up and fallen in love with a sweet, smart young man from a respectable family – a man her parents have never met. And if that weren’t upsetting enough, Wednesday confides in her father and begs him not to tell her mother. Now, Gomez Addams must do something he’s never done before – keep a secret from his beloved wife, Morticia. Everything will change for the whole family on the fateful night they host a dinner for Wednesday’s ‘normal’ boyfriend and his parents.

Based on Characters Created by Charles Addams

It’s every father’s nightmare – Gomez Addam’s daughter Wednesday, the Princess of Darkness, has fallen in love with a perfectly respectable man! Come experience the ensuing spooky shenanigans as the quirky Addams family comes together with Wednesday’s boyfriend’s “normal” family.  It’s a night you’ll never forget!  Directed by the Palace’s Artistic Director, Mary Ellen Butler, The Addams Family will find all your giggle spots, with horrified laughter a constant threat!

The show is based upon The Addams Family characters created by Charles Addams in his single-panel gag cartoons, which depict a ghoulish American family with an affinity for all things macabre. Although numerous film and television adaptations of Addams' cartoons exist, the musical is the first stage show based on the characters.  The Addams Family is also the first show produced by Elephant Eye Theatricals.

This musical with its unusual look at ‘life’ began on stage with a tryout in Chicago in 2009.  Opening on Broadway in April 2010, the original cast featured Nathan Lane as Gomez and Bebe Neuwirth as Morticia.  The production closed on December 31, 2011.  A revised national tour of North America began in September 2011.  Awards won by The Addams Family productions are numerous, including the Drama League Award and Drama Desk Award; and the Chicago production won the Jeff Award and has been nominated for several others.  The premiere of The Addams Family in the UK was announced on September 5, 2016, and opened at the Edinburgh Festival Theatre in Edinburgh in April of 2017.  A major UK tour followed.

Mary Ellen Butler, beginning her 15th season as Artistic Director for the Palace, has established a reputation for surprising the Palace audiences at times with her show selections.  This well may be one of those times, and it should be a happy surprise based upon not only her intuition but also upon the amazing cast who came out for this one!  Professionals who donate their time and talent to the Palace in roles they particularly want to do:  Damon Brown (Man of La Mancha 2017) in the role of Gomez Addams; Scott Shipman (Shrek 2014) as Fester; Sheree Bristol (Man of La Mancha 2017) as Morticia Addams; Betty Ortwein (Mame 2018) as Grandma; Diego Rodriguez (Mary Poppins 2018) as Pugsley Adams; and Chris Sundgren (Barefoot in the Park, The Playhouse 2018) as Lurch.  Ismael Soto III (Bert in Mary Poppins) is again taking on the roles of Set Designer and Dance Captain.  Plus a supporting cast of singers and dancers to die for!

The Palace is most appreciative of the generous sponsorship of THE ADDAMS FAMILY by Community Impact Newspaper.  This fine organization has been a Season Sponsor for the Palace’s 2017-2018 Season, and will continue to sponsor the full 2018-2019 season!

Get tickets for THE ADDAMS FAMILY at www.georgetownpalace.com or by calling the Palace Office at 512-869-7469.  On the Springer Memorial Stage at Georgetown’s Historic Palace Theatre from October 12 to November 4, 2018 (four weekends).

*Flex Passes can be used for this show.

Group rates are available for 20 or more.  The Palace seats about 295, with reserved seating paid for in the ticket price.  The Palace office in the lobby of the theatre is open Monday through Friday from 10:00 a.m. until 4:00 p.m. (except for some holiday dates).  Purchase tickets and select seating online at www.georgetownpalace.com or by calling 512-869-7469.  (Please call ahead regarding special needs seating.)  Visa, Master Card, Discover, and American Express are accepted.  Click HERE to go to ticketing page 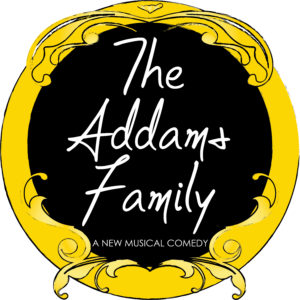