You're A Good Man, Charlie Brown
by Fredericksburg Theater Company

You’re A Good Man, Charlie Brown is a classic Tony-winning musical where Charles Schulz’s beloved comic strip comes to life. Featuring Charlie Brown, Lucy, Linus, Schroder, Sally and Snoopy, the show is a series of brief vignettes surrounding a day of the life of Charlie Brown. Featuring musical numbers such as “Snoopy,” “The Doctor Is In,” “The Kite,” “Happiness,” and “Suppertime,” the Fredericksburg Theater Company production will be performed with a live orchestra.

The musical originally premiered in New York in 1967 and was a runaway hit, playing for five years and 1,597 performances. It was revived in 1998 for Broadway starring Anthony Rapp, B.D. Wong and Kristen Chenoweth, who one a Tony award for her portrayal of Sally. In 2016 the show was revived again for an Off-Broadway production, running for a full year. You’re A Good Man, Charlie Brown is one of the most produced musicals in America, a favorite of professional, community and educational theaters.

Cast in the production are Landon Priess as Charlie Brown, Tristen Geren as Snoopy, Kara Kuczkowski as Lucy, David Wilkinson as Schroder, Hailey Knudsen as Sally, and Taylor Geren as Linus. Steve Reily is the director of the production with musical direction by September Van Der Stool and choreography by Rhonda Mann.

This production has been generously underwritten by Karl Ransleben and Carol Ann Shepherd. 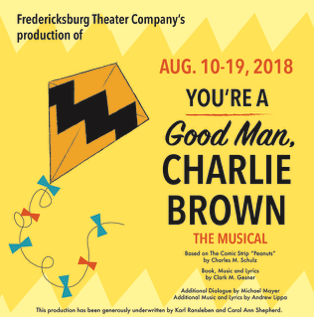