The Santaland Diaries is the perfect Christmas treat for grownups!  This one-man show has been an annual tradition at theaters across the United States for the past twenty years.  FOR MATURE ELVES ONLY!

A wry and witty look at the combination of retail hell and theatrical spectacle that is the holiday season, The Santaland Diaries is a humorous account of Sedaris' stint working as a Christmas elf in "Santaland" at Macy's department store.  ​

In 1992, on December 23rd, Sedaris first read the essay on National Public Radio's Morning Edition.  Well-received, this reading of the piece provided Sedaris with his first major break.  Sedaris later published the essay in the collections Barrel Fever (1994) and Holidays on Ice (1997).  A much longer version of the piece first aired on December 20, 1996, on the Public Radio Internationalprogram This American Life.

Joe Mantello adapted Sedaris' essay for the stage as a one-man, one-act play, which debuted (as The Santaland Diaries) at the Atlantic Theater Company in New York City on November 7, 1996.  Timothy Olyphant originated the role.  Mantello's adaptation has since become a seasonal staple of regional, college, and high-school theatre.

*Only Premium Flex Passes can be used for this Show. FOR MATURE ELVES ONLY!

*Only Premium Flex Passes can be used for this Show.

**Student Rush Tickets $23 at the door with student ID if seats are available.

The Playhouse is located directly across from the Palace Theatre at 817 S. Austin Avenue. It is a storefront that we have transformed into an intimate Black Box Theatre. 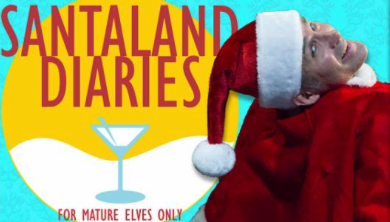