Hoping for a quiet weekend in the English country with some guests, David Bliss, a novelist and his wife Judith, a retired actress, find that an impossible dream when their high-spirited children Simon and Sorel appear with guests of their own. As the guests arrive, it becomes clear that it is not them who will be the problem, but the family themselves.

Kicking off the 2017-2018 season is Noel Coward's classic comedy, Hay Fever.Coward was a playwright, composer, actor and singer popular for his witty works in the English theatre for decades in the mid-20th century. His most popular works also include Blithe Spirit (produced by BCT in 2015) and Private Lives.

Hay Fever takes place over a weekend in a lovely English country house where the Bliss family has arrived for a restful weekend. Judith Bliss, the mother, is a dramatically inclined actress who yearns to return to the stage. She is accompanied by her husband David and their two adult children, Simon and Sorel. Unbeknownst to each other, they have each invited a guest to join them. So the party of four becomes a party of eight. The self-involved family members give short shrift to the guests. Witty unpleasantries abound.

Co-directors Keisha McFerrin and her husband, Allen Rudolph, have a cast of familiar faces as well as several new ones. Cheryl Tanner is Judith Bliss. Michael Duggan plays David. Schedel Luitjen and Hannah Palmer are Simon and Sorel. The guests include Thomas Kloss, Patty Loftis, Timothy Stoner and Ashley Corbaley.  Julie Dupont rounds out the cast as Clara, the maid. Duggan, Palmer, Loftis, Dupont and Stoner have all appeared on the BCT stage; the others are all new. Kimberly Stoner is stage manager.

Hay Fever is being co-produced by Carol Schultz, Lonestar Properties.

Hay Fever is a comic play written by Noël Coward in 1924 and first produced in 1925 with Marie Tempest as the first Judith Bliss. Best described as a cross between high farce and a comedy of manners, the play is set in an English country house in the 1920s, and deals with the four eccentric members of the Bliss family and their outlandish behaviour when they each invite a guest to spend the weekend. The self-centred behaviour of the hosts finally drives their guests to flee while the Blisses are so engaged in a family row that they do not notice their guests' furtive departure.

The show opens Friday, Sept. 8th, 2017 for three weekends. Tickets can be reserved beginning Aug. 21 for members; the box office opens to the public on the 28th.

Reservations can be made by calling the box office at (830) 249-9166 or going online to www.boernetheatre.org. 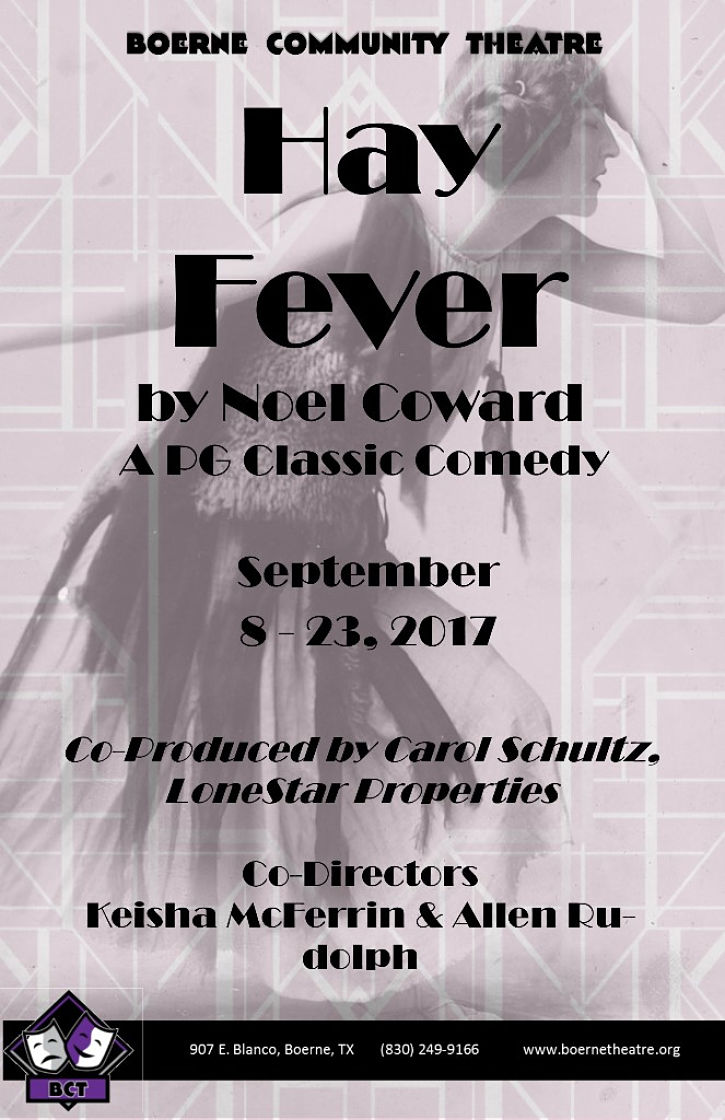