They came together to make music. And together they made history. Elvis Presley, Jerry Lee Lewis, Johnny Cash, and Carl Perkins join forces for one night only on December 4, 1956 at Sun Records Studio in Memphis for the greatest jam-session ever. Relive this legendary night as you rock along to such classics as “Blue Suede Shoes,” “Folsom Prison Blues,” and “Great Balls of Fire.” There will surely be a “Whole Lotta Shakin’ Goin’ On” in the Topfer Theatre for this epic night of music from rock n’ roll’s greatest icons.

Tickets start at $25 and are available online at zachtheatre.org, by phone at 512-476-0541 x1, or in person at the ZACH Theatre Box Office, in the Topfer Theatre, 202 South Lamar Blvd. (corner of Riverside Drive and South Lamar Blvd.) Monday through Saturday, 12 – 5 p.m.  ZACH Theatre is wheelchair accessible.  Discounts are available for groups of 8 or more. Student Rush Tickets are $18 one hour before show time (with valid ID). 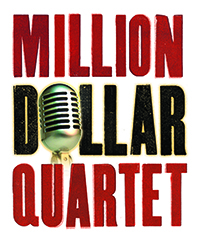