Nearly 50 Austin actors, playwrights, directors, designers and musicians will make 14 world-premiere plays in 48 hours as part of 14/48: The World’s Quickest Theater Festival October 16 and 17, 2015 at THE VORTEX. There will be two performances each night at 7:30 p.m. and again at 10 p.m. Each night features seven different, brand-new plays.

This is the second annual Austin festival. Last year’s inaugural run was a resounding success according to organizers—packed houses, enthusiastic audiences, and many new connections forged between members of Austin’s arts community.

“What makes 14/48 different than other types of theater festivals is the emphasis on community building,” said Noah Martin, the festival’s producer. “We gather the most adventurous artists from all over Austin—from improv to traditional theatre to performance art—and lock them in a theatre for two days with lots of beer. When the festival is over, you see all of these new relationships made, which yield new projects that would never have happened otherwise.”

The format of the festival also yields two nights of wild, unexpected live performance. During 14/48, seven world-premiere plays are written, cast, directed, rehearsed, scored, designed and performed twice in 24 hours. The entire process is then repeated the next day with seven new plays. Participants and audience members have the opportunity to complete the sentence: “I want to see seven ten-minute plays about _____.” One answer per night is chosen at random, and the writers spend the night crafting a play based on that theme. In the morning, directors choose scripts and casts at random. The band writes original music based on the theme, and designers build sets and find costumes.

The steering committee includes Julie Gillis (Bedpost Confessions), Melissa Vogt (VORTEX), and dramaturg and performer Rachel Gilbert. Those interested in participating can also email austin@1448projects.org to find out more about how invitations work.

14/48: The World’s Quickest Theater Festival was started in Seattle, Wash., in 1998 and quickly became a staple of that city’s theater community, bringing together artists from every type of performance discipline and at every stage of their career. Now the festival’s umbrella organization, 14/48 Projects, is helping new communities around the globe start their versions of the festival. Leicester, England, began their 14/48 in 2013. Austin was the second city to embrace the festival—and put a uniquely Austin stamp on it (a little weirder, more breakfast tacos).

Tickets are available through The VORTEX Box Office at 512-478-5282 or at www.VortexRep.org. The Box Office is open from 4:30-8 pm on show nights. THE VORTEX is located at 2307 Manor Road, Austin, Texas, 78722. Use of The VORTEX is made possible through the support of VORTEX Repertory Company. 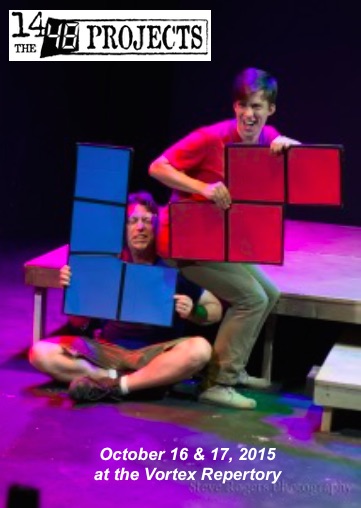