Texas State Opera Theatre commissions World Premiere Opera Lady Bird
The Opera Program at Texas State University has commissioned an opera based on the life of Lady Bird Johnson, to be premiered at a gala event April 28, 2016. The work will focus on Lady Bird as national figure during a tumultuous time in America, featuring her train trip through the Deep South riding down racism after the passage of the Civil Rights Act Of 1964.
American composer Henry Mollicone writes often on American cultural themes, including Gabriel’s Daughter, the story of a freed slave separated from her daughter through slave trade, and Children of the Sun, on the story of the Virgin of Guadalupe. The librettist is Pulitzer Prize winner Sheldon Harnick, writer of the Tony and Academy Award winning Fiddler on the Roof. Support comes from the National Endowment for the Arts.

Details of a gala event in San Marcos, Texas, to be announced.

TICKET PRICES:
$15 Adult
$8 Student, Military or Senior
plus $2 Texas State Presents processing fee for tickets online or at the window. 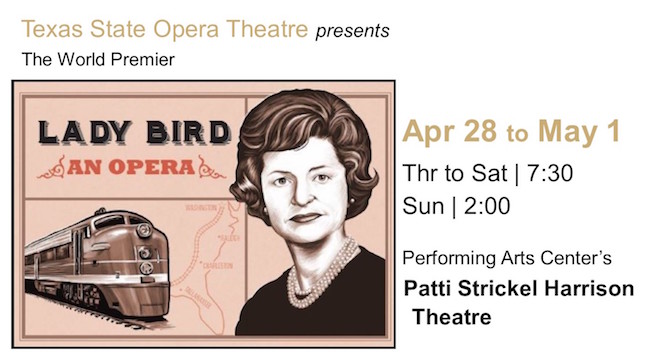