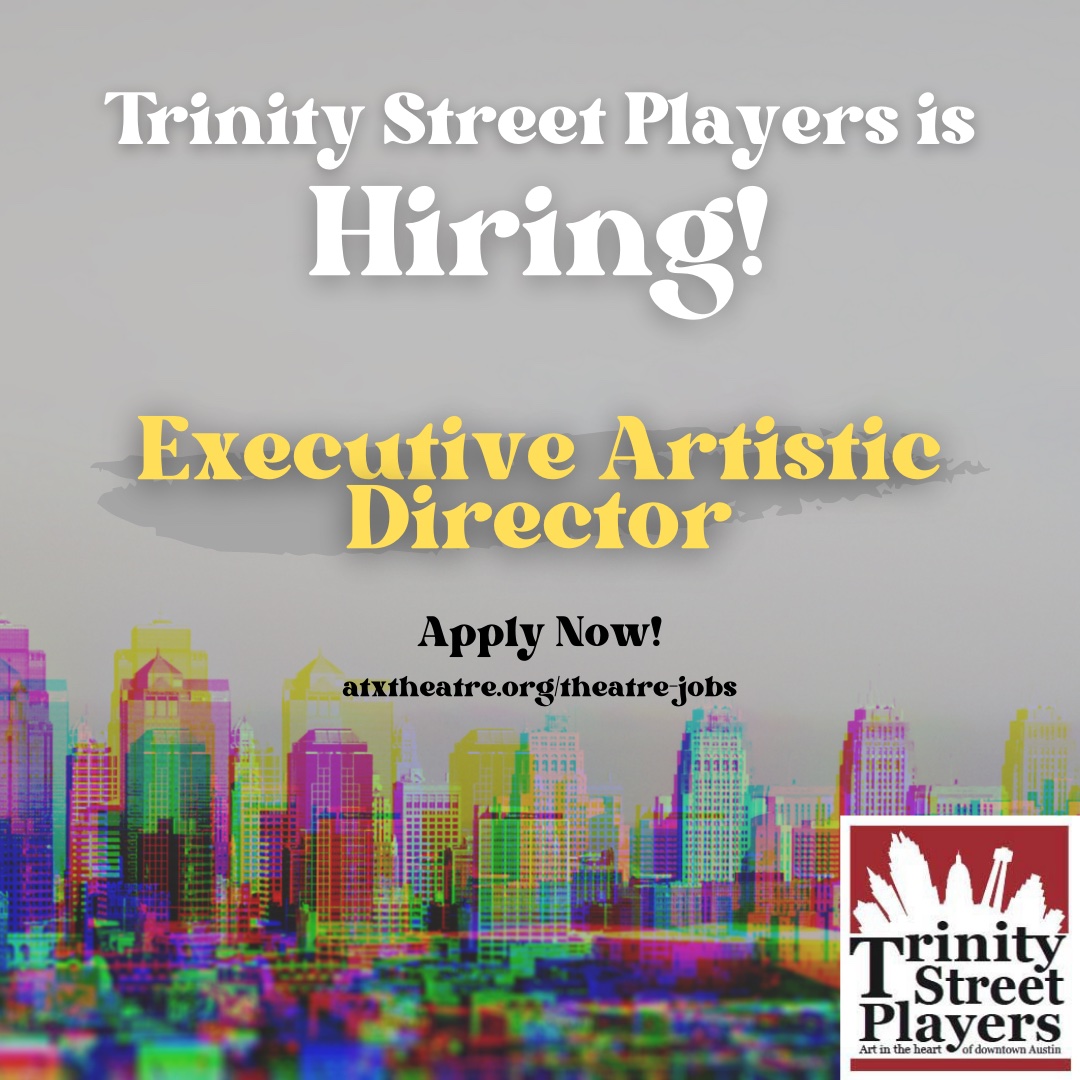 Trinity Street Players is preparing to enter the next chapter of its life with a new leader at the helm. Please click the image above or visit the job posting here for more information.

If you or someone you know is interested in this position and would like to know more or have any questions answered, please reach out to Michael DeWhatley at michael.dewhatley@gmail.com. Thanks for your help in finding our new Executive Artistic Director!

The Executive Artistic Director (EAD) will provide the artistic vision for Trinity Street Players as well as the administrative planning necessary to execute that vision. The EAD is an employee of First Baptist Church of Austin, of which Trinity Street Players is a ministry. The EAD will work with the Theatre Advisory Council to develop a budget and two-to-three show season that embodies diverse voices, styles, and subjects. The EAD will act as an eloquent ambassador for TSP to both First Austin and the artistic communities of Austin that call TSP home. The EAD will provide oversight and administer the operations of the theatre, including the Playhouse, demonstrating a commitment to fiscal responsibility, equity, and accessibility. The EAD position is expected to require an average of 20 hours per week of work.

Anticipated Start Date: September 1, 2022 or as negotiated.
Compensation: This position will be paid $24,000 per year in semi-monthly installments through First Austin.

This position is not eligible for benefits.

The new Executive Artistic Director will be the type of person who appreciates the transformative power of theater and feels joy in bringing that experience to the community of theater performers and lovers. This leader will have an exceptional ability to articulate their compelling vision for the organization, sparking passion and imagination from others. The EAD will be a keen listener and unselfish leader, working to collaborate and empower artists to make great work in a safe and welcoming environment. The successful candidate will be a theater artist with broad experience across a range of work, and will lead in the creation of TSP’s artistic identity. The EAD must be a generous mentor, willing to engage with amateur and young artists.

IN ORDER TO APPLY:

Trinity Street Players is a nonprofit theatre committed to providing free, professional quality, thought-provoking, and entertaining stage productions in downtown Austin. We believe in making the arts accessible, relevant, and inclusive, and we welcome all who share a passion for creating and experiencing the transformative power of the theatre.

TSP is an offspring of First Austin, a baptist community of faith, which houses the theatre’s facilities and (with great leeway) oversees its artistic and financial decisions. TSP is not an independent 501(c)(3) nonprofit, but it does have a separate bank account from the church and donations made to TSP do not go into the church’s ledger. TSP is governed by a five-person Theatre Advisory Council, with a three-person minimum of First Austin members. TSP has historically had 1-3 dedicated staff members, and currently TSP is structured to have an Executive Artistic Director and a Technical Director as its two staff positions (neither are full-time). Guest artists are contracted on a per-show basis, and while Equity performers have worked with TSP in the past, TSP itself has no standing agreements with theatrical unions like AEA, SDC, IATSE, AFM, or USA. Additional staffing support comes from First Austin for things like graphic design, bookkeeping, facilities management and security.

Pre-Covid, TSP had an annual budget of around $55,000, including a $9,000 annual subsidy from First Austin. TSP is still working to return to those pre-pandemic financial levels, and in 2020 experienced a 63% loss of revenue. Rental income provides a little over half of TSP’s overall budget. Current assets stand at around $43,000. With the exception of fundraisers, all of TSP’s performances are free to the public. TSP has no outstanding debts.

TSP is a proud member of the ATX Theatre collective that formed during the onset of COVID-19 and works as a community resource and connector for Austin’s theatrical community. Given the paucity of performance space in downtown Austin, TSP’s ability to provide rehearsal and performance space to other companies is a key part of its mission. TSP hopes to provide safe and accessible space for artists in Austin to work, live and share, and build a body of work that is reflective of its community and is part of that community’s advancement.

TSP is committed to equity, diversity, and inclusion, though it recognizes the privilege it has benefited from as part of a predominantly white church. In a framed poster outside the theatre, TSP states, “In this theatre (and church)...Black lives matter, church and state are separate, disabled contributors are critical, humans aren’t illegal, LGBTQ love is love, refugees are welcome, religious freedom is respected, science is real and art speaks truth, women’s rights are equal rights...and all are responsible to the earth.” TSP is intentional about season selection, casting, and remuneration that is anti-racist and equitable.

In 2007, First Austin allotted $60,000 for the creation of a theater space: a black box in a storage quadrant on the fourth floor. With money and motivation in hand, then Minister of Creative Discipleship, Rev. Ann Pittman, alongside church members Cathy Jones, David McCullars and Linda Miller Raff, began clearing the space, painting it black, building raked seating, ordering lights, curtains, chairs, etc. Dan Hemingson made recommendations on sound equipment which was purchased and installed. Rev. Pittman served as the Artistic Director until 2010 when leadership was turned over to an Arts Team – volunteers from First Austin.

During this time, First Austin noticed a need in the Austin arts community for theatrical space. TSP began renting her black box to a couple of local theatre companies including Penfold Theatre and Scriptworks. Additionally, in 2014, TSP initiated a partnership with Austin Jewish Repertory Theater to produce the award-winning Fiddler on the Roof.

Also that year, TSP began its commitment to new works with a “Workshop Production” series. Scripts still in development received a full-on production including costumed actors, lights, sound, set...everything a playwright needs to garner a sense of what works with the play and what could still use development. Adding to her list of partners, TSP joined MainStreet Musicals workshopping two new musicals which culminated in a performance by Broadway veteran, Tim Jerome, performing on her stage.

In 2017, rentals were at an all-time high with requests for the black box. First Austin hired actor and designer Steve Williams as Technical Director. He designs TSP productions and oversees renters in the space. In 2018, TSP began celebrating her 10th season, and the players finally named their black box. Trinity Street Playhouse became an official location on Google! The Playhouse received official signs outside First Austin on Trinity and 9th Streets.

At the beginning of the Covid pandemic, TSP shut down almost all functions, though they offered online programming like Performing in PJs and I Am the Mask You Wear. In the summer of 2021, they began offering hybrid in-person and virtual cabaret performances. At the end of that year, founding Executive Artistic Director Ann Pitman Zaraté left TSP. Since her departure, TSP has been managed by the Theatre Advisory Council, who together produced TSP’s The Christians, by Lucas Hnath in the theatre’s 2022 season.