Estrada, whose career has spanned the worlds of comedy, dance, and music, is no stranger to the organization. He has directed, produced, and performed in several plays and musicals (A Sign from the Taco Gods, How Burlesque Saved Christmas, Magick: An Evening with Aleister Crowley) on both Overtime stages.

“Jade Esteban Estrada is what the Overtime Theater is all about,” stated Nicole Erwin, managing director at the venue. “He’s original. He does one-person shows. I’ve always admired how he’s navigated his career as a creative artist who’s charted his own course through comedy, music, and theatre. He makes bold choices and he isn’t afraid of trying new and different things. We feel Jade is a perfect fit for us because he embodies our mission. We are thrilled to welcome him as the new face of the Overtime Theater.”

The award-winning performer was elected by the Overtime Theater’s five-member board of directors.

Born at Lackland Air Force Base, Estrada began his theatre journey in the mid-80s as a member of Los Actores de San Antonio at the Guadalupe Theatre. Before moving to New York at the age of 18, he performed in musicals at the Josephine Theatre under Jerry Pollock, Missy Miller, and Aaron Callies. He also appeared in children’s theatre at the Melodrama Playhouse at Hemisfair Plaza and what is now the Blue Star Arts Complex.

As a young thespian, Estrada, who is a former assistant to four-time Tony award-winning actress Zoe Caldwell, was drawn to directing. A graduate of the American Musical and Dramatic Academy in New York, he used his expertise to direct and choreograph stage productions in over 20 countries (Edinburgh Festival Fringe, Fringe World in Perth, Australia), which is what he was doing when he crossed paths with TV star Charo. From 1998-2002, he was her choreographer and lead dancer in hotel and casino showrooms around the country. 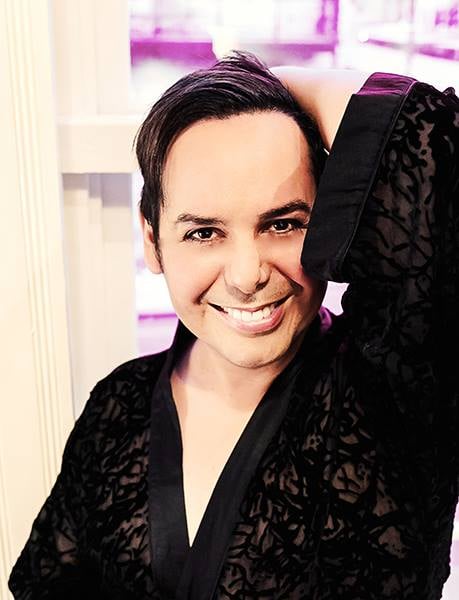 From 2003-2005, Estrada focused on his choreographic work as the founder and artistic director of Experiencia Dance Company, which was housed at Teatro LaTea on New York’s Lower East Side.

For the next five years, Estrada toured his solo musical ICONS: The Lesbian and Gay History of the World, Vol. 1-3, extensively. “You definitely shouldn’t miss New York-based solo performer Jade Esteban Estrada, who has made a career of one-man shows in which he plays various historical gay figures,” wrote the Fort Worth Star-Telegram in 2008.

In 2006, then-Kentucky Governor Ernie Fletcher paid tribute to Estrada by commissioning him the title of Kentucky Colonel, the highest honor awarded by the Commonwealth of Kentucky that acknowledges outstanding ambassadors of goodwill and fellowship around the world. The San Antonio native joined other honorary colonels which include Winston Churchill, Ronald Reagan, Bob Hope, Joan Crawford, Johnny Depp, Muhammad Ali ,and Pope John Paul II.

In 2008, Estrada was commissioned by the Delaware Institute for Arts in Education to write and perform the solo show Juan Bobo & Friends: Latin American Folk Tales.

In 2009, Estrada, who has appeared on Comedy Central’s The Graham Norton Effect, was tapped to host the 19th Annual GLAAD Media Awards which was aired on Bravo TV.

Estrada, whose international credits include playing the role of Flat Top in the German production of Starlight Express, is also the founder of the Acting Masterclass Series, which he launched in 2009. He has since taught in-person acting classes to hundreds of students in the United States, Europe, and Australia. Currently, because of the pandemic, he continues to teach virtually.

“We also love that he’s a teacher so he has that nurturing quality that’s so important,” Erwin added. “I think he has the perfect balance of empathy and discipline to impart to our actors and directors.”

Estrada is perhaps best known as a solo theatre artist. After seeing his 2013 one-person performance of Mike Daisey’s The Agony and the Ecstasy of Steve Jobs at the Woodlawn Theatre, Deborah Martin of the San Antonio Express-News wrote: “Jade Esteban Estrada knows how to draw an audience in and hold them in the palm of his hand.”

Shortly thereafter, he shifted his attention to the stand-up comedy stage.

USA Today’s 10Best.com raved, “Laugh Out Loud Comedy Club should be on the top of your bucket list, especially when headlined by Jade Esteban Estrada from Bravo TV and Comedy Central. Find out when this fabulous comedian is performing in a city near you.”

From 2015-2016, Estrada was the artistic director of Terrible Infants Theatre Company at Prohibition Supperclub in Houston. It was there he launched his self-penned burlesque adaptations such as Masque of the Red Death, Eat Me, a burlesque reboot of Alice’s Adventures in Wonderland, and Tales of a Hard Nut, a burlesque version of The Nutcracker.

From 2017-2019, Estrada brought his burlesque plays to the Overtime’s mainstage. Sinderella and the Glass Zipper, How Burlesque Saved Christmas, and Madame X: A Burlesque Fantasy were all well-received.

Also in 2019, Estrada directed Curanderas and Chocolate: Cuentos of a Latina Life, a solo show written and performed by Patricia Zamora, at the Guadalupe Theatre.

Estrada received an Alamo Theatre Arts Council (ATAC) Award for his 2019 production of A Sign from the Taco Gods, which he premiered at the Overtime Theater.

“I wholeheartedly look forward to returning to the Overtime in this capacity and partnering with the board, staff, and creative team to make this a productive and memorable season,” wrote Estrada in an emailed statement. “I thank the board of directors for entrusting me with this important work.”