REMEMBER, the Tobin Endowment/Alamo Trust Celebration of the Battle of the Alamo: Artistically, Historically and Morally Squalid, by Mike Greenberg

The elephant that wasn't in the room

The most frightening aspect of REMEMBER, an artistically, historically, and morally squalid musical “honoring those who gave their lives for Texas,” was the rapturous response of the premiere’s nearly all-white audience, Feb. 29 at the Tobin Center. The quasi-religious cult that has encrusted the brief, pointless 1836 battle would appear to be stronger than ever.

Remember was produced with the connivance of the Alamo Trust Inc., the quasi-public outfit that operates the Alamo on behalf of the Texas General Land Office. The musical and the Alamo Trust share the same goal: To relate the story of the battle from the sanitized and mythologized perspective of white privilege. The Tobin Endowment, a major supporter of the arts in San Antonio,signed on as a co-presenter – perhaps acting on the misapprehension that there might be something artistic about Remember. 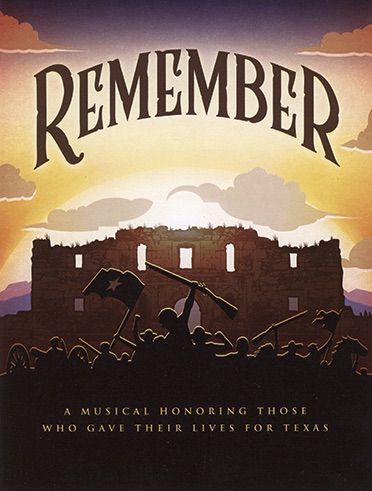 Considered strictly as an entertainment, Remember has little to recommend it. The book and lyrics were written by W. Blake Winchell, a venture capitalist whose biography informs us, “Blake has written six musicals and Remember is the first to premiere publicly.” He structured the show as a historical pageant. Act I introduces the characters through their back stories – the circumstances that brought them to Texas. We also meet Mexico's president, Gen. Antonio López de Santa Anna, and his brother-in-law, Gen. Martín Perfecto de Cos. (One of the few felicitous aspects of the show is the portrayal of Santa Anna as a parody of Donald Trump, a power-mad narcissist who fulminates against the tide of illegals crossing the border.)

Most of the Act II scenes are set at the Alamo, where William B. Travis, James Bowie, Davy Crockett, and the teen-aged Carlos Espalier deliver encomiums to freedom as “Something To Fight For,” to quote the title of a stirring but forgettable crowd-pleaser sung by Travis. Dramatic music and video projections indicate the battle, whereupon Stephen F. Austin and Sam Houston exhort the audience to Remember.

Brett Strader’s music is derivative, borrowing from Dmitri Tiomkin movie scores, Gilbert & Sullivan patter songs, and churchy patriotic-inspirational hymns à la the (Mormon) Tabernacle Choir. Most of the arrangements are bloated and bombastic – a waste of the San Antonio Symphony and a large chorus. (The orchestration credits include Mason Bates, a major composer. He must have lost a bet.) The cast included some excellent singers – most notably Carlos Garcia as Carlos Espalier, Ben Jones as William B. Travis, and Michael Dailey as Stephen F. Austin. The acting – well, if you can’t say something nice….

It was impossible not to notice the elephant that wasn’t allowed into the room. The characters on the rebel side, all misty-eyed and all white, speak and sing repeatedly of the noble cause of freedom, liberty, and independence. In reality, the constitution of the newly independent Republic of Texas brought the immediate legalization of slavery and the institutionalization of white supremacy. Remember studiously forgets that reality.

In this show's rosy realm of rah-rah, slavery never existed, and no Africans or descendants of Africans were ever held against their will in Texas slave-labor camps. Remember doesn’t even admit the existence of the few enslaved black men who fought at the Alamo – and were the only black people to gain their freedom as a result of the Texas revolution, because Santa Anna freed them. The script has Jim Bowie and his brother Rezin bragging about their skills as con artists, but they are silent about their work as slave traders.

Remember has to erase the black population of revolutionary Texas because to acknowledge its existence would be to admit the vacuity and hypocrisy of all that jabbering about freedom.

It is reasonable to suppose that the rebels against Mexico fought to obtain greater freedom for themselves and their white friends and relatives; the slaveholders among them surely desired greater fredom to enslave black people. But it is preposterous to pretend that the rebels were fighting for the freedom of anyone who wasn’t white.

Crockett, as a US Congressman from Tennessee, had opposed the Indian Removal Act of 1830 – as the script of Remember reports – but I can find no evidence that he opposed slavery. Houston, who had lived among the Cherokee, was the only Texas leader who sought  peace with the indigenous peoples, but he both opposed and favored slavery, and he was a slaveholder.

The legalization of slavery was no last-minute caprice by the Convention of 1836. From the beginning of his efforts to recruit settlers, Austin knew that Mexico’s restrictions on slavery would discourage the immigration of Anglos from the United States, and especially the slaveholding planters without whom Texas would have only a subsistence economy.

As early as 1822, Austin wrote of his hope that Mexico would change its law to allow colonists to hold their slaves for life. Mexico refused, so at Austin’s direction the colonists declared that those folks picking cotton were not slaves, who would have to be freed according to Mexican law, but indentured servants – indentured for life. In early Texas, fraud in defense of slavery was no vice. (Like Houston, Austin favored slavery, but he also opposed it – because he didn’t want to see Texas overrun by black people. I’m sure you’ll agree, that was mighty white of him.)

As the break with Mexico approached, it is doubtful that anyone in Texas seriously contemplated independence without fully legalized slavery. Cotton and sugar production, dependent on slave labor, accounted for virtually all of Texas’ exports – and thus for the money that would be available to circulate through the economy and the tariff revenue that would be needed to support essential government operations.

Of course, white supremacy was one of the formative ideas of Texas. The putative republic’s constitution, drafted and ratified in the 10 days following the Alamo battle, explicitly denied citizenship to “Africans, descendants of Africans, and Indians.” Texas independence, Texas slavery, and Texas racism sang in close harmony, as inseparable as the Andrews Sisters.

All of that history is scrupulously excluded from Remember.

The Alamo Trust’s involvement with Remember makes perversely perfect sense. The musical has the same purpose as the GLO’s plan to sacralize  the Alamo – and both bear a striking family resemblance to the Confederate monuments that infested the South in the Jim Crow era. They pander to white Texas chauvinists who like to flatter themselves that the Alamo battle put the militant pursuit of freedom at the center of the Texas character.

In reality, the main legacy of the Texas revolution was a long record of passionate, often violent resistance to the advancement of freedom. De facto slavery continued in Texas long after the Emancipation Proclamation, and the 14th Amendment’s equal protection of the law did not fully apply to people of color in Texas until … well, maybe next year.

To the musical’s credit, it will probably never again trudge across a stage. Alas, we’ll be stuck with the GLO’s Alamo redo for years – but maybe not very many years before it becomes too much of an embarrassment to maintain.

SEE ALSO: "Remember the Alamo for What It Really Represents" by Ruben Cordova, Rivard Report, March 6, 2020