Who was Napoleon before he became an Emperor? Find out in this hilarious, intimate comedy by George Bernard Shaw. Join us in an intimate 19th century tavern setting in a historic setting for an evening of raucous, witty fun and watch the ultimate battle of the sexes. Will Napoleon be defeated before he even embarks on his career of conquest? Framed with a new translation of the sultry letters of Napoleon to Josephine, and served up with a liberal side of romance, this is the perfect Valentine’s theatrical feast.

A fierce young general . . . a mysterious lady . . . a furiously funny battle of wits . . . all over a love letter. Who was Napoleon before he became an Emperor? Find out in this hilarious, intimate comedy by George Bernard Shaw.

Following its epic and critically acclaimed Cyrano de Bergerac, The Archive Theater, along with Pioneer Farms, presents a new interactive theatrical experience set in the Napoleonic era. Travel back in time to a late 18th-century tavern, where a young Napoleon Bonaparte has paused for an evening’s rest after his first triumphant win at the battle of Lodi. Listen to 18th-century music from live musicians, eat French and Italian delicacies, and play period tavern games as you watch the machinations of The Mysterious Lady and the bumbling of the entitled Lieutenant.

Join us for an evening of raucous, witty fun and watch the ultimate battle of the sexes. Will Napoleon be defeated before he even embarks on his career of conquest? Framed with a new translation of the sultry letters of Napoleon to Josephine, and served up with a liberal side of romance, this is the perfect Valentine’s gift for that special someone.

Garrison Martt, the play’s director says: “I’ve always enjoyed the plays of George Bernard Shaw. He creates entertaining stories with interesting characters, witty dialogue and some social commentary. As Americans, we may distance ourselves from his opinions about the English, yet his ideas also translate to our own society”

Jennifer Rose Davis, the play’s co-director, said: “Napoleon is a fascinating, complex figure in French history whom George Bernard Shaw makes approachable and fallible in this wonderfully funny play. Our production of The Man of Destiny also emphasizes the complexities of Napoleon and Josephine’s tempestuous love affair by incorporating new translations of the passionate letters he wrote to her along with Shaw’s play.”

Michael Rodriguez, the actor playing Napoleon, said about the show, “Working with Archive Theater has been one of the most rewarding experiences I’ve had doing live theater. The amount of care and detail they put into every aspect of their productions is something I think all other companies should strive for. You can tell it comes from a place of love from the first audition, which will probably have great snacks.

I’m honored to have the opportunity to take on a role like Napoleon. I should have crippling anxiety about it, but the support blanket of Garrison Martt and Jennifer Rose Davis as directors has helped me sleep at night. What worries me is having such outrageously talented scene partners like Maggie Thompson and Ryan Blakey. Shows will be stolen from me; I know it.”

A limited run of THE MAN OF DESTINY by George Bernard Shaw, a comic drama about an epic battle of the sexes between a young Napoleon Bonaparte and a Mysterious Lady set in the romance and danger of 18th-century Italy, will be presented as a co-production of The Archive Theater and Pioneer Farms at 10621 Pioneer Farms Drive, Austin, Texas 78754.

Tickets to THE MAN OF DESTINY are $25 each for General Admission, $20 each Seniors, and $15 each for Students and Groups of 6 or more which can be purchased by E-mailing info@thearchivetheater.org.  To learn more and purchase tickets online, please visit thearchivetheater.org or call 512.923.2387.

Beverages and Food will be available for purchase prior to performances at the Tavern. Connect with us on Facebook and Twitter:  @ArchiveTheater and on Instagram:  thearchivetheater.

The running time of THE MAN OF DESTINY is approximately 75 minutes with a 15-minute intermission.  For production pictures and video visit: https://www.thearchivetheater.org/the-man-of-destiny 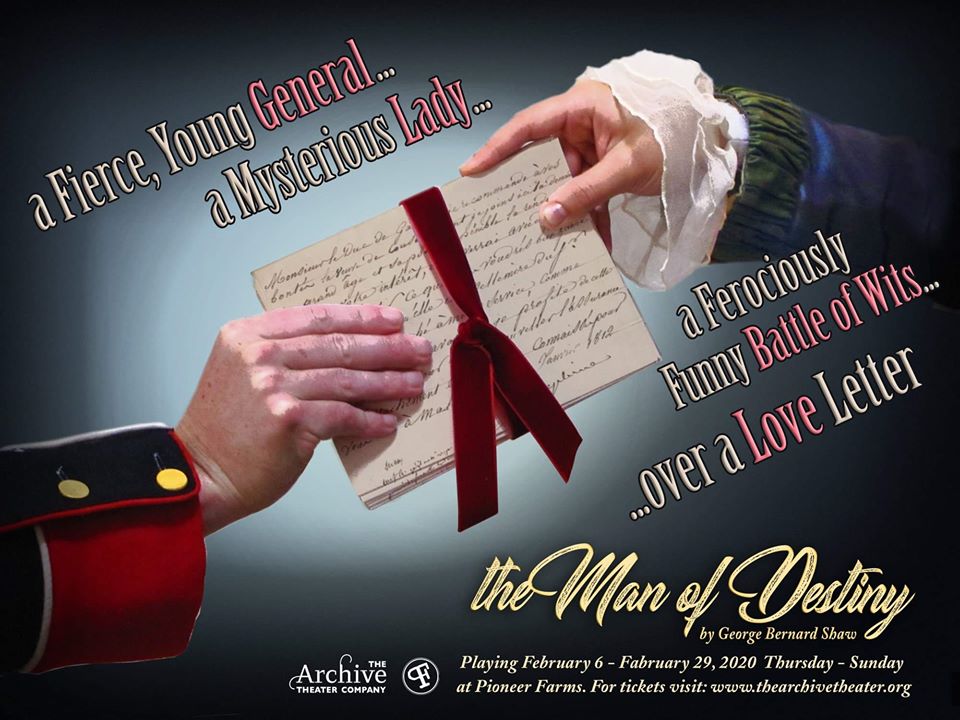