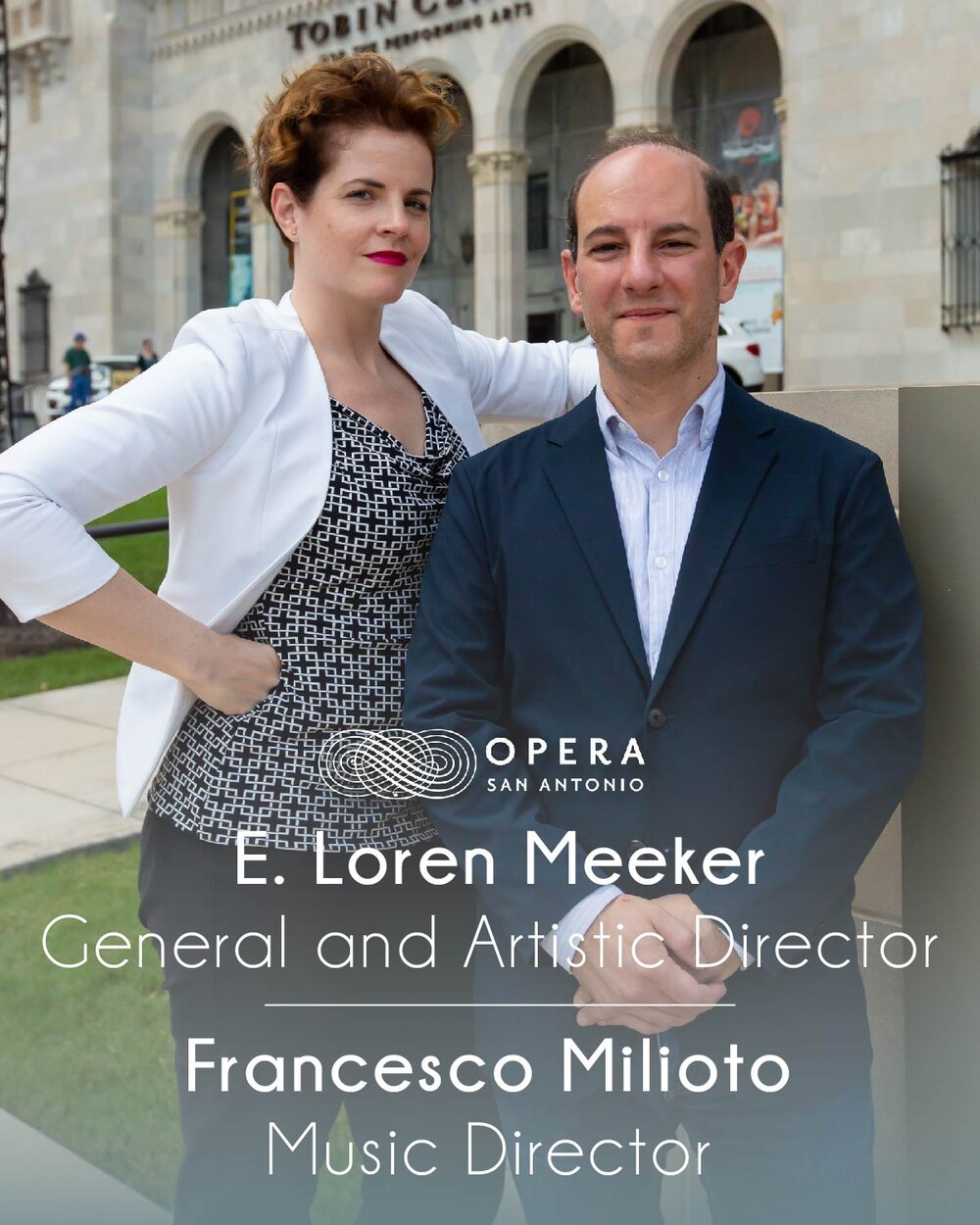 “Loren Meeker is one of the most highly-regarded, emerging leaders in opera, with ties to many prestigious international companies,” commented Blair Labatt, Chairman of OPERA San Antonio. “As a stage director her work has recently been seen at Houston Grand Opera, San Francisco Opera, Lyric Opera of Chicago, Washington National Opera, and The Glimmerglass Festival. She has been a major contributor to the establishing of Opera San Antonio, both as a wonderful stage director on three productions but as a dynamic Artistic Advisor over the past year. In choosing to come to San Antonio as General and Artistic Director, she brings to OPERA San Antonio a unique combination—a known and valued colleague who also has wide experience and a nationwide reputation.”

Ms. Meeker began her association with OPERA San Antonio in the fall of 2017 as the stage director for The Barber of Seville. Since then she has directed productions of La bohème and Tosca and looks forward to directing Rigoletto in the spring of 2020.

Starting in January of 2019 she became an Artistic Advisor for OPERA San Antonio, helping to build company infrastructure, hiring key staff and production personnel, developing future season planning, guiding casting, and raising the artistic profile of the company. “It is truly an honor to be named the General and Artistic Director of OPERA San Antonio,” says Ms. Meeker. “I am grateful to Blair Labatt and the Board of Directors for trusting me to grow the company into an artistic institution that the city of San Antonio can uphold as one of its cultural pillars. It has been a gift to work at OPERA San Antonio and perform in the beautiful Tobin Center. I look forward to working closely with the amazing staff, artists, and musicians who form the core of our company along with the patrons, volunteers, and audience members who are so generous with their love and support of this incredible art form. Together we will shape a magnificent future for opera in San Antonio.”

Ms. Meeker will use her seventeen years of operatic experience as a basis for crafting the trajectory of OPERA San Antonio’s future. Her directorial work has garnered worldwide acclaim for her keen artistic vision and rich, measured storytelling. With an international career spanning engagements across the United States, Argentina, Singapore, and France, Ms. Meeker looks forward to becoming a resident of San Antonio while continuing her directorial career with upcoming engagements at Florida Grand Opera, Washington National Opera, and Austin Opera. A diverse artist with a background in dance and theatre, Ms. Meeker is especially regarded for her unique, cross-genre perspective, which she regularly brings to her work on the operatic stage.

In addition to Ms. Meeker’s appointment, OPERA San Antonio is appointing Francesco Milioto as the company’s first Music Director. Mr. Milioto has conducted La traviata and Tosca at OPERA San Antonio and will return in the spring of 2020 to conduct Rigoletto in collaboration with the San Antonio Symphony. As a conductor he debuted last season at Lyric Opera of Chicago and recently worked with Arizona Opera, The Dallas Opera, Chicago Opera Theater and Numi Opera. In addition to being an Artistic Advisor to the Florentine Opera in Milwaukee, he is currently on the music staffs of both Lyric Opera of Chicago and the Santa Fe Opera.

“I am so excited and grateful to have been given this incredible opportunity,” states Mr. Milioto. “From the very beginning of my relationship with OPERA San Antonio I felt a wonderful sense of support and respect as an artist. The company’s dedication and enthusiasm for producing opera at the highest level is inspiring. I look forward to working with Loren and Blair, our wonderful staff, and the incomparable San Antonio Symphony to further establish OPERA San Antonio as a world-class opera company.”

“In his two projects in San Antonio, La traviata and Tosca, Francesco Milioto has shown a tremendous gift with singers and established a special rapport with the orchestra of the San Antonio Symphony,” comments Mr. Labatt. “Those who have had the great pleasure of working with him have all benefited from his cooperativeness, his positive attitude, and his ability to adapt. I think everyone who has seen his work appreciates his ability to bring all the musical elements together to create great operatic magic. We look forward to having him back in San Antonio again and again.”

Mr. Labatt went on to say, “The appointment of Loren Meeker caps a wonderful year for OPERA San Antonio, a year in which a group of advisors—Loren Meeker, Garnett Bruce, and conductors Francesco Milioto and Robert Tweten—have worked together with great corporation and collegiality to select and cast our productions of Faust and Tosca and also to guide our vision for future seasons. The appointment of Loren and Francesco means that San Antonio’s opera company now has a full and truly distinguished professional staff.”

OPERA San Antonio is completing its fifth year as the resident opera company at the Tobin Center for the Performing Arts, producing two major operas a year. This season the company expands to include a winter concert version of The Capulets and Montagues, Bellini’s setting of Romeo and Juliet. Performances are February 13 and 15, 2020 at the University of the Incarnate Word, conducted by Anthony Walker, and featuring The Agarita Chamber Players. This spring OPERA San Antonio returns to the Tobin Center with Verdi’s Rigoletto. The original production was created by Tomer Zvulun for Boston Lyric Opera, Atlanta Opera, and Opera Omaha. Ms. Meeker will direct the production in San Antonio and Francesco Milioto will conduct. Tickets for both shows are available online at https://www.operasa.org/productions

OPERA San Antonio’s major funders include The Tobin Endowment, The Kronkosky Charitable Foundation, The City of San Antonio, Bexar County Commissioners Court, The Russell Hill Rogers Fund for the Arts, and The National Endowment for the Humanities.

OPERA San Antonio was formed to bring world-class opera to San Antonio as the resident opera company of the Tobin Center for the Performing Arts.