Stop the Presses, a melodrama
by Way Off Broadway Community Players

Sleazy Tab Lloyd, a nasty villain, is running for mayor, but Miss Aspen Print won't endorse him. Instead, she writes articles supporting his opponent, an honest politician named Edward Torial. And has the complete support of the Sheriff, Jack Newsworthy. Lloyd however still wins the election -- via trickery. What happens when a Pony Express rider shows up without his pony? Who is Swampwater Sam? The whole town, Including Mrs. Pickles, Mrs. Grisley, and Sleepwalking Granny, shudders as freedom of the press is threatened when Sleazy Tab Lloyd gains control of "The Clarion" and stuffs each issue with utter nonsense! The highlight comes when lloyd has to jump from state to state to avoid arrest, trying not to get cornered! Of course, all ends well when our villain is defeated in the hilarious finale!

Auditions for the Melodrama "Stop the Presses" directed by Mel Szabo, assisted by Shelly Kelly, will be held at Way Off Broadway Theater at 7 pm on Monday, June 6, 2016. Roles include 7 females, 5 males, and townspeople of either sex and of various ages.

Auditions consist of cold readings from the script. All are invited to try out!

FEMALE ROLES:
*Aspen Print - Editor of the “Colorado Clarion”, she is a combination of beauty and civic responsibility. Without her, the truth would never be free. Nor would the telegraphs.
*Judy Paige- A newspaper girl, who is about as bright as grimy letters of the printing press. She may take things a little too obviously. Just don’t tell her to take a hike.
*Granny Print- The aging typesetter who also owns the “Colorado Clarion”. As befuddled as she can be, the citizens should be wary of giving her too big of a task.
*Mrs. Grisley- A solid citizen, concerned for her community.
*Mrs. Pickles- Another of those solid citizens, also concerned for her community.
*Chiffon DeLure- A lovely lounge singer but not one to be trusted. She’s not as oily as Sleazy but she’s not squeaky either.
*Annabelle- Chiffon’s winsome maid. Her brief appearances only further showcase her experience in being a quiet and discreet maid.

MALE ROLES:
*Panhandle- A bop on the head is worth two on the knee. The classic bumbling sidekick to the crooked villain.
*Sleazy Tab Lloyd- Speaking of crooked, this villain comes as crooked as the rest of them. He has a lot in common with the printing press. They’re both oily.
*Jack Newsworthy- The manly sheriff in Four Corners desperately in love with Aspen. Alas, he needs a win to feel worthy enough to ask for her hand.
*Edward Torial- Our next mayoral candidate. He may be the dullest, but at least he’s honest!
*Dusty- Our express rider who’s lost his pony. He’s not so express now.

AND OTHERS:
*Citizens- Our cheering, jeering, growing population.
*Nar R Ator- Not only does this character create the scene, but also connects the audience by leading the reactions. 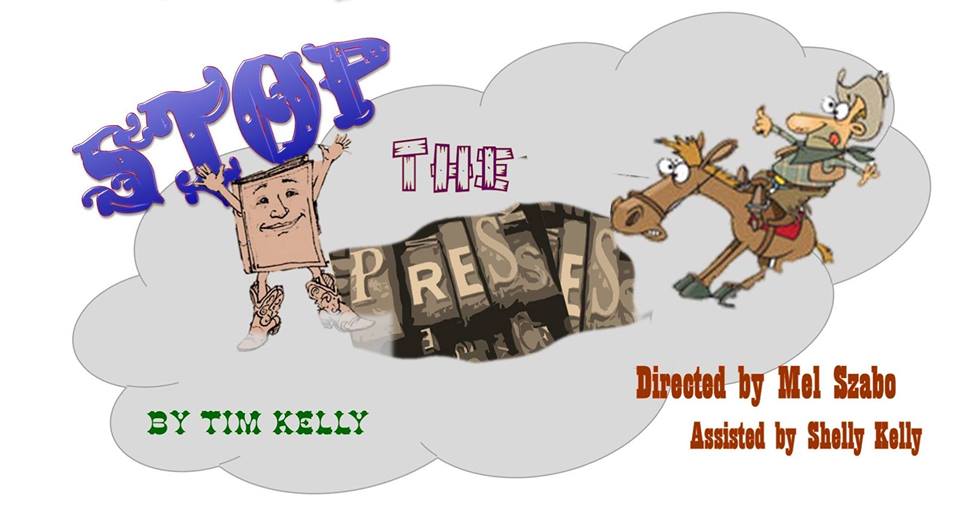