Getting Into The Habit
by Way Off Broadway Community Players

Into the quiet convent of St Philomena in Maine, a famous middle-aged film star comes looking for sanctuary. The only way she can stay is by “getting into the habit” and fooling the resident nuns (who are neither meek nor unsophisticated) that she is authentic. When her handsome young husband comes looking for her, she has to persuade him that she is an authentic nun. Maybe she can fool the other nuns, but will she be able to fool the man she loves…? And what are the consequences she must face for her outrageous behavior in this holy sanctuary?

This is the world premiere of this delightfully funny show!

Way Off Broadway Community Players will be holding open auditions on Monday, February 29, 2016 at 7pm for the fifth show of Season 19, Getting into the Habit by Morna Martell. It is being directed by Rick White. Auditions will consist of cold readings from the script.

There are roles for 7 women and 1 man.

Auditions are open to the public and will be held at Way Off Broadway Community Players’ theater,
located in building 4 of the 2243 Business Park at 11880 West FM 2243 in Leander,
1 mile west of Hwy. 183, just east of Bagdad Road.

Helena Moncrief
Helena is an aging actress fighting time, her age, and a cheating younger husband

Sister Emelie
Emelie is Mother Superior and a longtime friend of Helena. She leads by example, not a ruler across the knuckles.

Sister Peter
She believes she would be much better than Emelie as Mother Superior. She would use the ruler.

Sister Felix
Felix is feisty but has been in the convent too long. She knows almost nothing about current affairs.

Sister Andrew
A no nonsense nun with a law degree.

Sister Martin
The convent’s cook. She definitely tastes everything she cooks. She’s also prone to a bit of gossip from time to time.

Roland D’Auguste
An attractive actor in the middle of the best years of his career. 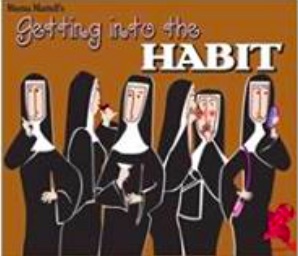