A Murder Is Announced
by Way Off Broadway Community Players

An announcement in the local paper states the time and place when a murder is to occur in Miss Blacklock’s Victorian house. Surely, this is a joke. But, when the lights go out, so does a victim. What follows is a classic Christie puzzle of mixed motives, concealed identities, a second death, a determined Inspector grimly following the twists and turns, and Miss Marple on hand to provide the final solution in a dramatic confrontation.

Auditions Monday, April 18, 7 p.m. at the theatre in Leander

Miss Marple – A quiet, elderly woman; unassuming yet driven with an iron will; she will not be deterred from the truth
Miss Blacklock – Middle aged woman constantly concerned with her position and prestige – fear of losing both guides her actions
Dora “Bunny” Bunner – An old and treasured family friend whose elevator no longer seems to reach the top floor – prone to being unduly flustered and confused
Julia Simmons – Young woman – Somewhat spoiled, concerned about Miss Blacklock, but also concerned about getting her share
Mitzi – Highly excitable overly imaginative woman, displaced by war from eastern europe – deeply impressed with her own importance to the household and apparent victimhood
Phillipa Haymes – A young widow who has already experienced much more in life than she had ever anticipated – kind, loyal and primarily concerned for her son’s future
Mrs Sweetenham – A meddlesome middle aged woman – social climber, constantly seeking means to improve her prestige

Patrick Simmons – Young man – idle rich, professional student – would rather create schemes and plots than work towards own advancement – prone to deception and pranks
Edmund Sweetenham – Young man – part time writer, burgeoning communist – waste of oxygen, dreams may yet inspire him to get out to embrace and tackle life
Inspector Craddock – A dedicated, if unimaginative plodder – clever enough to know his own limitations and willing to consider all inputs for clues
Sergeant Mellors – Yeoman like veteran – has seen it all and doesn’t care much for those who won’t ‘shoulder the wheel’
Rudy Scherz – A reprehensible villain whose odious nature is obviated only by the brevity of his existence

Auditions are cold readings from the script. Casting that night. Bring your schedule to document any conflicts. 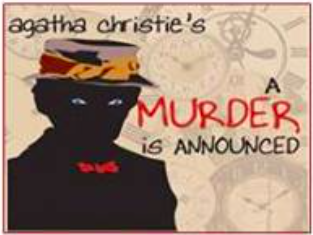